“ Our best machines are made of sunshine; they are all light and clean because they are nothing but signals, electromagnetic waves, a section of a spectrum, and these machines are eminently portable, mobile […] People are nowhere near so fluid, being both material and opaque. Cyborgs are ether, quintessence. “
Is what Donna Haraway once wrote in her 1985 manifesto. In this text Haraway describes the blurred boundaries between human and animal, animal-human and machine, and physical and non-physical.

We are all cyborgs. This text and assumption is what inspired me to rename my blog into “Sunshine is in my Throat” in 2007. If you ever wondered, thats that. 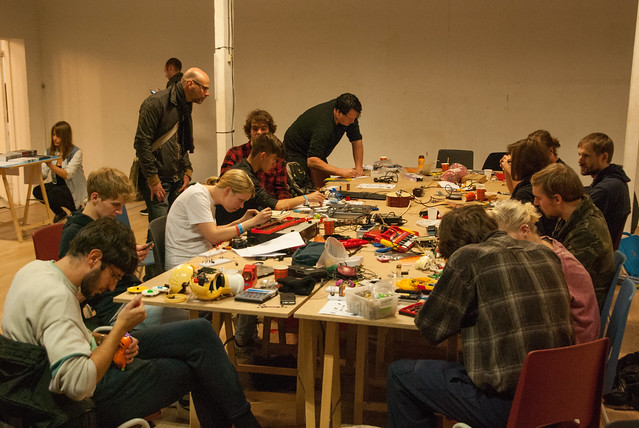 The hacklab however is hosted in a back room, away from this collection of new Dutch Cute. The location kind of reinforces the ‘group’ feeling but also makes it harder for outsiders to enter during the day. A lot of the Dutch Design visitors only dare to peek into the room of noise and then move on. I guess they see this weird nest of wires and feel that this is not what they came for.
The day starts with a workshop hosted by Gijs Gieskes , who lives in the neighbouring village Geldrop. In my opinion, Gieskes, a qualified industrial designer, is best described as an electro-magician. His creations are some of my favourite contraptions in the world of electronic art. Their existence oscillates between conductive drawing, synthesizer and breaded wire clusters, that act as objects I would have thought never needed to exist. But then, when I finally encounter them, their existence does seem necessary somehow. Maybe Gieskes’ greatest contribution to contemporary music is the ways in which he continuously expands the field of musical instrument building.
A hard drive embedded in an analogue synth kit, a Casio that keeps crashing and rebooting following only the rules of chance art. Euro rack modules that light up the room while a clock keeps step. It’s funky.

The Stigma of the Wire

We start by breadboarding simple LED oscillator circuits. Soon these designs patch into other weird musical toys, in which the LEDs play only an uncertain role. Throughout the eight years I have known Gijs and his work, he has become more and more a LED man. These days I believe every device he builds incorporates several if not many of the little lights that blink in response to electrical pulses.
While our tables gradually fill with LEDs, pieces of plastic, toys, wires and resistors, Gottfried Haider and I talk about the general act of concealment at (media) art events. Wires are tucked away, circuits are obfuscated and surfaces polished white (or indeed pastel). These easy-on-the-eye surfaces actually strengthen the stigma of the wire: as a sign of production wires seem to signify the mindset ‘it was just created, it must be dangerous’, or ‘with this product we indeed failed to participate in the great wireless age’. The actual circuitry, which is where I believe the magic of electronics lives, is not part of the final presentation. According to this superficial divide, the artist-engineer can only exist in the back room, where knowledge lives, but where the audience keeps away.
But then again, maybe it was just Dutch Design week and we focus on (end) design here. 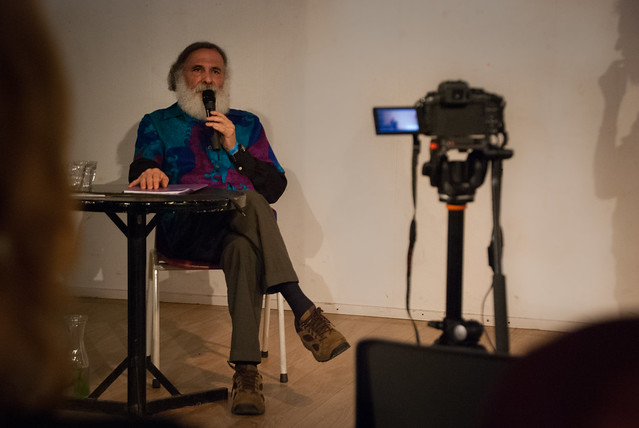 Kairos as moment/um
A lecture begins. Hillel Schwartz takes us on a hike through a cultural history of noise, or as he calls it, ‘a poetic excursion of grime and time’. Schwartz explains how the Greeks divided the experience of time into three different forms.
First there is aeon time. This is universally ongoing and impersonal time. As an eternal flux and flow it is always ‘just there’. Schwartz connects aeon time to background noise, the noise that has been there since the Big Bang, the noise that will always exist and is usually suppressed but remains part of any system.
Secondly, there is Kronos, from which the term ‘chronology’ stems. Kronos refers to linear, one directional time, business time or incremental, daily routine time. Schwartz connects Kronos to repetitive noise, such as the noise of a dripping faucet. It is sickeningly rhythmic and does not move backwards.
Finally there is Kairos, which is best described as the time of opportunity. This time is dangerous and thrilling, however it can also present itself subtly. Schwarz connects Kairos to the noise of revolution. It is the shriek of invention. The time when someone urges you to seize the moment.

Schwartz states that there is no word in modern language that can function as a translation of Kairos. However, I believe that moment/um** would take its place gracefully. As I described in  the Glitch Moment(um) The concept of moment(um) is twofold:

first of all there is the moment, which is experienced as the uncanny, threatening loss of control, throwing the spectator into the void (of meaning). This moment then itself becomes a catalyst, with a certain momentum. Noise turns to glitch when it passes a momentary tipping point, at which it could tip away into a failure, or instead force new knowledge about the glitch’s techné, and actual and presumed media flows, onto the viewer.” (p. 31)
**I have started to write moment(um) as moment/um for a while now, for Barthes-tic reasons – I don’t understand how I got away with writing it with parentheses to begin with. 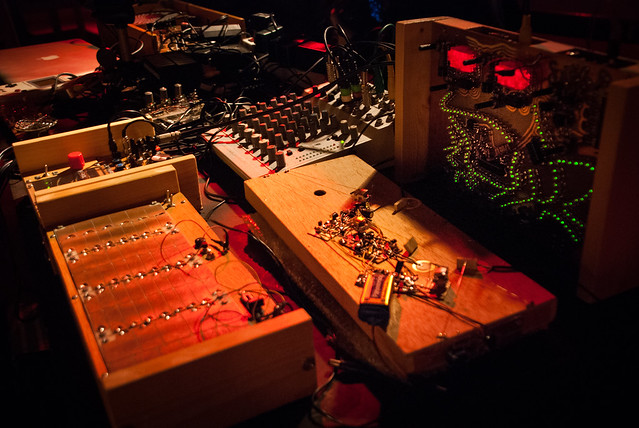 For purposes of illustration: a wonderful moment of Kairos or moment/um takes place when the performance evening finally breaks. Gieskes’ table looks, as always, like a Wunderkabinet of electronics. Everybody stands very close, to catch a glimpse of the intrinsic instruments he is about to play. I think they expect the noise concert to start any time now and they are all probably listening for some kind of noisy composition.
Gieskes’ kairos
Gijs introduces the instruments and his practice with the help of video examples and funny internet anecdotes. Sometimes he plays the sounds of the instruments and provides a voice over, in order to explain what we are listening to and why it looks and sounds the way it does. A couple of minutes in, a visitor behind me asks when Gijs will finally start playing his concert. I laugh quietly because I know that this is already the concert. We are here, right now.
Gijs’ untraditional form of concert composition is easily mistaken for a show and tell. Or maybe it is in fact a show and tell performed as concert. Whatever it is, when I ask Gijs about it, he confirms it definitely is a concert to him.

I don’t think we should see Gijs’ concert derive as an isolated event or praxis. There is of course a long tradition of artists who realise that during a concert, they do not strictly have to please their audience. A concert mode offers many forms of freedom that artists can take advantage of – time, space, instrument or composition are just a few of the parameters of this freedom.
What is new to me is the introduction of reflective narration about music and the perfomance of instrument as show and tell as a concert mode. Although the voice and narration as instrument surely is quite traditional. In any case, its besides the point of Kairos to get all historic here.

Another concert I recently visited comes to mind: Goodiepal at the Dentist, London, August 2014. Goodiepal is known to talk a lot during his concerts, mimicking or emulating music genres, while using his voice or mouth, sometimes more than any other instrument readily available. Goodiepal masters the art of tactical whistling, breathing – in and out – and singing new moment/um into classic and cliché, pop and folk music genres. Interestingly enough, right after Goodiepals concert last August I witnessed a similar kairos-resistance event. Someone came up to Goodiepal and asked: do you ever even play music at your concerts anymore?
Whether it is /*because or */although the voice is the oldest instrument out there, it definitely makes for one of the most scrutinised, yet interesting instruments I have witnessed of late (open the floor to Holly Herndon references later). Especially when it comes to a genre that has the Lyrebird as its spirit animal – a bird who has sunshine in her throat.

“what bird has the most elaborate, the most complex and the most beautiful
song in the world. My guess is that there must be lots of contenders, but this bird must be one of them. The superb Lyrebird from South Australia.” – David Attenborough.

A little write up of tonights opening conversation between Kristoffer Gansing, the artistic director of the Transmediale and Lorna Mills on Abrupt Diplomat, a solo exhibition by Lorna Mills at the Canadian Embassy. _______ Kristoffer Gansing: Can you say a bit more about the animated gif and its role in online cultures? Lorna Mills: Well, [...]