By Rob van Kranenburg
As I walk up to the check-in at Capetown Airport, the man looking at my documents nods and says: I have only one question, I saw you writing a long letter on your computer, what were you writing? Oh, I said, you will like it. It is about how amazed I am that you have come so far in only a decade or so. People are talking to each other. The amount of seemingly drugged men getting killed just because they want to cross a highway will get less. After my talk at Michaelis, several people came up to me, one a young black guy from Khyelitsa. He said he wanted to get more information to get out to the people there. In another decade there’ll be many more listeners from the shacks. Who knows they might wireless them? Though you will have to get tough – not a problem at all! for SA boys and girls – as you cannot invest in 48.000 people pouring into the Cape region every year and move your own people from shacks into these villages that we saw standing on Look Out Hill. First you create a mental model that maps the actual territory in the avant-garde places, such as Capetown. When you prove that to work, then other regions will follow. For that you need time.

So I tell him I was writing how my message to the Dutch new media scene and broader cultural, social European discussions will be that we need to deeply study the last decade in SA, how a situation that could have resulted in full fledged civil war, has been frame worked in a society that negotiates daily serious contrasts in embodied negotiation with all forms of otherness. Mapping that experience will be a challenge for SA. Such a repertoire of ways of dealing with tensions, contrasts and insecurity is becoming rapidly relevant to our Western European societies.

He smiles but I don’t think believes me.

The number 4 that made a hattrick for Johannesburg just now looks a lot like Willy, but then a Willy in a very healthy, unHIV very likely version. I could not give him any money just now walking back from the Mexican at 13 Bloemstreet here in Capetown, because I had given him 10 euros on my way up to Long Street where he cornered me holding out his hand with I slapped, twice. He said he’d been fooled by this guy handing him 10 for 10 knowing it was worth 60. He also knew that countries such as Austria and France took euros. I had a vegetarian dish full of carrots and sour cucumbers, two tortillas, spicy chips (sliced very thin), guacamole, coriander paste, jalapeno peppers, two bottles of sparkling water, one home made lemonade, yummie. For dessert a double espresso and a delicious chocolate cake tipped with chocolate and ice-cream kissing up to the cake. It came a 140 Rand. The 60 that I gave him must have been a huge sum for him to handle in one transaction. I told him just now that I could only give him once, not twice a day. I’m back here in the morning for a coffee I said, I’ll give you something in the morning. But I’m going to school in the mornings he said, please mister, what about the blue note? That fiver in your pocket. Ah, but that’s a twenty I said. I can’t give you a twenty. We and there I stopped my flow as I had been meaning to say, we aren’t very rich, not rich at all, Willy. Me too I have to think about what I spend at home and here, here too. So I broke away from his hand (he had been holding mine during our talk), and said: take care Willy. I’ll catch you here tomorrow evening and I’ll see what I can do then. Walking home, just around the corner, Holyroad art deco building, where I sit just now overlooking the park and Table Mountain staring right back at me. Listening to Eddie Vedder singing here I stand head in hand turn my face to the wall. If she’s gone I can’t go on. How could she say to me love will find a way. Gather round all you clowns to hear me say. Hey guys you got to flaunt your love dress her up in mighty mighty colours dress her up as if you could enfold. How could she not say to me love will find a way? It is just people saying things like that. Just people. Just now.

Shelter from the storm. “Happy belated congratulation, this the second of October in Guinee’s history as they got their independence from France in 1953.” Italy repatriates illegal African immigrants. My worry is there is a lot of negative headlines, says one of the newsreaders, picking up newspapers and picking out stories at random. Where is our country going? Send us your thoughts,180degrees@sabc.co.ac. This is by far the most interactive newsprogramme I’ve ever seen. And the next time, they start dancing! To the tunes of one of their acts on the show. The amount of vocal grooming on SA television and in the streets is huge. Every one is smiling, laughing, hugging, chatting, and chatting instead of, well, instead of making war. At first I came in with a detached European cynicism. All this dancing about, could it be real? Wasn’t it just a lot of acting? Until I realized how I get fooled again into believing that there is a default in acting. There is none! This is real. I have to live up to it.

As my whip cream is being made, being slapped right behind me after I have eaten my Prego steak to the bone. I have actually eaten everything on my plate. I do that because of another good remark by Charles Maggs, you just don’t waste food in Africa. If that is the one thing I bring out, it will be one that change my life drastically. I think I can stick to it.

That is just spin man, says Johann van der Schijff when I stumble over my words in my haste of telling him about this woman, Yvonne Methuen, group leader of MTN telecom. Now this is what she spins on a Monday South African morning: Africa’s profitability is one of the worlds best kept secrets, she begins quoting Kofi Annan. Wireless technology might help Africa leapfrog. It is the fastest growing region in terms of mobile uptake. Cellular connectivity is providing rural access. Yes, Africa is at the centre of ICT growth in the last few years. But says Yvonne Muthien, doing business is not enough. There is a demand on business to public accountability. Business must invest in sustainability. Business should be caring. So it comes down to leadership. What kind of leadership cares about communities? An intuitive leadership that balances emotional intelligence with analytic skills. Who that? Women, baby! Shelter from the storm. I say: call her bluff!

“Now they are fighting over what you gave them”, a thin black well dressed guy wearing glasses sideremarked me as I walked up Queen Victoria Street. I know I said how hard it is to know what is right. What is right? Walking up with two bottles of sparkling water in my hands I offered one to the four black men that seem to live there, to live on the pavement. One man grabs them both. I take one back as I want a glass of sparkling water in the evening. He grabs my hand and asks for money for food. As I go through my pockets, stand aside somewhat another man steps up to my right. He gently shoves him out of my direction thinking I’d frighten into giving nothing when the other guy is to close. I give him 40 rand. I’ve already given Willy 20 just a few minutes back urging him to go the school and be a bright kid. I realize I have to stop handing out money like this. I walk. I don’t have a driver’s license. In Capetown to walk is to negotiate at every ten steps. So yes it is true, they are fighting over my 40 euros. A guy is screaming. 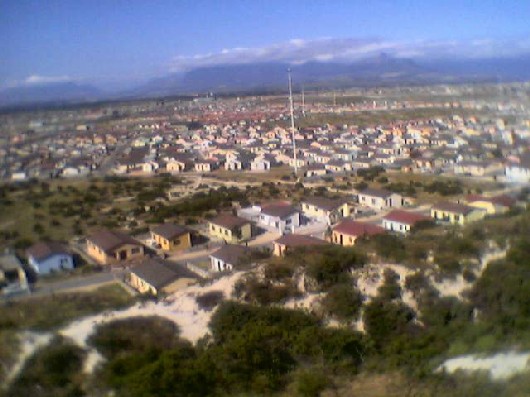 White men in here! Where? In Khayelitsa. One white man lived there once, I am told, nobody bothered him, and then one day he left. This says Johann, is Kaplan’s metaphor. We are doing it. We are driving in this limousine through the slums with our windows closed and the airco on. There is a slight difference. We are driving in Johann’s bakkie. It does not have airco. But the windows are closed and Johann has made a left turn into the belly of the beast, taking a curved left straight into Khayelitsa, shack territory on the other side of Table Mountain; on the other side. Ten minutes ago we were up on Look Out Hill, overlooking the newly build villas. There are very few people out there. In the shacks there are people all over. It is very clean in new villa land. The twenty centimeters that bridge the wall and the street are clean. People taking ownership of public territory seems to be the clue. I stand looking out on Look Out Hill as if I have been doing looking out over shacks and villas on Look Out Hill all of my life. All I really do is scan the territory for bodies, black bodies. No such bodies around. I breathe as we debate urban planning and setting up a new media outpost in the new tourist facilities that workers are building. Ah now! No such bodies about. I breathe. Smile. But now I don’t. I don’t smile. A drunken man staggers across the street, no pavements. In the shacks that are made out of everything, I see eyes not even noticing us. Two white men in a white bakkie. Windows up. It is perfect VR, I’m immersed in a painting whose format I only relate to because of television formats. White men in here! That is usually the rally car for turning it upside over. My stomach goes shrinking. I’m scared. There is no way I can relate to people out here, not coming on foot, not mediating our visit, how can I experience any other notion but that of going to the Zoo? If I were them, I’d turn the car upside over. And yet, for all our whiteness – car and us – we attract little staring really, just glances. Empty stares, too. Empty stares. I’m not literate enough to read that void. I’m not smiling. But someone is. Old lady smiling at me. Old lady smiling.

Imagining Possible Worlds with “Aesthetics of the Commons”

Part of a series by the Institute for Contemporary Art Research at the Zürich University of the Arts, Aesthetics of the Commons investigates the fruitful intersection between the idea of the commons, and the aesthetics of practices that relate to the concept. Overall, the publication ponders how to enact a shift in academia, arts and [...]

Ulises A. Mejias: Alternate Realities and the Logic of Data Colonialism

Remember Alternate Reality Games? As some observers have pointed out, QAnon definitely feels and functions like an ARG. It’s got open and collective storytelling, multiplatform content, puppet masters, die hard players, hidden clues… a blurry boundary between fiction and reality. Conservatives and progressives like to accuse each other of deficient skills when it comes to [...]

What Is the ‘Great Reset’ Really About? A Public Debate in Posters

‘Will the post-corona universe be just another future or something new “to come”?’ – Slavoj Žižek Corona is a reset. A chance to learn. An opportunity to grow. After all: never let a good crisis go to waste. True enough, there’s plenty of injustice in the world to justify a thorough reset. But the question [...]