Under Delusion, Maartje Fliervoet, ‘t Hoogt Utrecht
Yesterday evening (October 12, 2004) Amsterdam based video artist and photographer Maartje Fliervoet guided a crowd through here constructed misty worlds, inspired by cinema classics like Les Temps du Loup (Michael Haneke 2003), Il Deserto Rosso (Antonioni 1964) and Solyaris (Andrei Tarkovsky, 1972). Ruud Bakker, Hoogt4, introduced the program by pointing out a news announcement. Apparently Etos (a Dutch drugstore chain) plans to use mist in pursuing shoplifters. Once the alarm goes off, a mist machine will immediately blow smoke into the store. In their confusion, shoplifters will hopefully drop their loot and will get caught, assuming the security guards can find them in the mist…

In her photos and videos, Fliervoet makes time stand still. People hang around, silently dreaming. It’s hard to recognize if they are stranded or just waiting for something, and if they are either hurt or happy. Fliervoet: “Life these days can be so hectic. The world seems to be technology driven, worldwide distances can be bridged in a split second, the clock sets the pace, and time is money. Looking at the recent New York Power Blackout, we can conclude that when technology fails, people suddenly seem stranded as if on a deserted island”. 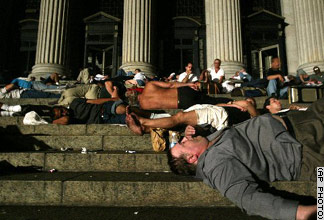 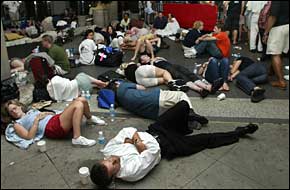 Having worked part-time at the Amsterdam Filmmuseum for years, Maartje Fliervoet knows her cinema classics. In the program, that took place at ‘t Hoogt in Utrecht, she showed a sequence of slightly edited fragments of misty scenes by among others Antonioni (Il deserto rosso, 1964 and Identificazione di una donna, 1982), Michael Haneke (Le temps du loup, 2003), Andrei Tarkovsky (Solaris, 1972) and Francis Ford Coppola (Apocalypse now, 1979).
Fliervoet threw her light on the inspiring features of these scenes, and the stunning fragments did the rest. After this, she shifted her focus onto films that feature a certain experience of time. She concluded showing film fragments on people lying about, cuddling in public space. For years now, Fliervoet has been secretly photographing couples kissing and cuddling in public spaces like parks. Touched by there vulnerability and relaxedness, and their indefinable shapes (especially if the people wear wide fitting clothes, it’s hard to see who’s who?). By alternating all these fragments with her own work, she clarified her method of working without taking away the magic of her work.

In ‘t Hoogt café, site specific work from the series ‘Under Delusion’ is exhibited. Fliervoet shot the photos and videos on shows in the café where the work is currently shown. A serene, subtle and magic world slowly opens up to you as the photos deem up from the walls. The slightly unsettling videos show the deluded Hoogt crew, hanging about on the bar, the tables and floors of the misty bar. The exhibition can be seen at ‘t Hoogt until October 31. Go there while visiting Impakt festival.

Imagining Possible Worlds with “Aesthetics of the Commons”

Part of a series by the Institute for Contemporary Art Research at the Zürich University of the Arts, Aesthetics of the Commons investigates the fruitful intersection between the idea of the commons, and the aesthetics of practices that relate to the concept. Overall, the publication ponders how to enact a shift in academia, arts and [...]

Ulises A. Mejias: Alternate Realities and the Logic of Data Colonialism

Remember Alternate Reality Games? As some observers have pointed out, QAnon definitely feels and functions like an ARG. It’s got open and collective storytelling, multiplatform content, puppet masters, die hard players, hidden clues… a blurry boundary between fiction and reality. Conservatives and progressives like to accuse each other of deficient skills when it comes to [...]

What Is the ‘Great Reset’ Really About? A Public Debate in Posters

‘Will the post-corona universe be just another future or something new “to come”?’ – Slavoj Žižek Corona is a reset. A chance to learn. An opportunity to grow. After all: never let a good crisis go to waste. True enough, there’s plenty of injustice in the world to justify a thorough reset. But the question [...]