Douglas Kahn, founding Director of Technocultures Studies at University of California (Davis) spoke on the final leg of his ANAT tour across Australia, organised by Sarah Last.

Kahn opened with a recording of John Lennon, Yoko Ono, Chuck Berry, and David Rosenboom “performing” live brain wave tunes on CBS’s Mike Douglas Show in 1972. It’s entertaining footage: Rosenbaum’s keyboard solos smother out any precise comprehension of what is actually going on, while numerous shots capture Mike in blissy listening mode. Kahn traces this mainstreamed countercultural interest in brainwaves back to physicist and US Air Force researcher Edmond M. Dewan, who demonstrated in 1964 he could manipulate technology (a light bulb, later a computer) through simple mind control – essentially managing the output and transduction of his brain’s alpha waves. It was Dewan that had sought the company of composers, and Lucier was one of few to take him seriously. Dewan suggested to Lucier the idea for Music for solo performance, yet today receives the credit of technical support. Kahn gave a rich “immanent” reading of this Dewan/Lucier work of ‘outer’ expression beyond the bounds of the body itself, in which the resulting sound triggers not sound, but the intention to continue performing making a sound, by essentially absenting any intentionality or visual imagery from the brain.

Kahn links the spatial, EM, and systems thinking of Lucier, Cage, Paik, Dewan and also Wiener, who studied with Dewan, historically, and considers their interest in brainwaves as only one aspect of an “audible and naturally-occurring electromagnetic spatiality, the other being on a geophysical scale, with the intervening space caught somewhere between the Cold War and counter-culture”. EM (except for visible light) needs technology to be experienced (via “transduction-in-degree” or “transduction in kind”) yet art and media historians often don’t know how to talk about this sort of work except in terms of ICT devices; there is no antiquity to electromagnetism. Kahn focuses on a materialism of forces that sees artists take up different positions at different levels of the electromagnetic spectrum. So how do you write a natural history of the media, or theorise ICTs in terms of nature? Kahn suggests four periods in the historical engagement with the electromagnetic spectrum in the arts.

1. The media archaeological moment of aelectrosonic media: Thomas Watson’s pleasurable listening in on the Whistler’s (VLF sounds of EM waves hitting the earth) picked up by Bell’s telephone wires, long before Luigi Russolo’s Art of Noises Manifesto, and 20yrs before the ‘discovery’ of radio.

This was a highlight presentation of Re:Live and great deep-space media theory. The talk ended with ANAT’s thank you drinks for Kahn which was a nice moment to actually catch up and meet other conference attendees. 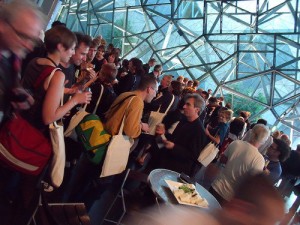