Gunnar(DE) has demonstrated the project ‘Parasite’ by the Berlin-based collective TheGreenEyl.

The Parasite is an independent projection-system that can be attached to subways and other trains with suction pads, using the speed of the train as parameter for the projected content. The projection starts with the train moving inside the tunnels. To Gunnar these tunnels bear something mystic yet mundane, ‘most people usually have never made a step inside any of them,’ he says. ‘Parasite’ confuses the routine, habits and perception of the train-travelling-journe. The ‘parallel worlds’ – projected with ‘Parasite’ – allow the train traveller a glimpse into a different world full of surrealist imagery. Pointing out what it is outside to one who is sitting in the train is an original idea that stimulates people and also a creative way to fill the ‘empty’, boring time of the daily journey. 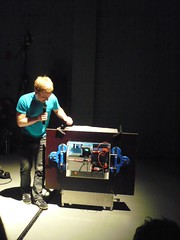 I find that the videos are a really nice entertainment. To watch one of them, go here.

Christopher Kelty: The Internet We Could Have Had

Ten years ago I began writing a book. It was going to be called Power/Sharing and would pick up on my previous book Two Bits: The Cultural Significance of Free Software. It was a turbulent time: the occupy movement, M15 and the indignados movement, the protests in Tunisia and Egypt, protests against legislation called SOPA/PIPA, [...]

OUT NOW – THE PSYCHOLOGY OF THE WEB DEVELOPER, REALITY OF A FEMALE FREELANCER

The Psychology of the Web Developer, Reality of a Female Freelancer By Maisa Imamović Underneath the user interface of any website—be it simple or complex—lurks the web developer’s struggle with money, prestige, and power. An ever-lasting race to the top, never not working. Yet what are these unseen costs of being a traditional web developer, [...]