Matthias Oostrik (NL)is an artist trained in interaction media from the Nederlands Film and Television Academy in Amsterdam, whose artworks focus primarily on the dialog between human presence and technological interventions, particularly, the discovery and exploration of its own presence by the interacting body. His interactive installation E4.1 Bijlmer Moodwall (2009)is installed at a tunnel in the Amsterdam Zuid-Oost (South-East) district and won the Dutch design award for best product in the public domain. Originally conceived as the Motionwall (2007), one of his earlier creations, the Moodwall was adapted for a lower resolution screen at the Bijlmer under the commission of Urban Alliance. Both of the installations are screens that create colourful patterns revolved around the movements that are tracked in front of it.

At the Test_lab, Oostrik showed a demonstration of this first installation, and explained that the aim of creating the wall was to use the human body and its most basic functions: movements to develop a direct relationship between the audience and the art work (real body and the virtual body).

The installation is done with the help of a program called Quartz Composer that takes the live image of people in front and tracks the movement by subtracting each object position from its predecessor position. The motion is then blurred till the elements finally blend in to form a silhouette that is merged with colourful patterns and interactive sound.

Though the screen resolution at Bijlmer only allowed for a low resolution that compromised on the quality of the silhouettes, Oostrik remarked that one of the most interesting outcomes of the project was in how the wall allowed for new forms of interactivity and movements around the Moodwall to emerge. As the Moodwall installation did not react to movement towards the front of the screen but only to sideway movement, one of his audience told him that he needed to move around quickly parallel to the wall to make it react. As a curious note, he also added that the wall was used as a background to shoot several hip-hop videos that several peripheral activities like blogging (about the wall) helped in spreading the news and foster a positive sense of community around the Bijlmer area.

Oostrik’s future projects also involve movements of the human body creating visuals on the screen, ideas of initiating an interaction and confronting people with themselves and their narcissism as the starting point of a dialog. 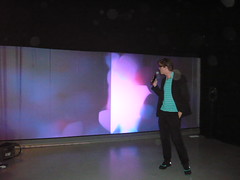 For more information on the Moodwall and other projects, click here

To watch some videoes and photos of the Moodwall/Motionwall in practice, click here