Michelle Teran (CA) performs, exhibits and lectures in topics ranging from collaborative art, street projections and urban intervention, exploring and illuming the inherent tension between the public and the private. In the two works that she presented at Test_Lab, she aims to brings into attention to the effects of situational permission on the idea of implied security and stability.

The first work, Projects for a city. Girona (2008) was inspired by the Georges Perec’s vision of facade-less Parisian apartment, whose interiors are made visible. The work itself was an actual performance where various interior spaces were projected on the buildings along River Onyar, Girona through the span of a few hours on one night. The first segment was a selection of videos made by the artists and residents of Girona, while the second segment was the projection of live video from inside the kitchen of a restaurant on to the street. As the people in the kitchen directed the attention of the viewers to the most happening parts of the kitchen, Teran described that in this way, they became the producers, directors and performers of their action.

The second project, the Black Leather Projection Purse (2006) is a street performance object. The modified ladies purse with handheld projector is connected to a battery that allows one to walk through the city, intercept its live surveillance and project on its architectural surfaces. The projected video, which greatly resembled a peephole view, gave it a voyeuristic touch.

Following the presentation of her works, Teran brought up some topics for discussion, mainly the notion of the cityscape as a skin; a site for the projection and intervention by artists. She also put forth questions on situational permission and privacy, and the course of action before and after one’s absence of privacy is revealed. 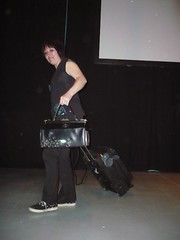 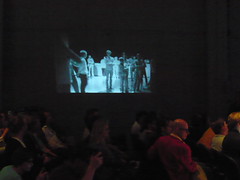 Link to Teran’s webpage with more information on her works, click here