Rui Guerra (PT) first presented his project called “Beam It“. The project consisted of a screen beamed on public space (in this case, in V2) that could be modified by online users by means of text messages, photos or videos. Basically people could visit the website, watch the area where the screen was located as well as the screen itself, and interact with it by means of typing things that would then appear on the screen.

After that, Guerra presented IXTK, whose goal is to do some research and experiments in the fields of art, technology and society.Meanwhile, beam it was still running on the background, which made it difficult to concentrate on either his speech or the streaming. Nevertheless, both were very entertaining.Their first project consisted of the a sentence written on a big cardboard: Would you be shocked if I put on something more comfortable? With this in hand, Rui and his group would walk around in bars or private spaces and wait to be approached by someone, as they should not talk to people directly for this project. If someone came and talked to them, they would point the person to a website called “would you be shocked if I put on something more comfortable . com”. There, the person would end up receiving an invitation to a private party. Their second project was called “beam me up, scotty“. It involved a mobile battery support, a laptop and a beamer. They would beam images on the surface of buildings. However, they were not beaming their own content. Instead, they had an interface where anyone who was in the street could make drawings on the buildings. Later, they started beaming inside of bars, projecting sentences above people, about what they were possibly saying. 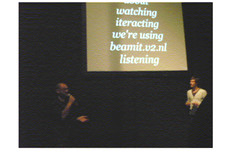 Check the short video called “my place or your place” at their website as well as their other
original and well humored pieces!