Toine Horvers (NL) and Paul Cox (NL) have been working together at a project called Beijerkoppen, which is still being developed and improved. The project has already had its debut on a wall of the new Media-markt at Beijerlandselaan, Rotterdam. The main aspect of this work is the multiculturalism represented by three simultaneous portraits of newsreaders from all over the world in near real-time. The fact that most TV newsreaders look straight into the camera while speaking a message makes this work interesting 24 hour live talking portraits. With the use of small loudspeakers, the passer-bys, when close to the portrait, can also hear the different languages that are being spoken at each screen/portrait. 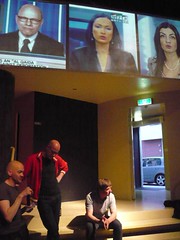 For this project V2 developed a search system that continuously scanns as many online TV stations as possible. However, the software still makes mistakes, which is why they are still working on it. The software should recognize only human faces, but sometimes something similar to a face is falsely recognized. A special software has also been developed in order to determine the right crop, size and composition of the picture before it appears on one of the displays. When asked about leaving the mistakes, as they could make the work more interesting, Horvers responded that he would not mind it being perfect, as it should “just be there” and “be what it is”.

Even though the work is supposed to be set in public space, it worked very well at the V2 lounge. However, the connection between “old city” and “modern portraits” cannot be made under this situation.