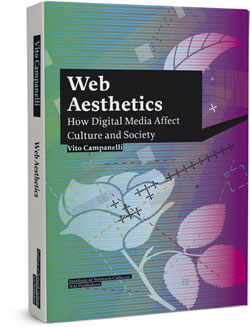 Web Aesthetics
We live in a world of rapidly evolving digital networks, but within the domain of media theory, which studies the influence of these cultural forms, the implications of aesthetical philosophy have been sorely neglected. Vito Campanelli explores network forms through the prism of aesthetics and thus presents an open invitation to transcend the inherent limitations of the current debate about digital culture.

The Web is the medium that stands between the new media and society and, more than any other, is stimulating the worldwide dissemination of ideas and behaviour, framing aesthetic forms and moulding contemporary culture and society.

Campanelli observes a few important phenomena of today, such as social networks, peer-to-peer networks and ‘remix culture’, and reduces them to their historical premises, thus laying the foundations for an organic aesthetic theory of digital media.

Vito Campanelli is a media theorist and lectures on the theory and technology of mass communication at the University of Naples – L’Orientale. His essays about media art are regularly published in international periodicals such as Neural. He works as a freelance curator and as a promoter of events in the domain of digital culture. He was also co-founder of the non-profit organization MAO – Media & Arts Office.