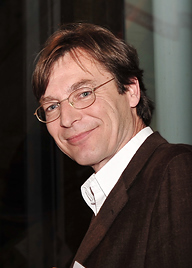 Eelco Ferwerda, the president of the recently established Association of European University Presses, has been involved in electronic publishing since 1995. Ferwerda is also the Project Manager of OAPEN and leads the work on its Open Access Publication model. He received the Dutch SURFshare Open Access award in recognition of his work for OAPEN.

Ferwerda spoke about scientific publishing and open access in an effort to demonstrate that open access improves the sustainability of academic publishing. He opened his presentation by discussing – from a macroeconomic perspective – the scholarly communication system’s current state, illustrated by a graph of research library expenditures in the United States between 1986 and 2005. It seems that, in spite of digitization, the costs of serials had been going up continuously, at a rate four times higher than that of inflation. Libraries were straining to expand their acquisition budgets in order to match the constantly growing expenditure on serials. The main reason for these financial struggles is that traditional academic publishing is losing sustainability as scientific journals are commercialized instead of becoming more open.

Scholarly communication is, according to Ferwerda, a wheel moving forward, which begins its spin with researchers, with authors writing down their work, which is later reviewed, then published, thus leading to an interaction between publishers and agents, who negotiate with libraries that inform researchers. Funders support this massive process. An example of such funding for the Netherlands suggests that research costs 1 billion euro, with authors being paid 920 million and reviewers earning 242 million while the publishers get 18% of this total sum, namely 210 million.

Since traditional academic publishing is dependent on public spending, the research funders and universities and universities pay research authoring and reviewing, while libraries cover subscription costs. Open access would benefit all actors in the turning wheel: researchers gain direct access to material, which improves the discovery of useful information , authors get a worldwide audience, increasing their visibility and impact, funders improve their ROI (return on investments) ensuring publication and advancing the spread of knowledge, publishers create an open space for the effective dissemination of knowledge and libraries offer better services and answer user needs. In this win-win scenario, worldwide open access would bring the Netherlands 130 million. If only the Netherlands would adopt the system, then it would still make the not-so-shabby sum of 37 million.

While traditional monographs are also suffering from decreasing relevance and sustainability as between 1980 and 2000, sales to North American libraries, for example, dropped on average from 2000 to under 300. On the other hand, open access journals are becoming mainstream; the Directory of Open Access Journals is currently the host of 2433 such journals. The journal trend is slowly creeping into the world of monographs, as several publishing houses, like Bloomsbury Academic and the National Academies Press, are putting out open books. Most such editions consist a version that is freely available online and a sold printed one.

The Open Access Publishing in European Networks project (OAPEN), coordinated by the Amsterdam University Press and launched at this year’s Frankfurt Book Fair, is based on the abovementioned hybrid model of online and print. In this model, publishers can charge a publication fee for the open access edition, but authors retain copyright of their work under a recommended CC license. Books benefit from long-term availability online, which is made possible by using the University of Amsterdam’s repository infrastructures and the e-Depot of the Dutch National Library. The research funders – universities, for instance – should cover the publishing fees. As for the main goal of OAPEN, the project strives to ensure publication of peer-reviewed research results, the effective dissemination of and unrestricted access to research findings, all of which advance the spread of knowledge. Publishers can sell other editions – such as printed ones, but a crucial aspect is sharing the sale revenues with research funders.

To make the transition from traditional publishing to open access, Ferwerda advised on following a few principles, namely that research funding should include the cost of dissemination and that the policies of funders should be extended to include open access publishing. The problem encountered by OAPEN is a double-edged sword: without funding, there are no open access books, without publishers willing to embark on the transition journey, there is no funding.

Sometimes skeptics need a bit of push, so OAPEN Is proposing pilot projects to convince all parties with a stake in academic publishing of the benefits brought by open access. The first two projects of this kind are currently taking place in the Netherlands, with the support of NWO (The Netherlands Organisation for Scientific Research) and the United Kingdom, where JISC Collections are backing up OAPEN’s ultimate goal of establishing a European framework for open access books. They’re off to a solid start judging by the 700+ books they already have online.