In the “open content, tools and technology” panel, right after Ben Moskowitz and Michael Dale, it came the turn for Peter Kaufman to talk about appreciating audiovisual value, and do his bit to “achieve some positive social change within our lifetimes”, as he saw the ultimate goal of the Economies of the Commons conference was. 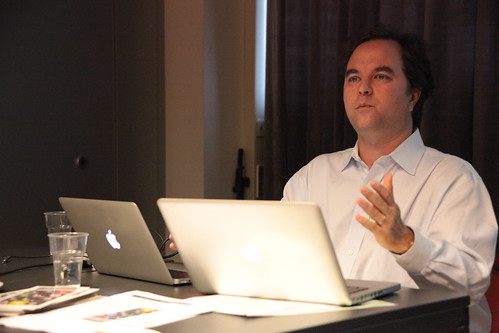 The path to follow to achieve that social improvement, and the challenges we face are, in his own words, “to make more good audiovisual material and tools more freely available for everyone”, making it possible for everybody to speak in the language of video.

He continued to remind the audience that “Wikipedia is the largest public educational commons” (at least until the Smithsonian gigantic project finally takes off), as a starting point to bring an important point on the table: how the commons, the public domain and the market are wrongfully pitted against each other and how we stand to lose a lot if we isolate ourselves from business, from those building the infrastructure of the web. The counterpoint he proposes is a commitment from education, culture, justice…to not stand in isolated, but seek collective arrangements for true openness.

Luckily, he didn’t stay in the shoulds and general ideas, but he dared giving five bullet points to consider in order to make them real:

1. Content needs to be more smart and self-aware. After all, we are in a scenario where all video material is archival material and online video will be, no doubt about it a big part of the future of our video.
So in order to make this content easy to share, reuse, remix across borders and languages, and so that it can break the ultimate barrier: making it readable not only by people, but also by machines, we have to make it also smart and self aware.

Machines will be reading, sorting, ranking…the video, and “if we spend attention in machine readability the assets discussed will become apropiately hyper valuable”.
The good news at this point is that the big companies that control the market seem to be aware of it and seems like “intelligent” or “smart” are words we are going to see more and more in TV devices: you only need to have a look at the new products flooding all the gadget blogs and stores like GoogleTV (“Your TV just got smarter”), Intel’s Smart TV, Youview (BBC’s project Canvas), Samsung Smart TVs…

2. Search: Google & Google Images can search images by liscence type (so does flickr) and Wikimedia can suck in images from flickr liscenced with creative commons.
In order to achieve true openness and generate a good and complete educational open platform, video needs the same: searchability from google and aceessibility from wikipedia, and by video, I mean of course, open video.

3. Peter’s third point is really interesting. He introduced how the Pandora project in America succeeds with its model of a very powerful recommendation engine based on the “music genome”, that classifies each song with around 400 parameters/characteristics. He suggested creating a workgroup to start a similar system that can work with video.

4. Number for is (and had to be) money, as, afterall, the conference was about money. Today in the world, money from government funds, fundraisers, the Mozilla Foundation, philanthropy and many other sources is injected into de development and expansion of open video tools, standards, promotion and distribution…but it’s still too small compared to the huge budgets of mainstream media and Hollywood. We are in a critical moment where, if the open video community is unable to incentivise the corporate world to get involved in open video, we will fall short in the attempt to build an open web.

5. In relation with that, we have to consider something that might give us the key to that connection with the corporate world: the web is a commercial universe, filled with ads in every corner of our browser, and that doesn’t change because the video is open. The only problem is that all that revenue, produced out of our time and information, doesn’t go to our bank accounts, or to the content creator’s, but to Google.
But is there a way to take control over this market, that is, as Kaufman said, built over our stuff without us?
The answer, guessing there is one, is maybe, but for that, we have to start appreciating the ecosystem of value that our material represents and we have to be more aware about what rights we want to give away before we go broke giving our culture away for free.

Peter B.Kaufman is the president and founder of Intelligent Television.
You can listen to the whole talk here.Part1Part2