Last, but surely not least in the session of “Critique of the Free and Open” is Simona Levi, multidisciplinary artist, director of Conservas and arts festival INn MOTION. She is also co-founder of EXGAE and organiser of the Free Culture Forum Barcelona. 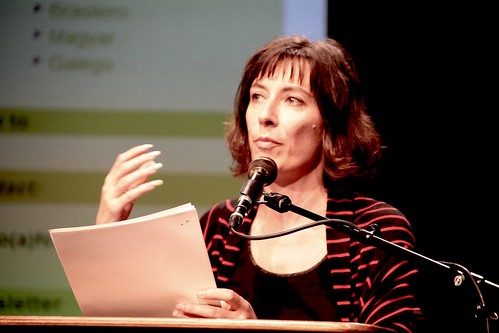 Earlier, professor Yann Moulier-Boutang, Nate Tkacz and Dymitri Kleiner talked about the (Creative) commons, the capitalist industry behind it and the public domain in trying to define ‘free and open’. Simona agrees with that ‘the open and free’ have to be discussed, but she also, being a profound activist, stresses that we have to fight for our civil right in a digital era.

Propaganda and fear
We must not forget that in the meantime laws are being changed that will limit sharing. Laws that are against piracy. The propaganda that is accompanying these laws install upon us a fear of not being free, while at the same time taking our freedom to create, share and innovate away from us. We shouldn’t therefor be surprised to see the (ab)use of the word freedom by the Tea Party (in an earlier presentation by Nate Tkacz) or by Berlusconi and his ‘People of Liberty’-party.

One of the main arguments of the capitalist industry is that free means free in the sense that no money will be earned by the artist. “Artists will starve and everything will become a mess.” However, Simona explains that this is simply not true. Free doesn’t mean that you don’t have to pay the value of the thing. During the INn MOTION festival, for example, every artist was paid.

The new role of the artist
The discussion isn’t really about money, it’s about cultural consumption. We shouldn’t discuss what we can do to feed the artist, but how the artists can capture the core of the problem and attribute to the revolution. Artist will have to go back to their roots and away from the multinational. They have to understand that they are the base of “cleaning the consciousness”. They should fulfill their duty in transforming the brain and reclaim this privilege that is taken over by propaganda. “That’s why artists are there. If not, fuck the artist”.

“We can not fuck around with the free and open”
Defending the Internet from the hands of those that are trying to limit our liberty is an urgent issue, and action needs to be taken to define our own definition of free and open. Sharing in this sense is very important. It lies at the base of all innovation, creation and education. How else can we build a common imaginary that will lead us to victory? We ourselves have to force the government, Microsoft and others to enable us to share, create and truly be free.

Simona wraps up with the words “Power is always using the name of freedom to do the nasty thing.” Toghether we can change this if we’re prepared to fight.

Take a look at the various projects Simona Levi is involved with to see the practical and critical side of fighting for freedom and openness:
– FC Forum’s Charter: For innovation, creativity and access to knowledge. Also citizen’s and artist’s rights in the digital era are discussed.
– EXGAE organizes the biggest Free/Libre culture event ever that is against the commercialisation of culture: OXCARS.
– Simona speech at the Forum for Creative Europe.