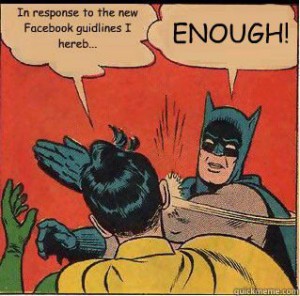 Facebook continues to anger its users. Last week timelines flooded with people claiming their copyright over their profile with a single status update – as if they never agreed to Facebook policy. (Half a day later the other half of the timeline flooded with Batman cartoons punching the silly copyright-believers in the face. Both were probably equally annoying in their uniformity of response.)

About a month ago Dangerous Minds already claimed in a very good read: Facebook I Want My Friends Back!

On the other hand, are we overestimating Facebook’s and Twitter’s importance? Dark Social: We Have the Whole History of the Web Wrong. Alexis Madrigal claims most sharing is done via dark social means like email, not ‘social media’.

The Berliner Gazette held the conference Digital Backyards and put a lot of documentation online as a result: What are (European) alternatives to Google and Facebook?

Mark Cuban on the Huffingpost Post: What I Really Think About Facebook. ‘At the core of the issues I have with Facebook is how it thinks about itself.’

Fears for civil liberties as Apple patents technology that could remotely disable protesters’ smartphones. ‘Civil liberties campaigners fear it could be misused by the authorities to silence ‘awkward citizens’.’

Could it be imaginable, let alone a reality? And apart from completion, does Wikipedia show the quality we desire? Surmounting the Insurmountable: Wikipedia Is Nearing Completion, in a Sense

Wikipedia vs. Bitcoin: The Full Faith and Credit of Wikipedia

Check out the blog Culture Digitally, with for example a post on The Materiality of Algorithms and The Relevance of Algorithms

Media and expression: theses in tweetform. Nicholas Carr expresses his views in 20 tweets

‘Computers are getting invisible. They shrink and hide. They lurk under
the skin and dissolve in the cloud.’ Read the essay Invisible and Very Busy by Olia Lialina about users here.

Another long read, already old in the online age, but still woth mentioning: Inside the Mansion – and Mind – of Kim Dotcom, the Most Wanted Man on the Net