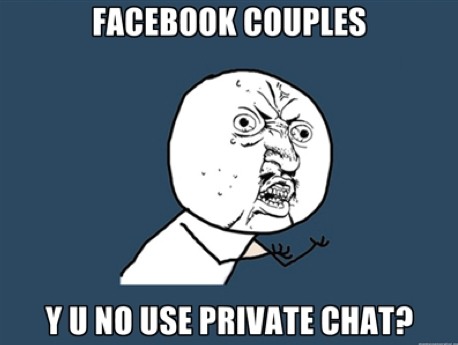 Y U No Guy has been bestowed with ‘God Tier’ status on Memegenerator.net for articulating some of society’s most pressing questions. In this instance, he inquires as to why Facebook couples seem intent on projecting their relationships throughout Mark Zuckerberg’s empire rather than keeping them private – a curious trend that shows no sign of abating. One response to this pensive query might be that users are simply embracing the newfound representative potential afforded by social network sites. Unlike mass media, which have traditionally thrust romantic representations upon the relatively passive consumer, social media actively encourage the ‘prosumer’ to depict his or her own intimate ties. As such, offline romance is increasingly taking form inside the blue boundaries of Facebook, with updates, tags, posts and likes all serving to publicise private affinities. Perhaps the site is being used as a tool of rebellion against the idealised intimacy that has been driven down our throats for so long. Then again, perhaps we are in fact so besotted with the historical narrative of romance that we want to boast it as inextricably woven within the fabric of our own lives. As always, Y U No Guy’s question is as complex as it is crucial. But this does not mean it is unanswerable, and British pop music may provide a surprisingly good starting point for unravelling the mystery.

In the year 2000, previously obscure London quartet Coldplay achieved instant international stardom courtesy of their hit single ‘Yellow’. A melancholy ode to vocalist Chris Martin’s unrequited love, the song stormed top forty charts the world over as it tugged at our collective heartstrings. But not all bestowed praise upon this overnight sensation. In Sex, Drugs, and Cocoa Puffs: A Low Culture Manifesto, Chuck Klosterman playfully bemoans the very existence of the band and their iconic tune, taking particular aim at the somewhat mawkish flavour of Martin’s lugubrious lyrics:

‘For you I bleed myself dry,’ sang their blockhead vocalist, brilliantly informing us that the stars in the sky are, in fact, yellow. How am I going to compete with that shit? That sleepy- eyed bozo isn’t even making sense. He’s just pouring fabricated emotions over four gloomy guitar chords, and it ends up sounding like love.

In the eyes of Klosterman, melodramatic artists of the Coldplay ilk delude us into believing that ‘fake love’ should be a part of ordinary living. We measure our actual relationships against this fictional benchmark and, unsurprisingly, find they come up short every time.

Despite writing with his tongue firmly planted in his cheek, Klosterman’s take on Coldplay is emblematic of a broader societal concern. For decades, academics, philosophers, psychologists and the like have observed an intricate and potentially harmful interplay between mass media and romance, whereby we are perpetually subjected to idealistic representations of how being in love is supposed to feel. In seeking to attain the unattainable, we place undue pressure on our relationships and thus preclude the possibility of falling in love with any acumen of normalcy. There can be no ‘normal’ if everybody is twisted by the same forces simultaneously.

Of course, such twisting forces can be found well beyond the confines of the music industry. Contemporary culture is in fact saturated with what might be called the ‘myth’ of romance, an elaborate illusion fraught with danger. Take popular Western cinema, for example, which testifies to both the historic and present-day pervasion of fantastical relationships. Writing on the politics of Hollywood romance, Robert Lapsley and Michael Westlake (1992) contend that the thematically dominant strain of American narrative cinema is not only that the sexes are complimentary but that such harmony is figured nowhere more perfectly than in romantic love.

For the most part, the romance in question lives happily ever after. All barriers to intimacy are eventually overcome and the newly united couple can finally lock lips just before the end credits roll and the curtains close. They did it. They found true love. Of course, such predictably saccharine sentiment is partly derivative of an underlying social desire for perfect romance and the promise of happiness it entails. But by resolving romantic tension in the ephemeral realms of music and cinema, mass media only serves to perpetuate romantic insecurity in the unpredictable drama that is life. As Tania Modelski explains, illusions of romance “inevitably increase the reader’s own psychic conflicts … [just as] certain tranquilizers taken to reduce anxiety are, though temporarily helpful, ultimately anxiety producing” (1982: 57).

But if traditional forms of media are bombarding us with fake love, do social media finally afford an opportunity to represent the real? There is little doubt that such platforms have radically transfigured the one-to-many paradigm once central to transmissive technology, giving rise to a new breed of communicative possibilities. Present-day prosumers are granted unprecedented freedom in broadcasting fragments of their own lives, sharing everything from the frivolous to the fundamental with an audience of hundreds, if not thousands. The same can be said of the virtual ‘us’: the romantic relationships we cast online. No longer limited to mass media outlets, representations of romance are now projected by the ‘many’, perennially pervading our streams and feeds. This is no more evident than in the case of Facebook, where the emblem of the relationship status is increasingly serving to substantiate offline intimacies.

So what to make of those little pink hearts that populate our profiles? If he gatekeepers and architects of Facebook indeed wield great social and organizational power, it is important we adopt a critical lens to examine the ways in which the platform can meditate our relationships. To this end, the central question of this paper can be formulated as follows: In what ways and to what extent is romance represented on Facebook?

Within the highly immersive realm of social media, questions of representation are closely connected to notions of ‘real’ and ‘virtual’. As such, this paper will first outline the ongoing convergence of online and offline identity, which ostensibly lends a false sense of ‘realness’ to Facebook romance. The variety of ways in which Facebook’s interface facilitates romantic conception will then be addressed, focussing specifically on the simplification, definition and validation of the relationship. Finally, the tendency for users to curate an ‘ideal us’ within the constraints of the system will be considered, before a critical conclusion is drawn.

Andrew Erlanger worked as a research intern for the Unlike Us program at INC. Download his final essay The Curated Couple: Romantic Representation on Facebook as PDF.