Read online, download the PDF or order a print copy at Lulu! 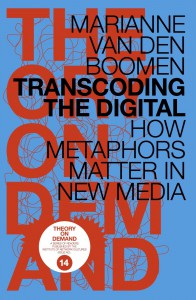 Transcoding the Digital: How Metaphors Matter in New Media by Marianne van den Boomen is a material-semiotic inquiry into the constitutive role of metaphors in our daily encounters with computers and networks. While interface concepts such as desktop and windows are easily recognized as metaphors, this research shows how in fact all digital sign-tool-objects – ranging from icons and email to Facebook friends, from hyperlink and tweet to Pirate Bay – are digital-material metaphors. They frame and organize how we access the black boxes of software and machinery, which in turn organize and reconfigure society. The same holds for discourse metaphors such as virtual community, cyberspace, Web 2.0, and social network. Metaphors matter in digital praxis, literally. This study makes an intervention into the contemporary theory of metaphor by extending it with the notion of material metaphor, including a manifest for hacking digital-material metaphors.

Marianne van den Boomen studied psychology in Utrecht and political sciences in Amsterdam. For twenty years she has worked as editor, journalist, and web designer; from 1990 to 2000 mainly for the weekly opinion magazine De Groene Amsterdammer. She was involved in the development of the early Dutch Digital City (1994), and published several articles and books on internet culture including Internet ABC voor vrouwen (1995) and Leven op het Net: De sociale betekenis van virtuele gemeenschappen (2000). Since 2003 she works as a lecturer-researcher at the Department of Media and Culture Studies (Utrecht University), where she teaches BA and MA courses in the program New Media and Digital Culture.