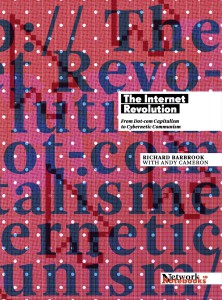 A conversation between Richard Barbrook and Petar Jandrić

Richard Barbrook is a media theorist, social scientist, and one of the most important analysts of the political and the ideological roles of information and communications technologies. He studied at universities of Cambridge, Essex and Kent. In early-1980s, he helped to set up the multi-lingual Spectrum Radio station in London, and published extensively on radio issues. In 2015 the INC published the 20th anniversary edition of The Internet Revolution, containing the iconic essay ‘The Californian Ideology’.

Richard has spent his entire academic career at the University of Westminster in both its Media and Politics departments. In 2007, with Fabian Tompsett and Ilze Black, he cofounded a Situationist art group Class Wargames (2015). Based in London, the group has restaged Guy Debord’s The Game of War (Becker-Ho and Debord, 2009) in various places throughout Europe, Russia and Brazil. He is now working with Cybersalon on the British campaign for the People’s Charter of Digital Liberties.

Richard wrote numerous highly influential articles such as ‘The Californian Ideology’ (Barbrook and Cameron, 1995) and ‘Cyber-Communism: how the Americans are superseding capitalism in cyberspace’ (Barbrook, 2000). He also wrote three important books: Media Freedom: the contradictions of communication in the age of modernity (Barbrook, 1995), Imaginary Futures: from thinking machines to the global village (Barbrook, 2007), and Class Wargames: ludic subversion against spectacular capitalism (Barbrook, 2014). Richard is a trustee of Cybersalon, an online think tank on digital futures, and a member of the Labour party. His Imaginary Futures book received the Media Ecology Association’s Marshall McLuhan prize in 2008.

In this article, Richard Barbrook discusses his ideas with Petar Jandrić who is an educator, researcher and activist. He has written three books, dozens of scholarly articles and chapters, and numerous journalistic articles. Petar’s works have been published in Croatian, English, Serbian, Spanish and Ukrainian. He regularly participates in national and international educational projects and policy initiatives. Petar’s background is in physics, education and information science, and his research interests are situated at the postdisciplinary intersections between technologies, pedagogies and the wider society. Petar has worked at Croatian Academic and Research Network, the University of Edinburgh, Glasgow School of Art, and the University of East London. At present, he works as professor and director of BSc (Informatics) programme at the Zagreb University of Applied Sciences, and visiting associate professor at the University of Zagreb.

Please find a pdf with the full conversation here.