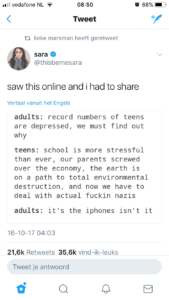 The discussion on digital detox has been going on for some time now, also in the Netherlands, and is doesn’t look like it’s going away soon. After talking about the shortcomings in the detox-discourse, Geert asked me to write down my thoughts on the issue. Below is the result.

The phenomenon of digital detox is annoying. Obviously, it fights only the symptoms and not what lies behind them, the causes of perpetual distraction, loss of concentration, burn-outs and so on. It’s the easy way out, but in my view it’s a way out that turns out to be a dead-end. There are a couple of reasons why.

When it comes to the physical incentives to go detoxing, going out into the woods without a phone to get relieved of stress and fatigue will not help you in the long run: it’s time off that serves only to get right back in the rat-race when the camp-out is over. It’s like the carrot in front of the donkey’s nose: something to keep you going, supposedly out of free will, while it’s actually a function of what the Korean-German philosopher Byung-Chul Han calls psychopolitics, the next step after Foucault’s biopolitics. It means the psyche is in itself subjected to control mechanisms, which according to Han follows neo-liberal rules. The push towards self-discipline, of which digital detoxing is an example, is one of many strategies of the market to enter the psyche in order to increase efficiency, productivity, and profit. Distraction is the first step in this process. Once distraction has grown so disproportionately that we start to protest against it, detoxing and other disciplinary strategies are proposed as a second step, all the while helping corporations make more money.

So, just logging off for a couple of days won’t cut the crap. Does it mean that we should not do a detox but completely cut out the smartphone and all the invasive media from our lives? Surely, that is not what we want either. At least, I’m not willing to give up on the internet, on being connected. Apart from the negative ‘symptoms’ it also – and still – offers a lot of benefits. Pleasure, friendship, courtship, knowledge, work.

To me it’s clear that we need a new way of coping with this, one that befits the ‘post-digital’ age. One that acknowledges that this internet thing is not going away, and we don’t really want it to either. One that acknowledges that doing, knowing, enjoying and discovering many different things might actually also have a good side, even if it’s relatively superficial compared to the specialised knowledge that former (elite) generations strove for. Just like the access to so many different things and people and publishing possibilities that the internet gives, and the fact that so many more people are able to participate in debates, to make themselves heard etc. – even though it leads down some ugly alleys as well. I want a strategy that doesn’t just turn away from this or turn inwards into meditation or mindfulness, but confronts the post-digital condition, sucks it in, wallows around in it, and still thrives.

One such strategy could be to actively follow your own distraction instead of just being pursued by things distracting you. It begs the question: What in the world calls my attention? What, not in the sense that we let ourselves get distracted by whatever’s meant to distract us (although of course we must also understand the mechanisms behind that), but listening to the call that actually pleases our ear, like the call of a siren. Put stress on the ‘my’ in ‘my attention’ and not just let yourself get hooked by anything that’s fishing for any attention of anyone. Think about what attention is. Attention is contradictory: it’s what media companies seek and by seeking it, they destroy it. Attention is pulled in by them, instead of pulled out by us. What is it in the world that calls out my attention? I don’t care if it’s online or offline, the two are hardly distinguishable. I care if I care and I care about many things.

(Some of these notes are worked out more elaborately in the title essay of my (Dutch) book Swimming in the Ocean: Texts from a Post-digital World)

(This posting was edited to add the part about psychopolitics according to Han.)

Raw Memory, Ephemerality of the Eternal in WhatsApp by Natalia Stanusch

Hauntology of Metadata WhatsApp presents itself to us as a service that belongs to us. The sent images, the videos, the messages are encrypted for my privacy because they belong to me. But a single glitch can reveal the WhatsApp’s gaze lingering behind its interface. Instead of seeing WhatsApp, I can see WhatsApp-me, a single [...]

Update 2: On Saturday November 27, 2021 the Amsterdam riot police used violence to evict the Hotel Motel squat, after peaceful demonstration outside and a protest manifestation on Leidseplein the evening before. Politically responsible for this is the Green-Left local government and its major Halsema, who signed off on the eviction. Update 1: Excellent review [...]

Illustrators, designers and other creatives gathered in a skatepark in Breda last month to learn from each other and discuss the realities of working in precarious conditions where disciplines merge, creativity flows, and we all negotiate ways to stay afloat – financially and emotionally. What came out of the two-day event? Gathering energy The spacious [...]