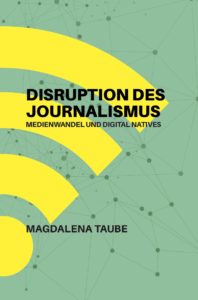 Today, public interest in journalism seems greater than ever. Buzzwords such as ‘fake news’ or ‘click bait’ indicate that we are dealing with a polarising political issue. Anyone who dares to investigate journalism in this intensified situation also wants to better understand the world in which we are living. After all, journalists play a decisive role in this scenario because they have a strong influence on how we perceive the world. How has their role changed since the advent of the internet? What does it mean that there is both a new generation of readers and a new generation of journalists called digital natives who were born in the 1980s and raised on the Internet in the 1990s? Searching for answers, the book paints a multi-layered portrait of the Internet generation. It above all shows one thing: though the far-reaching transformation of media set in motion by digitalization often appears like an uncontrollable force of nature, we can actively shape this process even in our everyday journalistic work.

Author
Magdalena Taube is editor-in-chief of the internet newspaper Berliner Gazette, assistant professor of Digital Journalism at the University of Applied Sciences Hanover and lecturer at the Leuphana University, Bard College and the Humboldt University. She is co-editor of numerous anthologies, most recently ‘A Field Guide to the Snowden Files’ (2017).