I went to Radical Networks in Berlin (19-21 October 2018). It was a very inspiring experience and I took notes feverishly for 3 days. The program was diverse and inclusive, in-depth but accessible to non-techies. I worked out the notes of the talks that I found especially interesting a bit further and added references below.

In the introduction to their workshop, Saraswathi and Sarah pinpoint an issue that is central in thinking about new economic systems:

“All of the networks we hope to build sit atop or are funded within a financial system that was designed neither for us, nor by us.”

How can we start to think outside of what we know, what gets funded, or what we take for granted? Oftentimes when I take part in a discussion about future, fairer economies, it’s relatively easy to agree on some shared values in a small group, but when that has to be transformed into a larger ecosystem, diversity either gets squashed or capitalist logics creep back in. To open up new ways of thinking about currency and economic systems, we were presented with a series of ‘what ifs’ and examples of those imaginaries actually existing:

What if it was impossible to hoard money

For example: The Miracle of Worgl. During the Great Depression in the 30s, the town of Worgl in Austria introduced banknotes that had to get an official stamp every month denoting that the owner payed their taxes for owning the banknote. In effect, this meant that banknotes would decrease in value the longer you store them, dis-incentivizing what is known in the cryptocurrency world as hodling. 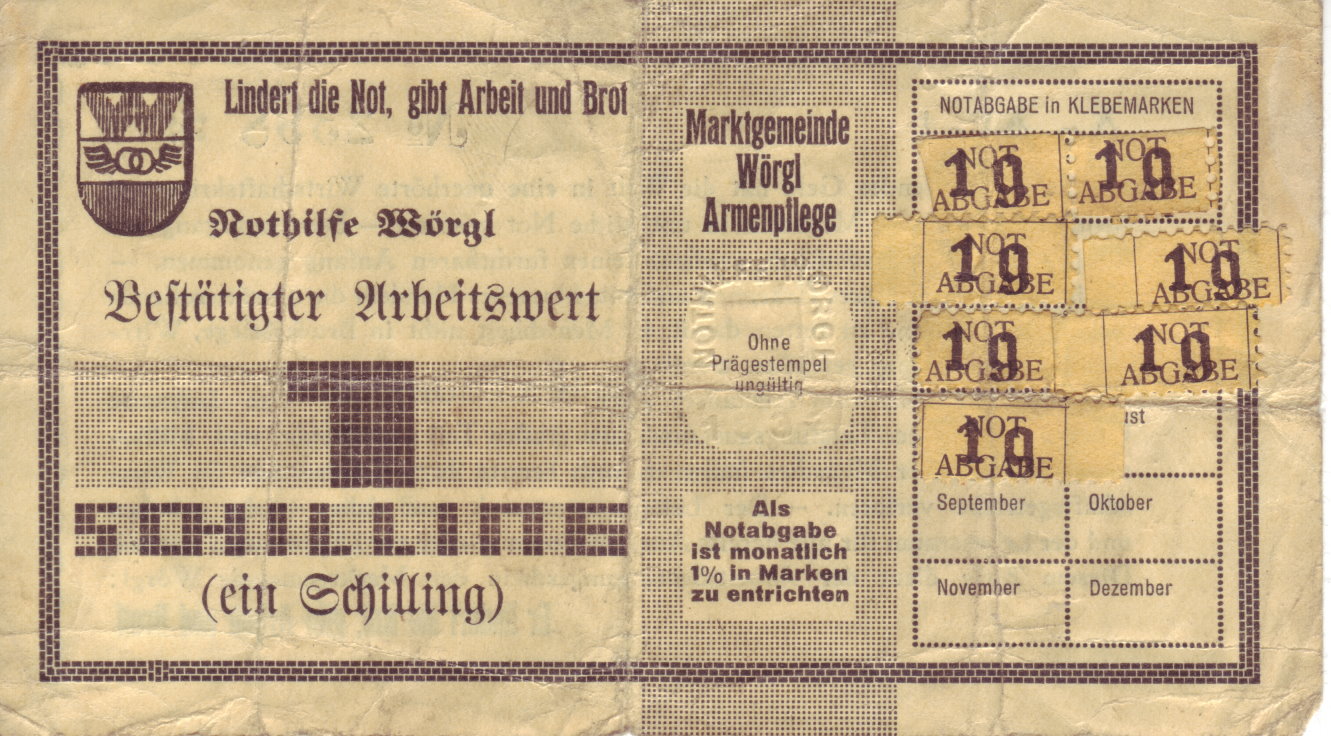 What if care work were valued?

For example: Fureai Kippu, Japanese systems for making care work transferable and storable. These systems rewards care for the elderly with a complementary currency. You might exchange this currency to pay for care of your own parents (for example if you live in a different city than they do), or story the currency to pay for your own care needs later on in life.

What if sustainability were rewarded?

For example: Regen Network, which is a blockchain-based system that aims to “create a systemic multi-stakeholder, market-driven solution to facilitate verifiable ecological outcomes.” (Regen Network whitepaper) Although this example doesn’t break with basic market logics and profit drive, it does try to establish a more holistic understanding of industry and value, tying varified ecological impact to end products.

What if currency was an oral history?

For example: Rai stones, a currency system on the Micronesian island of Yap that had its hayday between 1000 and 1400 AD. Giant stones were used to represent value, and ownership needed to be recorded in oral history, meaning that stealing the physical stone didn’t mean stealing its value, it would still be known who the owner was. This went so far that stones lost in the ocean could still be used, because their stories would not be lost. In fact, stones that were hard to make, or had a lot of history to them were worth more. 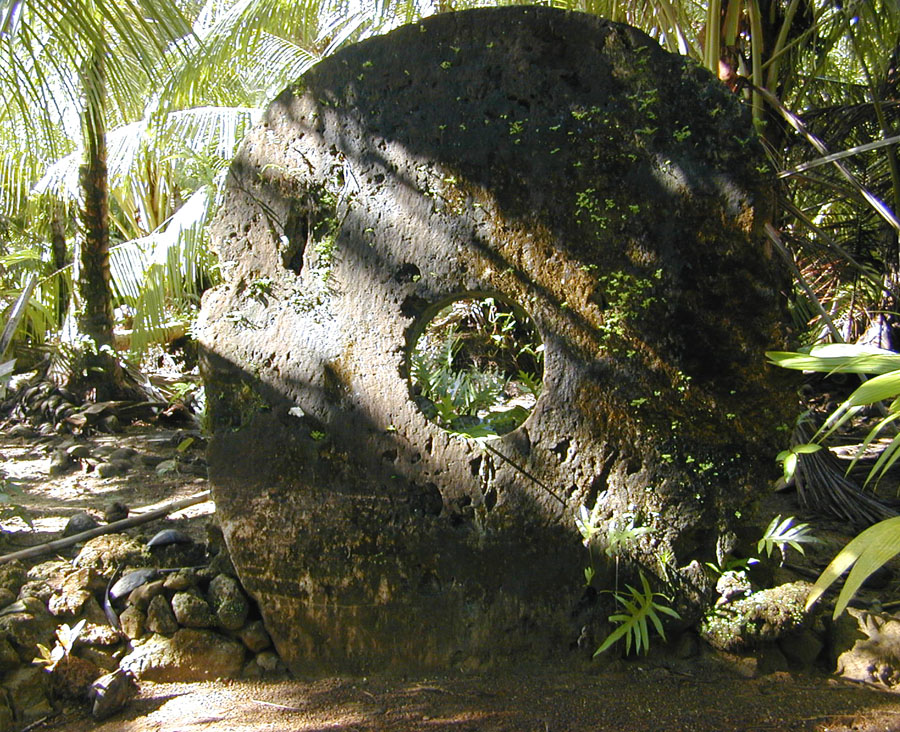 What if currency were equally distributed?

For example: Circles, a project that Saraswathi and Sarah are involved in through their work at ConsenSys. It is a blockchain-based system that distributes a basic income and incentivizes cooperation and spending within the network in order to make a global and equally distributed economic system.

After these examples, we split up into groups to discuss our own imaginary future societies and their currencies (my group imagined a network of alien squids that used information about food and danger as a currency 🐙💾).

Common themes among the groups were

Talking to one of the groups afterwards, I learned that they had defined their core values before doing anything else, which led to a well thought-out system.

Clusterduck is an interdisciplinary filmmaking, design, research collective that investigates internet content, its creators and the platforms its spread on.

This year the idea that the alt right got connected through the means of memes gained traction. Soon after, responses to this idea critiqued the way it took responsibility away from the left. Clusterduck wants to investigate what the actual influence of the memes is, and advocate for new methods to do this research.

A lot of the data that alt-right memes research is based on, comes from Reddit and Twitter, because their APIs allow for the most thorough extraction. Only a subsection of alt-right people are based on these platforms though, and it is important to look at places like Facebook and YouTube as well.

Although Facebook gave scholars access to petabytes of data on misinformation after the Cambridge Analytica scandal, this data is only accessible to institutionalized academics. Experimental forms of research like Clusterduck is doing are excluded from investigating it. This limits the types of knowledge that can be created.

In their research, Clusterduck adds several databases together (e.g. data from Know Your Meme, 4chan, Twitter, Reddit, and Gab, the ‘alt-rights answer to being censored on Twitter’) to create a wider body of resources. Their algorithm clusters the images and annotates them with information about where they first appeared for instance to allow for further analysis.

While it is interesting to research these memes, they are floating signifiers: they constantly change in meaning and connotation. Memes are appropriated by the left and the right, and defy definite meaning, so classifying them as for example hatespeech is very difficult to do.

In her talk, Sarah Friend (of ConsenSys) problematized the decentralization movement. Decentralization has become a hyped word, used without actually thinking about what it means and which phenomena might benefit from not being decentralized.

While the web is often perceived as having started as a very decentralized system that has been centralized during the past decade through platformization, the original Arpanet was actually quite centralized: accessible only via universities and some large corporations.

Sarah wants to think about the possibility of an intersectional kind of decentralization: one made up of several decentralized systems (geographically, architecturally (IT), in governance, wealth, etc). Before we can build these kinds of systems there are several things we need to consider:

An area that is often left out of decentralization discussions is hardware manufacturing. These processes are in fact highly centralized, and vulnerable to political shifts and natural disasters. There are some examples of decentralized hardware (e.g. Librerouter and Makerbot) but they lack the precision that’s needed to build computers.

While open source is often used as a way to signal decentralized software buidling, but there are actually only a few contributors (e.g. 52% of Github commits are made by 1% of contributors and similar statistics exist on other platforms). Not everyone has the time or the skills to contribute, and it’s worth contemplating whether it would be beneficial to society if many more people did spend time building software. At what cost to other specializations would this come?

Artist Taller de Casqueria talks about his project Black Islands, that investigates the land disputes over islands in the South China Sea in which digital means are used to prove ownership.

There are international standards for determining which country owns which parts of the sea, based on how many miles away it is from a coast. Being surrounded by Vietnam, China, the Philippines and other countries, and being rich in natural resources, islands in the South China Sea are especially valuable. If a country can claim ownership over it, that means their ownership over the surrounding waters can also be claimed.

Traditionally, to claim ownership a country would need to physically occupy the island, but the ‘war’ can now also be waged through digital means: writing and rewriting Wikipedia articles, tagging images to a specific location on Google Earth. This is particularly present in some of the errors that exist on Google Earth, represented by black spots over islands on the map. The representation of a certain ownership of a locality around the internet becomes a method to colonize them as actual territory. 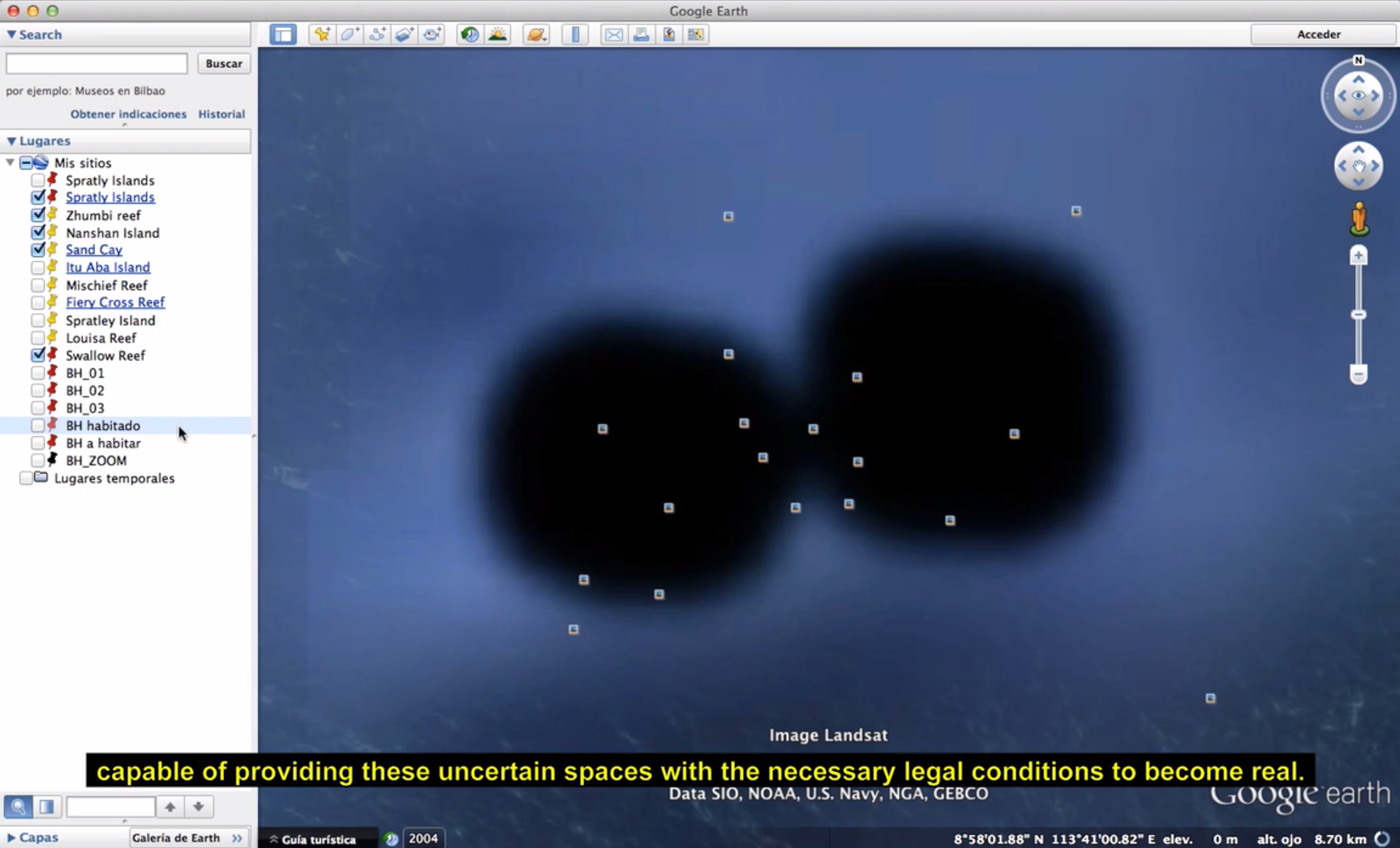 Video of the project

Larisa Mann researches the use of pirate radio (broadcasting without a license) by minority communities in the UK and USA. In England, poor people historically live in high-rises at the edges of cities. This is especially practical in pirate broadcasting, because listeners will be geographically concentrated and the radio waves will be less obstructed by trees and other buildings.

Larissa is interested in the economic systems that exist through these pirate stations, the identities that are constructed, and the way people interact and claim space. She sees that often stations come into being around specific diasporic communities, like Haitian-Americans or British-Caribean people.

The term ‘exilic spaces’ refers to the way people are making relationships between each other in these diasporic communities that are not wholly defined by colonial systems or local dominant cultures. In these spaces, borders are important and need to be defended, access is regulated. This means that anyone that enters this exilic space, enters on the terms of the people that constructed the space. (This clashed with the spirit of openness that reigns e.g. in the Bay Area.)

Even though web radio and podcasts made the phenomenon of a limited radio spectrum a thing of the past, pirate radio is still a flourishing scene. This may be due to the central cultural significance of the radio (in relation to low literacy rates) in some of the countries of origin of these diaspora (Larissa gives the example of Haiti). 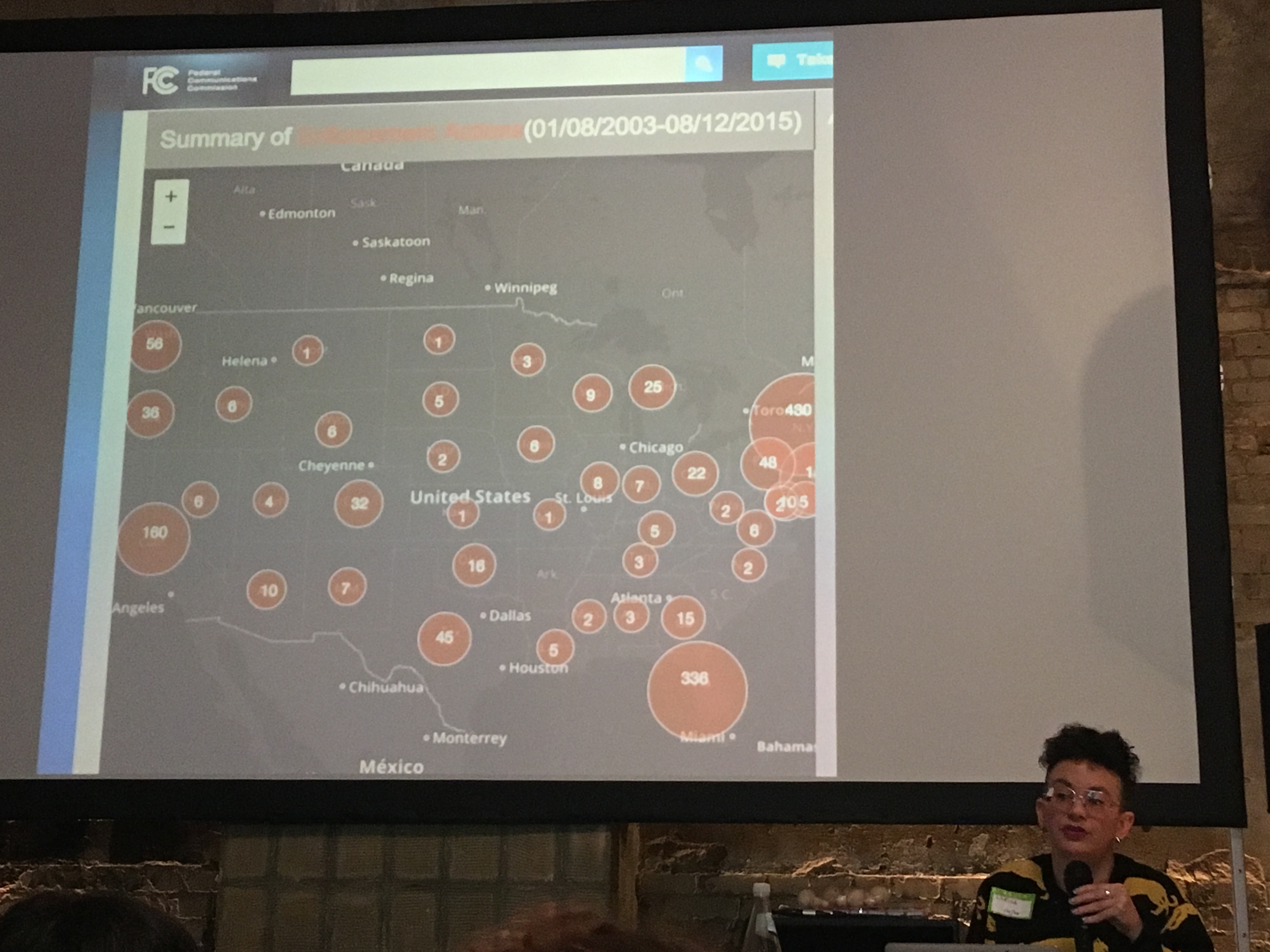 By broadcasting and listening to pirate radio stations, Larisa says people are:

Alternative ways that radio technologies are used are:

<I was so wrapped up in the talk / performance that I forgot to take notes, but I do want to mention this here because it left a big impression. I will add the video when it is published.>

Networks are generally visualized as a collection nodes interconnected by edges. Max reimagines networks through a more Deleuzian lens, and asks us to let other senses than the visual guide the representation of the network. In the description of the talk they write: “What would a social network look like if it were modeled after the fluid dynamics of water?” and “Following network theorist Tiziana Terranova, we suggest that contemporary internet network models derived from graph theory and based on the diagrammatic “node” and “edge” deploy economic reductions of society that re-inscribe capitalist logic.” How can we make a model of a network without conforming to this logic? What can we learn from the tactics of culture jamming, from moments of radical connection and from the existence of noise?

Additional interesting projects that were presented at Radical Networks

Boattr: mesh networks on the canals of the UK

Sea-watch.org: fighting fortress Europe by mapping and rescuing in the Mediterranean, collaboration with Forensic Oceanography

Low-tech Magazine: building a low-tech website that is so small it can be solar powered and raises awareness about the use of energy while browsing.

Scuttlebutt: an off the grid, p2p gossiping protocol

Pocket FM: connecting internet and radio, to use in hard to reach areas.

Rootio: community radio as a means in crisis response.

Tactical Archives: making the counter-cultural history of the internet in Brazil accessible.

Floating Swarm: art in the interstices of networks, to be viewed using Beaker Browser.

Weaponized Design: how interfaces direct us