The Mystery of the Non-Finito, or Making Does Not Produce Artefacts by Wim Nijenhuis

Text of the speech at the book launch of the INC Critical Makers Readers, Theatrum Anatomicum, Waag, Amsterdam, November 21, 2019

I will elaborate my thesis with a small consideration about the workshop Building Nests, which was led by the Dutch architect Alex van de Beld, with the assistance of the Dutch philosopher Peter de Kan and the Swedish landscape architect Petter Haufmann. The exercise was part of the Alp surroundings event organized by “Eesti Arhitektide Liit”, the architectural association of Estonia and took place in the forests of the same country. The participants were professional architects, landscape architects, artists, and students. During five days of living on site and working with their bare hands they produced this piece of work, which is shown above. They called it ‘Nestonia, a plaited nest hanging in the trees’. 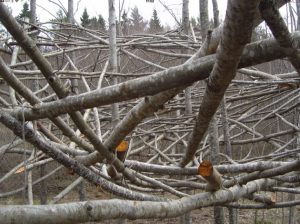 Walking through the woods, the participants have collected branches and twigs of different length and diameter. These branches, which were sometimes torn off of trees, to which they grew as part of a living organism, or which were picked up from the soil where they were destined to rot and merge with the humus layer of the forest, became this way evaded from their biological cycle in order to become material, material for constructing eh…, yes, constructing what actually? Subsequently, they selected a few well-situated young living trees in the forest and transformed them into both a vertical support structure and the “warp” of something we could call wickerwork. The selected branches and twigs then were applied as “weft”.

From a technical point of view, a bird’s nest in real nature is not wickerwork, but rather an entanglement, a kind of tangle intertwining of twigs and other slightly flexible materials. On the inside, the bird often reinforces this primary framework with mud, on which he subsequently applies softer materials. In the final stage, the bird turns around its axis in order to create a round lining of soft grass and feathers on the inside. According to biologists it is the characteristic of nests that the twigs are pressed into each other and against each other under a slight bending stress and that twigs with a slight bend are pulled through the existing tangle. The bending stress of the curved twigs keeps the structure together.

The so-called “nest” that the participants made in Estonia is not covered with mud on the inside; also the softer materials such as grass and feathers are missing. Due to these defects, the construction has not reached a stage where it could be of any practical use. The making process is stuck at an airy and tangle intertwining of branches and twigs that are bent around the selected trees in a variable bandwidth at eye level.

Apart from what we think of the result, the participants have at least gained an instructive creative experience. During bending and joining, for example, they have experienced the effect of the varying cooperative and recalcitrant character of the material. Because they had to work with their bare hands they were obliged to use their muscle strength and doing so they discovered how much force they had to exert on the branches to get a certain bend and what tricks they had to apply to fix the unwilling material where they wanted it. Bending is not only about force in one direction, because the deformation of the branches and twigs is guided by fibers that have been formed in the wood through growth when it was still part of the living tree.

When the branches are bent by the maker, they tend to shoot away in all directions and sometimes to twist quasi uncontrolled.  It is these spontaneous movements, which are directed by the “variable undulations and distortions” of the wood’s fibers, that the makers then recognize as recalcitrance or as participation. By somewhat following and slightly tweaking these twists, the makers produce a shape that was already latent in the variations of the material itself, that’s to say in its energy lines of pressure and tension.

After the participants had more or less brought the branches into position and then released them, they were instructed by their own intelligence to spring back into their original form. This did not quite work out, because they stopped their movements mutually, or because there movements were stopped by the trunks of the trees around which the tangle was arranged. The reciprocal pressure that arose as a result of this, which we call bending stress, kept the tangle construction together by means of friction, in such a way that it eventually assumed a more or less ellipsoidal shape.

This form, which is the remaining trace of the interplay between the energy lines of the branches, the passive resistance of the trees and the active exertion of force by the participants, follows a curve that coincides with a chain of points where the efficiacies of the three participating parties are aligned and regulate each other. This curve is the line of correspondence, or even better: the line of sympathy. (connecting correspondences, or resemblances of random elements)

The sympathetic line follows lines of force, regulates their interaction and their balance. 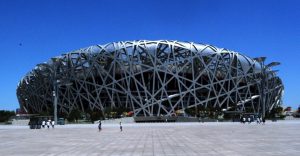 The shape that is informed by the sympathetic line is completely different from the nest-shaped stadium that Herzog Demeuron built in Beijing in collaboration with Ai Wei Wei. Although the suggestion of the name is the same, “Nest,” the curves here are not the result of sympathizing forces, but of the architects’ conscious action. They copied a visual model and imposed it violently on the materials.  In contrast to the form created through violating material, the workshop participants in Estonia created a form by following a mutual rule.

To be able to adapt to the play of forces, we must shift our focus from the final form to the infinity of the pure process and the rule set by the material. This implies that the maker can have nothing but a vague, or no idea at all of ​​what he or she is making. When there is no premeditated idea of the form to be made, how then does the (infinite) process come to a form, how did the so called nest of the participants in Estonia arrive, be it provisional, at its final form?

The most likely hypothesis is that the final form is the result of an “interruption without continuation.” The French surrealist thinker Georges Bataille has formulated this statement as a criticism of the power of the idea, the intention and the project, the three key elements of modern instrumentality. What does such an interruption look like? I can vividly imagine that the participants will stop at some point because they get tired or because they no longer feel like it. It can also happen that the sun sets and that it gets dark or it gets cold, or it starts raining or snowing. Because they stop for a random external reason, the process, better yet the flow, of making comes to a halt. The object in the making, which is always also an object that offers possibilities to continue the process of making, solidifies in a relatively fixed form, regardless whether the participants have desired this form or not.

When the focus is on the process and there is no premeditated form-idea to regulate it, the endpoint is always some unplanned interruption, causing an equally unplanned outcome. This is the mystery of the Non Finito, the final form that cannot be finished.

My body, my traitor: essay in 10TAL

Last year Swedish magazine 10TAL published an essay of mine about data mining, the body, and self-knowledge. Now, the English translation has been published too! Read the opening below or click through to the whole text: My body, my traitor   We’ve come a long way, baby. From »On the internet nobody knows you’re a [...]

Authors: Gabriele Ferri, Inte Gloerich “The Butler Timeline (BT) is a parallel universe where renowned speculative fiction author Octavia E. Butler engaged in a critical dialogue with researchers in human-computer interaction, shaping the genre of design fiction differently from how it unfolded in our timeline. Here we present a meta-speculation, imagining what could have been [...]