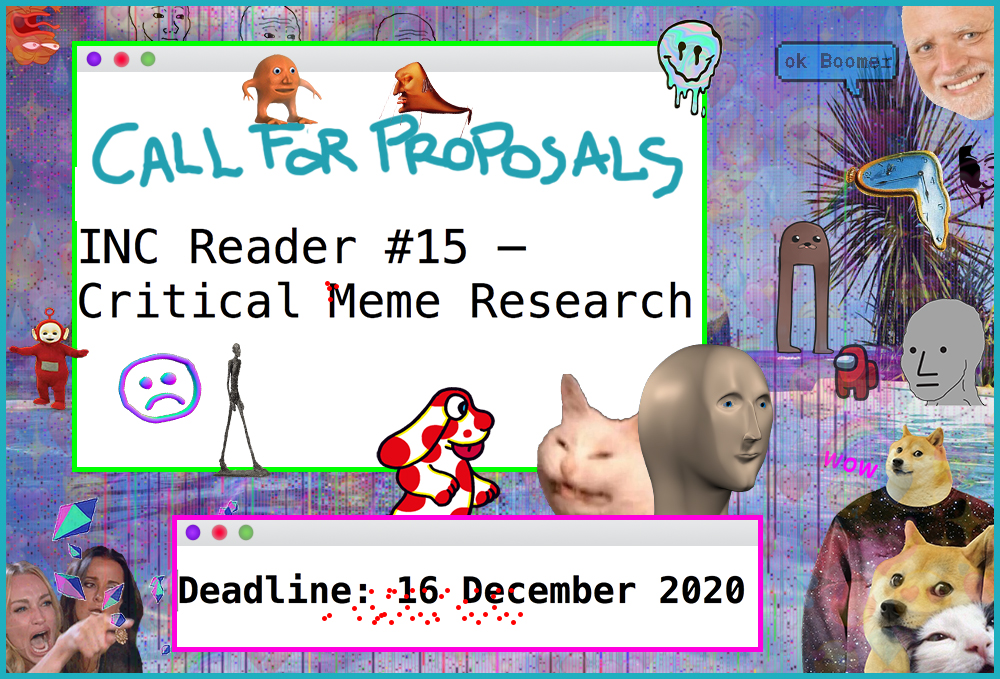 As they metastasized from the digital periphery to the mainstream, memes have seethed with mutant energy. From now on, any historical event will be haunted by its memetic double — just as any pandemic will have its own infodemic that will recursively act upon it — issuing in the kinds of cross-contamination that Baudrillard already prefigured in the 1980s: of the convoluted age of simulacra, of epistemological crises associated with postmodernity, and of a generalized informational obesity whose gravitational pull bends reality to whatever “program”, in the multiple senses of that term.

In its idiosyncratic track, our responses to memes in the new decade demand an analogous virtuality. Beyond the so-called ‘Alt-right’ and its attendant milieus on 4chan and Reddit, memes have passed the post-digital threshold and entered new theoretical, practical, and geographical territories beyond the stereotypical young, white, male, western subject.  While academic scrutiny has largely lagged behind memetic production, online-facing media has tended to uncritically relay or clutch its pearls in ways that malicious actors tactically exploit. These conditions demand an approach that matches the deterritorializing violence of memes: their ability to abstract and frame, deduce and reduce, to distill and hide, and to alter our perception and behavior through contagious spectacle and cognitive terraforming.

Lastly, what will become of the meme that has been declared dead yet refuses to go away? Does the very notion of a meme become redundant once it is all-pervasive, like any successful cultural technology? Yet we also seek to revisit old territories: what can we salvage from these affective and aesthetic ruins to re-enchant our present appreciation of memes and meme culture? How can we (re)theorise the meme as something between a semiotic surface and asignifying network (or something else entirely)? How can we apply the meme (as it is now/as it will be) as a hermeneutic for the study of other online phenomena like the spread of conspiracy narratives? How are memes made and deployed beyond spaces of (sub)cultural production and what are the implications of this?

What is it to see oneself in a meme?

We invite authors from a variety of disciplinary and cultural backgrounds to contribute manifestos, essays, interviews, fictions, artworks and other speculative interventions in our understanding of what memes are, or will be, in the process of becoming.

Potential topics include, but are not limited to:

INC Reader #15 – Critical Meme Research  will be edited by Chloë Arkenbout, Jack Wilson and Daniel de Zeeuw. Proposals/abstracts should be around 300-500 words. Send these to criticalmemereader[at]networkcultures.org by 16 December 2020. Final texts should be 500-5000 words and submitted by 10 March 2021.