Among many online subcultures and communities, there is an online space which rejects Internet-era aesthetics in exchange for the soft glow and calm reminiscent of romantic paintings. Rustic picnics, flowing garments, embroidery tutorials and tours of cosy homes await on the cottagecore tag on TikTok, the uber-popular social media app that lets users edit, share, watch, and interact with short videos.

While it seems nothing more than a meeting place for users with common interests in baking, nature and vintage fashion, a closer look at this aesthetic movement reveals many surprising facets. The potentially transformative effects it may have on young people’s pace of life, their perception of labour, success, and the relationship with the natural world are just a few of the most promising ones. 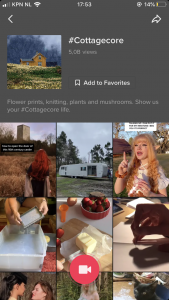 Even though the cottagecore aesthetic seems to have originated on Tumblr around 2017, it noticeably gained popularity on TikTok in early 2020, attracting over 5 billion views under its hashtag. It comes as no surprise that in 2020, COVID-19-induced lockdowns made cottagecore very appealing, allowing users to experience the great outdoors from the comfort of their own homes, and learn how to do a variety of indoor-friendly activities. It may not be a coincidence that the early-2020 craze of sourdough baking happened just as cottagecore rose up the ranks of popular Internet gen-z aesthetics. However, cottagecore is not just another distraction from real-life struggles, nor a fleeting hobby for young people to perform. Somewhere amongst the well-timed crochet transitions, uplifting classical music scores and tonnes of vintage lace sits a revolutionary idea; one of domestic labour that exists outside of the oppressive forces of both the patriarchy and late capitalism.

In cottagecore imaginaries, men rarely make an appearance. Most social media users appearing in cottagecore corners of the Internet are young women – especially non-heteronormative ones – and non-binary people, both as content creators and those who interact with the content. This link cannot be incidental and has been noted already, framing cottagecore as an aesthetic that offers an escape from patriarchal hierarchies, facilitating a dream of a wholesome life with a loved one away from homophobia and misogyny. The term ‘cottagecore lesbian’ is coined, and it is as charming as indicatory of unfavourable conditions so many queer women endure, either in total invisibility or as subjects of rampant sexualisation. In cottagecore imaginaries, queer couples are free to be together in private and public spaces. There is no shame or scapegoating, just a comfortable, happy life. 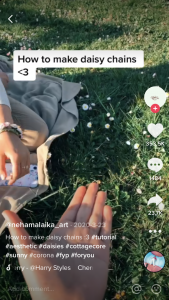 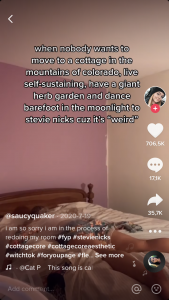 However, the reality of being queer outside of the city is much less accommodating. Perhaps the line between daydreaming and escapism is rather thin, and the movement did gain some criticism for its escapist and romanticising tendencies. VOX writer Rebecca Jennings points out the cottagecore paradox of longing for a modest life in the countryside: “Indeed, cottagecore ignores the fact that rural areas have always been unattainable for some and inescapable for others.” Still, participating in the cottagecore community, not unlike other aesthetic online movements, rarely leads to drastic changes IRL. Their appeal lies in the ease with which one can participate and quit; all it takes is to swipe into another TikTok community, or close the app. On top of that, it would be counter-productive to discard a community for offering temporary online refuge from real-life oppression. As long as it does not lead to propagating other types of (less conscious, perhaps) oppression, cottagecore has the capabilities to allow for a re-imagination of community bonds and ways of life in a more collective and less exploitative future. At its best, community-building is one of the Internet’s few assets, but it is a two-sided coin, and some users do utilise it for malicious causes.

It may be surprising that a queer-friendly and anti-patriarchy online movement/aesthetic crosses paths with something much more sinister; namely, the TradWife community (which stands for Traditional Wife). On her blog, writer Shannon McNamara notes that the two may enjoy some similar imagery, but present wildly different sets of values. TradWife online communities propagate the blood-and-soil narrative of white supremacy, imagining a return to the days of female servitude and unpaid, oppressive domestic labour performed under the guise of fulfilling the ‘natural order’ of gender roles. Images of plaid-haired blonde women in flowy dresses tending to domestic activities indoors and cultivating the land align perfectly with fascist and white supremacist fantasies of male domination and a return to a pre-modern and pre-industrial way of life; of course, at the high cost of personal liberty and freedom of marginalised groups.

Set against this oppressive dystopian landscape of servitude and exploitation, cottagecore emerges as a much brighter image of diverse and progressive countryside life where individuals need not serve an individual or profit-making structures that exhibit discriminatory viewpoints and promote different types of violence. Here, activities which are considered traditionally feminine matter because they can bring enjoyment, not because they are useful to, or expected from, a patriarchal figure. The misogynistic connotations connected to activities like cooking, crocheting or sewing are actively rejected. Here, there is the freedom to enjoy these tasks and not be mocked for them or associated with a certain type of femininity. Cottagecore imagines a space where women and gender-nonconforming people can experiment with signifiers of traditional femininity with no strings attached and no consequences. This approach stands in stark contrast to the controlling TradWife narrative that fulfils a white supremacist fantasy. In order to not be complicit in this small yet problematic overlap of aesthetics, cottagecore enthusiasts must remain vigilant not to promote or share content originating from TradWife social media accounts, and speak out against the continuing shadow-banning people of colour – especially black people – experience on TikTok. At its best, cottagecore can be a pro-LGBTQ+ and anti-racist community. Further education on anti-racism and anti-colonialism can help to achieve this goal; this, too, can be found on the app, and users often recommend further offline reading, encouraging individuals to continue learning.

The concept of exploitative labour seems to be non-existent from cottagecore fantasies. In these images and video clips, all labour is domestic and/or creative, and it is performed based on the needs of the individual(s) appearing in the content. There is no excess production, exploitation of the natural environment, or aspiration to make financial gains. Cottagecore is anti-capitalist at its core, exchanging constant productivity, hustle culture and accumulation of private wealth for slow living, environmentally conscious practices and seeking value in actions and habits that do not generate an income. While the popularity of cottagecore aesthetics coincides with a combination of recent events like COVID-19 lockdowns, a boom in Victorian-stylised TV shows and Taylor Swift’s hit album evermore, it is also undoubtedly a reaction to an overstimulated and oversaturated life many young people are living. We resent some of our modern technologies but rely on them, nevertheless. We want to plan our futures but are facing an ecological disaster. The attention economy drains our vitality.

Even though the irony of accessing cottagecore through the very same social media apps we critique is not lost on me, I do believe this aesthetic and its community can teach valuable lessons about slow living, the importance of offline hobbies, and the possibility to be fulfilled by things other than financial gain and material wealth. Cottagecore offers a glimpse into a future in which individuals are less concerned with their status, and more in tune with the intrinsic value of everyday tasks. Activities that may seem as mundane and even ‘unproductive’ in late capitalist modes of thinking become restorative and calming, serving as reminders that there is so much to appreciate in our ability to create, feed ourselves, and construct our living spaces. 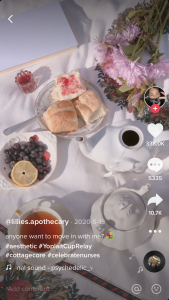 On the other hand, we must be aware of the accidental consumer-oriented tone some cottagecore videos do fall into. Lavish tours of twee yet expertly renovated nineteenth-century homes, clothing hauls of sustainable/vintage collections and recipes shown in meticulously decorated rustic kitchens can all add up to make cottagecore a high-cost lifestyle. However, rather than focusing on the material aspects of some of the content, many cottagecore fans praise the movement for embracing low-waste and DIY practices. They insist that people should not feel pressured to purchase products to feel part of the community. Baking bread, embroidering a jumper, going for a nature walk or reading second-hand books are just a few examples of activities that fit into this aesthetic. Cottagecore content creator and baker, NY-based Noemie Serieux explains that cottagecore helps people find pockets of joy and peace, even in an otherwise fast-paced big city lifestyle. Serieux also compares cottagecore to her Caribbean upbringing, pointing out that both involve sustainable practices and DIY. Indeed, as long as individuals are aware of the consumerist potential of cottagecore, they will be able to participate in a way that matches their circumstances and monetary situation. In the end, breaking the bank ‘for the aesthetic’ would go against cottagecore’s homespun and upcycled essence.

It becomes clear that young people facing a kaleidoscope of uncertainties and worries find refuge in the romanticised microcosm of cottagecore, and can emerge from it more critical of systems that make this peaceful lifestyle so unattainable in the first place. Continuing the conversation about these aspects of cottagecore will make the community even more self-aware of this budding potential.