‘Will the post-corona universe be just another future or something new “to come”?’ – Slavoj Žižek

Corona is a reset. A chance to learn. An opportunity to grow. After all: never let a good crisis go to waste. True enough, there’s plenty of injustice in the world to justify a thorough reset. But the question that crossed everyone’s mind at least once in the past year is: what kind of reset will this be? Or, to use the phrase commonly used in the Dutch public debate, what will the ‘new normal’ be like?

During the better part of 2020 and the start of 2021, in-person gatherings have been reduced to a minimum. While understandable in terms of crisis management, these measures deeply affect public life: education stalled, cultural activities were decimated, and the institutions of Dutch democracy have entered into uncharted and wobbly territories.

Funny enough, a part of the public debate moved to the streets in the meanwhile. A wild discussion about the old and the new normal has unfolded – through posters and stickers. The beauty of this debate is its conciseness: a poster or sticker only has to get across its message (whether political, cultural, or nonsensical) in one image. Let’s take a tour.

During the first months of the first lockdown, the international – but predominantly Dutch – campaign Stay Sane Stay Safe was launched. It seemed like every socially aware designer alive was on board. Within a matter of days, hundreds of posters were uploaded, promoting to ‘flatten the curve’, ‘stay in’, ‘keep distance’, and ‘call your grandma’. 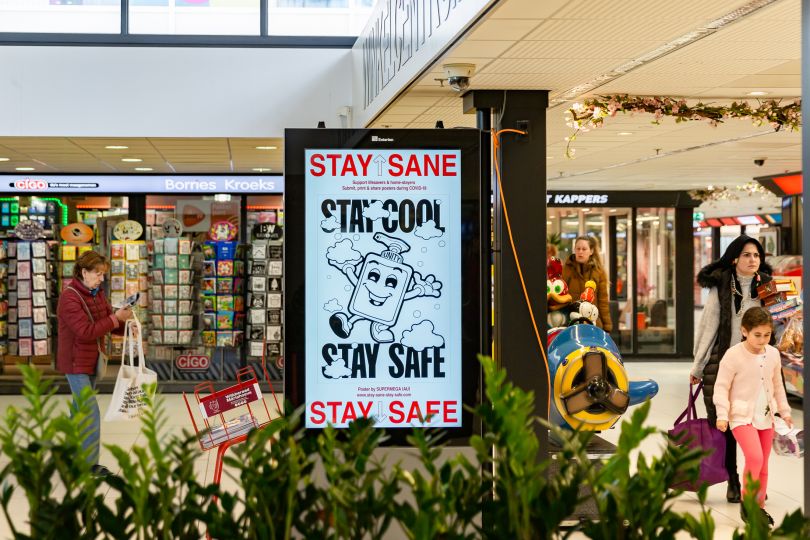 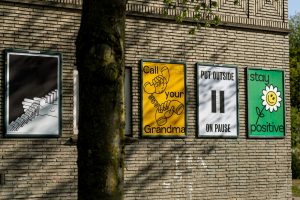 This was nice. Harmless. Sane and safe. It was March, and the weather outside was beautiful. You would almost think that corona was nothing more than a reason to make sleek posters and act woke.

Not much later, Dutch graphic designer Rob Simon made a series of posters around the ‘new normal’ (signed with ‘Georgies’). Rather than promoting social distancing and mask-wearing, he raised questions. Simon stated in an interview with a local newspaper that he wanted to ‘trigger people to think’. 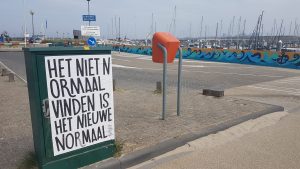 While these posters show a degree of discomfort about temperature checks at supermarkets and bonuses in the banking sector, they’re not necessarily critical. They refrain from any overt political statement and remain purposely vague. But there is a shift when compared to Stay Sane Stay Safe: from happy obeying to active thinking. 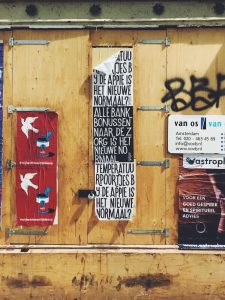 What Do You Really Really Feel?

Well into the summer (August-September), a group of Amsterdam-based community artists also started raising questions under the hashtag #HoeGaatHetEchtMetJe? Going back to the local basics, and realizing that those hit hardest by the crisis are often least visible in public space, these artists went into the different neighborhoods of Amsterdam and asked people intimate questions to find out how they were ‘really’ doing. From the conversations, a selection of quotes was printed on posters, distributed through the city, and launched at Framer Framed. The more political (although by no means party-political) reasoning behind the project is not hard to guess: it is the task of artists and art institutions to challenge the aesthetic regimes of the sensible, that determine what is visible and what is not.

There were skeptics from the start, mainly among the ranks of anthroposophists and conspiracy theorists. Vague critiques of the child-rape by the ‘deep state’ or collective poisoning by ‘big pharma’. Sentiments and fantasies that represented a materially valid dissatisfaction, a good Marxist would say. I don’t want to be the Big Psychologist here (or the Big Material Dialectician, for that matter). However, I think it’s fair to say that they hardly presented any serious threat to the dominant political narrative of crisis management. 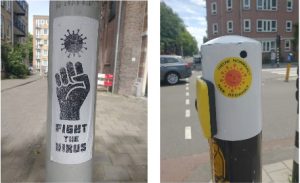 But in November 2020, while the measures were loosening, the first real cracks started appearing in the narrative of common cause and uniform solidarity. It started becoming obvious how the corona measures impacted certain parts of the population more heavily than others. The education gap was demonstrably widened. Reports of domestic violence rose. Some people fled to their holiday destinations while others stayed home because of financial troubles. As the sociologist Justus Uitermarkt put it: the common trust and conformism started to wear off. No-brainer solidarity once of a sudden turned into a political question.

In fact, already since July 2020, a poster was circulating in Amsterdam (as well as on Reddit), which read: ‘We cannot go back to normal. Because “normal” was exactly the problem.’ 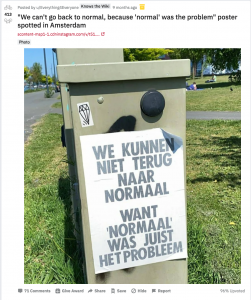 From something that we all just had to do and accept, it slowly became clear how corona measures – and the political decisions behind them – impacted some people harder than others, materially as well as psychologically. Now the end is in sight, the question is no longer so much if we will get there, but how. Which companies and organizations will make it through? Who will lose their job (or sanity) before it’s all over? Do we let students go to university, or do we rather open nail and hair salons first?

In a recent Jacobin Magazine article, Slavoj Žižek joined the discussion. We should reject, he asserts, the false dilemma of choosing between things that we can imagine. The left-leaning and liberal world sighed with relief as Biden was elected president of the US. But we know that Biden’s centrist and bipartisan politics of reconciliation and ‘healing’ in fact signal a return to pre-Trump normality. Alternatively, the great reset might lead to a tech bro utopia – a corporate Great Reset.

We can imagine both of these post-reset normalities, either as a return to 2019 or as an extrapolation of the ever-increasing power of Big Tech. But do we have to choose between a return to the old, exploitative normality and a post-Covid corporate Great Reset that promises to be even worse? What we really need, Žižek states, is ‘a socialist reset that can win justice for all and save the planet from climate apocalypse’.

This is where the public discussion is at in The Netherlands as well. We’re close to a reset, but what kind of reset? Do we stick with the lazy and unpolitical narrative of unavoidable crisis management, or will we manage to stretch and expand our imaginations?