In the early morning of April 14th, 2021, the four editors of the journal DOXA were arrested by Russian authorities. Armen Aramyan, Natasha Tyshkevich, Volodya Metelkin and Alla Gutnikova appeared in court later that day. The purpose of the charges were made clear by the judge – to silence critics – who ordered the editors to house arrest and has restricted them from all electronic communication.

DOXA is a Russian student-run popular journal dedicated to critiques of the modern university. They have served as a clearinghouse for disseminating radical philosophy, especially feminist, Marxist, and anarchist voices. It also hosts editorials about the sprawling Russian university system, highlights student protests, and organizes solidarity for students harassed for speaking out.

The charges against the editors are preposterous. DOXA had posted a rather innocent video urging others to protest without fear and that expelling students for political reasons was unlawful. In response, the Russian communications authority Roskomnadzor demanded they remove the video. DOXA complied and removed the video. Even then, the editors were charged under Article 151.2 of Russian law (“involvement of youth in activities that can be harmful to them”).

Perhaps there is some honor to being charged with the same crime as Socrates? Yet it is remarkable to suggest that university students need protection from DOXA. Only one who uses education to manufacture obedience outlaws critical thinking as self-harm. And it is no coincidence that laws like these are also used against social critics, queers, and migrants.

The Institute of Network Cultures urges all charges to be dropped against the DOXA editors and that all harassment of students immediately cease.

2) Chronology of Events (in English) https://open-assembly.calarts.edu/index.php/2021/04/14/doxa-chronology-of-events/

The information above has, in part, been collected by ‘Dark Deleuze’ Andrew Culp, now teaching at Calarts/LA. Please sign his petition. He writes:

“I am reaching out because the student-editors of the Russian journal DOXA were arrested earlier this morning under the charges of “corrupting the youth” by encouraging other students to protest. The event is deeply personal for me, as DOXA was a part of the cohort that has hosted me a number of times in Moscow and I have grown to know some of them quite well.

Perhaps like me, you are pessimistic about petitions. But after expressing this to DOXA earlier this afternoon, they still requested an international solidarity statement from scholars. And if nothing else, it is crucial to mark the absurdity of charges like these whenever they arise. So today I penned a statement in consultation with Slavoj Zizek, with whom I keynoted a conference hosted by DOXA in 2017. The statement can be signed at tiny.cc/DOXAsolidarity.” 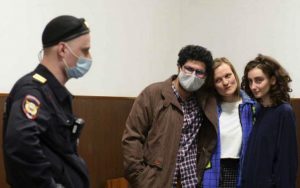