In this blog series I explore a burgeoning intimate surveillance culture in neighbourhoods across the world.  At the core of this research is a flourishing network of surveillance technologies produced by Silicon Valley and perfectly tailored to a vigilant and paranoid home-owner. This matters. Because being watched by the state is one thing, but being watched by your neighbours invites myriad more questions.

Where I live in the east of Amsterdam I’m surrounded by generous neighbours. We often exchange news in the building’s stairwell, borrow things from each other and generally care for our communal space. It’s a wonderful place to live and I am comforted by the feeling of togetherness and trust in our neighbourhood. Most of my immediate neighbours happen to also be in a WhatsApp group. When I first moved in I was completely unaware of the group. But, not long after I’d unpacked there was a letter in the post from the police, urging me to join. The letter stressed that by joining the group I could make our neighbourhood “safer and more peaceful”. So of course I did.

For the most part, the dynamics in our WhatsApp group simply mirror the dynamics I experience when I meet neighbours face-to-face. There’s a bit of information sharing, some friendly banter. Occasionally someone flags something suspicious. In one instance a neighbour with a Ring doorbell camera, which records footage of anyone who rings it, posted a video in the group. It showed a young man with well-coiffed hair wearing a black leather jacket. He was lingering outside the door waiting for the doorbell to be answered. It never was. The neighbour, clearly suspicious, urged others in the group to be on the lookout. Another neighbour zoomed in on the footage, screen-grabbed it and posted an enlarged and  pixelated image of the man’s face back into the WhatsApp group. I received the message on my phone mid-way through dinner. I was confused. What makes this person suspicious? And what exactly are we on the lookout for?

This anecdote goes to the heart of my research. For the past 7 years I have been exploring how technology shapes neighbourhoods and influences neighbours. I am particularly interested in what impact our domestic surveillance devices, like smart doorbell cameras and mobile messaging groups, have on social cohesion and our feeling of safety. Most urgently, this research zooms in on the role that technology plays in creating inclusive spaces. With my creative partner Klasien van de Zandschulp, we have researched neighbourhoods across the globe, from our hometown of Amsterdam, to York in England, Johannesburg, San Paulo, New York and the rural farmlands of the Netherlands, interviewing people about how they use domestic surveillance technology to watch their streets and homes. Amazingly, what we’ve found is that neighbourhood surveillance, enabled by technology, is not unique to wealthy cities with plenty of technology. Instead, it happens in all kinds of places across the world, albeit on different scales and with different implications. We see the rise of an intimate surveillance culture. What I mean by this is that neighbours are buying technology like Ring or Nest doorbell cameras and joining messaging platforms like WhatsApp, Nextdoor or Neighbourhoods (from Facebook) to police their space. Intimate surveillance is booming in streets, buildings, gated compounds and townships, enabled by affordable surveillance technology and social media platforms perfectly tailored to a vigilant consumer.

A great example of this is in the Netherlands where you will most likely spot a street sign with the words “Attention! WhatsApp Neighbourhood Watch”. The sign is often placed at the start of a street. It signals to newcomers that neighbours in that area are watching their suburb and circulating information about suspicious people in their local WhatsApp group. Amazingly, these signs, and the groups they represent, have been adopted and seemingly normalised as part of communal life in the Netherlands. The police encourage residents to join these groups, just like in my neighbourhood in Amsterdam. Ordinary folks become the eyes and ears of the police. It’s hard to decipher the true statistics here. One source claims there are approximately 9,000 registered WhatsApp groups dedicated to neighbourhood surveillance. This accounts for about 630,000 residents. Yet, there are thousands of other groups that aren’t registered but they do exactly the same surveillance work. 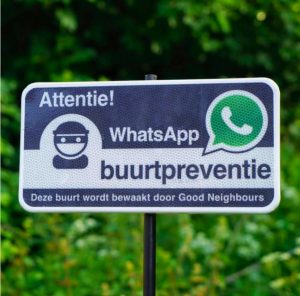 For a mere €75, you can order a WhatsApp neighbourhood watch sign for your street in the Netherlands. We had this one custom made for our live performance ‘Good Neighbours’ in Amsterdam in 2021.

WhatsApp neighbourhood groups are however only the tip of the proverbial iceberg. They form a tiny part of a much larger ecosystem of surveillance technologies in neighbourhoods. Another popular device (the rising star of surveillance gadgets) is the Ring doorbell camera. Ring is the humble doorbell redesigned for a paranoid networked society, complete with its own Instagram account and 152,000 followers (as of 2021). In December 2020, when many people were locked down in their homes during the corona pandemic, global online sales of Ring cameras jumped by 180% compared to 2019. In December of 2020, Amazon.com sold nearly half a million Ring cameras to American consumers. 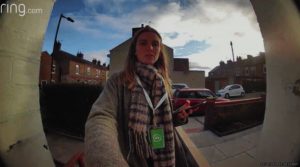 A recording from a Ring doorbell camera in the city of York (UK) where we did part of our research and presented a live performance.

Besides its doorbell function, the Ring includes a built-in camera and motion sensor. If you press a Ring doorbell it films you. If the Ring owner isn’t home they receive a notification on their phone with footage of the visitor. If someone triggers the sensor by walking past, the Ring camera will record that person, regardless of whether they rang the bell or not. Ring owners can even speak through their phones (via the doorbell) to anyone standing outside their door. Sounds convenient right?

In the course of this blog series I will speak into this question, because there’s much more to Ring than convenience (or safety). I will examine WhatsApp, Ring and a few other platforms that are shaping the order of micro politics in neighbourhoods. Pointedly, these technologies raise urgent questions about surveillance, platforms and society. Most immediately, I want to draw attention to the dangerous practice in neighbourhoods when residents sue technology to mark others as strangers who don’t belong. Social and racial profiling are commonplace and becoming ever-more transparent through technology. As Marleen Stikker from Waag Society reminds us, “Technology is an expression of capital and power”. Said more plainly: it’s often about money. Look no further than Nexdoor, a Silicon Valley social network aimed at local neighbourhoods and infamous for facilitating instances of racial profiling,  recently valued at $2,1 billion (up 30% from its last valuation in 2017). This entire series is about keeping a critical public record of the relationship between neighbourhoods, neighbours and their technologies and to keep the focus on what is at stake.

Dr. Natalie Dixon is an INC research fellow and  founder & cultural insights director at affect lab, a women-led creative studio and research practice based in Amsterdam. Her work explores questions of gender, race and belonging through the lens of technology.