BLACK BOX EAST is the project of the Berliner Gazette that was oriented towards uncovering the latent material and ideological structures that keep the eastern, post-communist areas as the (exploited) “Other” years after the Cold War has ended. The name of the project reflects the processes of mystifying “the East” that in turn serve to conceal the unethical, exploitative, and imperialist practices of privatization and globalization of Western capitalism.

The starting point of this investigation was East Germany, however, authors from all over the world have contributed with different geopolitical perspectives on the issue. This provided for the mapping of the broader intersections and creation of a common transnational discourse on the geopolitical currents that profit from the ongoing separation of the East from the West. BLACK BOX EAST spanned throughout the whole of 2021, with various articles on the topic being posted on the website of Berliner Gazette. Submissions in the form of audio and audiovisual material can be found on the website of BLACK BOX EAST.

The project culminated with a three-day conference that took place from 23 to 25 September. The conference featured key-note talks on the economic, infrastructural and political arrangements that shape the contemporary relations between the East and the West. All of the talks were recorded and are available for viewing on the BLACK BOX EAST website. Additionally, the five workshops that were held during that time brought together researchers, activists, and cultural workers from over 20 countries all over the world. They were mediated through the open-source platform Big Blue Button, in aims to surpass the “corporate surveillance tools like Zoom” and resulted in five cooperative projects in the forms of a chess-game, choose-your-own-adventure game, audio play, digital exhibition and a multimedia story. 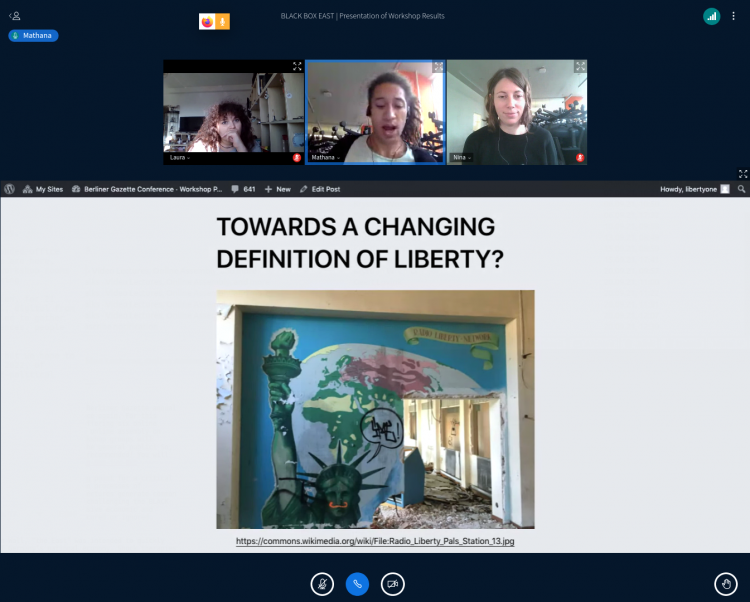 As a continuation of the project, Berliner Gazette will hold a number of partner events, including a webinar “Decoloniality and Eastern Europe” in cooperation with the Transnational Institute Amsterdam, which will take place on November 4 at 6 p.m. CET on Big Blue Button. Registration for the webinar is available on this link.