On Monday, 6th of December, Spui25 organized a panel event How Do Platforms Reshape Cultural Industries? that gathered Thomas Poell, Anne Helmond, David B. Nieborg and Jeroen de Kloet in order to discuss the topics of the upcoming book Platforms and Cultural Production by Poell and Nieborg. 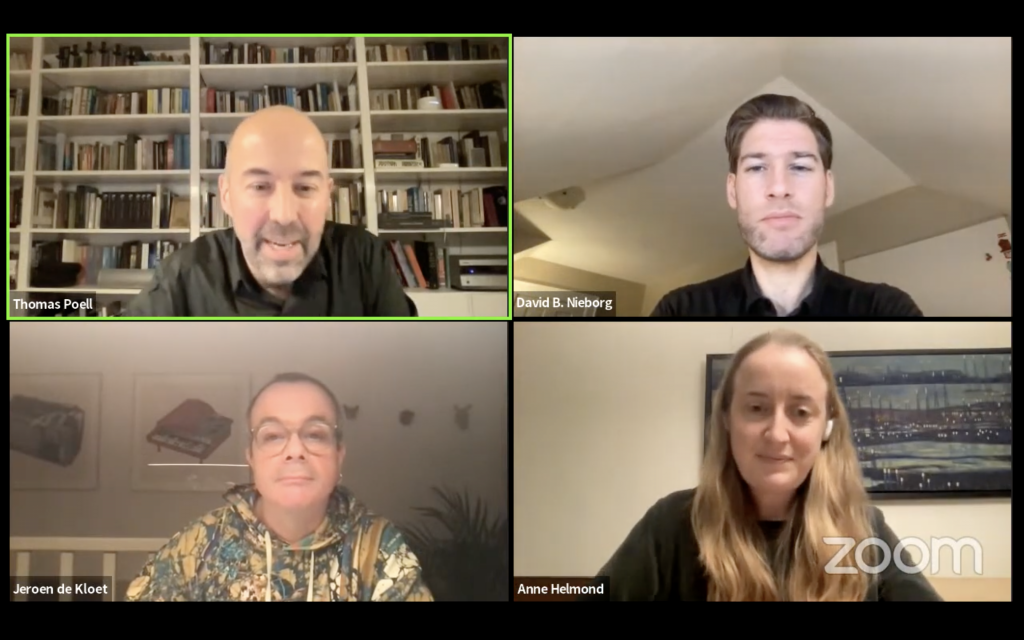 Appropriately, this event took place online via Zoom, a digital platform that has become an emblem of the contemporary, pandemic-instituted conditions of connecting and sharing knowledge (which also brought its owner a multi-billion dollar revenue in 2020). The talk started with Poell’s introduction of the content on the book in which the concept of platformization, which was already introduced by the authors in their previous works, is applied to the exploration of cultural production in the forms now mediated and conditioned by ubiquitous digital platforms. In his talk, Poell defines platformization as the “penetration of digital platform’s economic structural and governmental extensions into the cultural industries, as well as the organization of cultural practices, labor, creativity, and democracy around these platforms.” Even though platforms are primarily defined as ‘neutral intermediaries’ between different agents, such as content-creators, end-users (content consumers), and advertisers, they undeniably create structures that ultimately regulate and govern how their environment operates and how the given agents behave within it.

The impact of platforms on cultural production is marked by the perceived openness that enables almost anyone to become a cultural producer, bearing with itself the promised potential of high visibility and monetary reward. However, this platform affordance comes with the cost of precarity, given that the digital labor of content creators is not in any way protected. Through individualization of labor, platforms place all of the responsibility on the individual a.k.a. the cultural producer. Platforms deflect responsibility, as they are not defining themselves as employers, but mere intermediaries, while simultaneously holding the majority of power in how the digital cultural circuits are formed. Poell notes that the extent of platform intervention is also reflected in what authors named ‘platform evolution’ marked by even the slight changes in platforms’ interface and infrastructure that significantly affect and alter the conditions in which the content is being produced and distributed. Moreover, platforms also produce new digital ‘genres’ meaning that their interfaces and creative affordances model contemporary forms of cultural expression. 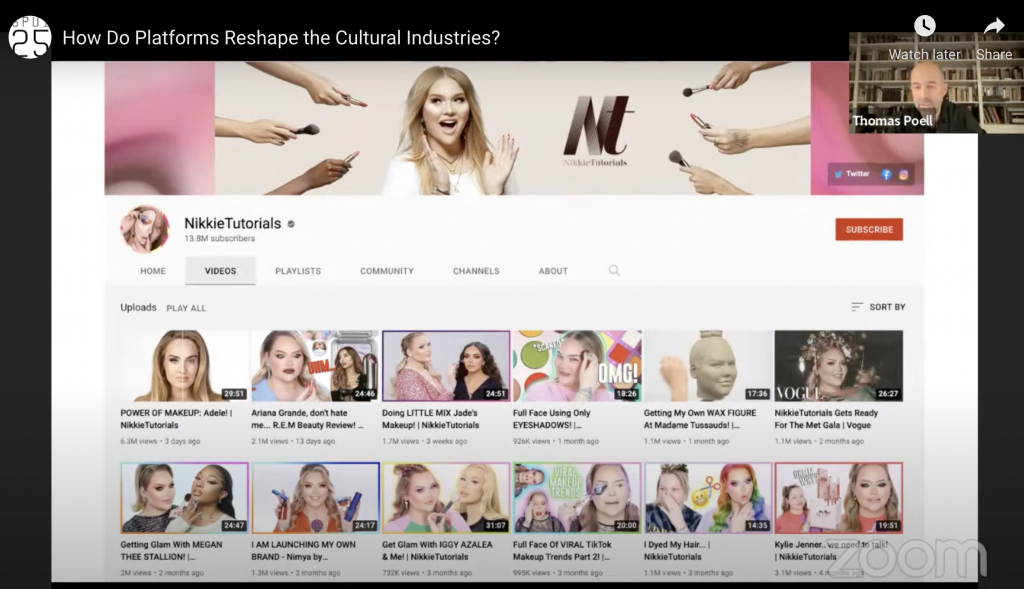 Professor Helmond raised the question of the possibility of differentiation between ‘cultural’ and ‘commercial’ production in the platform environment, given that the platforms are business entities, primarily motored by commercial interests. Additionally, the power relations in cultural and media production that predate digital platforms, such as it is in broadcast media and mainstream cinema, are being consolidated through platforms, as the actors that manage to profit the most in these conditions are the already established media conglomerates that adapted their business models to fit the platform instituted production and distribution of content. 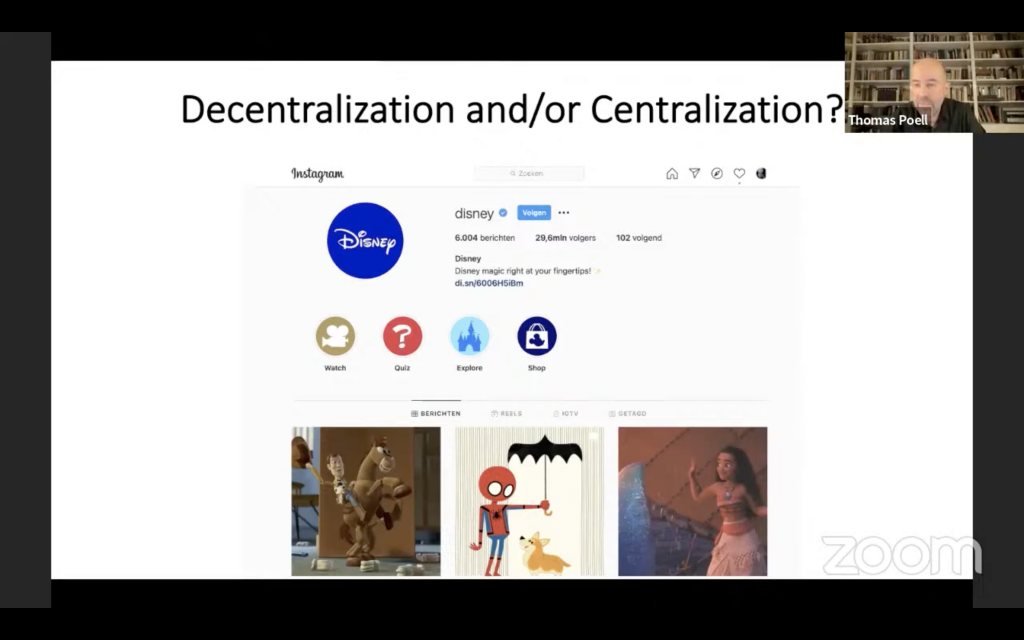 Both Helmond and de Kloet inquired about the possible alternative spaces or practices that subvert the commercial platform dynamics. Nieborg elaborated how the potential for exiting the dominant power relations lies in the content creation on the mainstream platforms, but that distribution remains centralized and moderated by the platform. Alternatively, open-source platforms or potentially publicly funded platforms could be a solution to the monopoly in power that mainstream platforms currently hold. 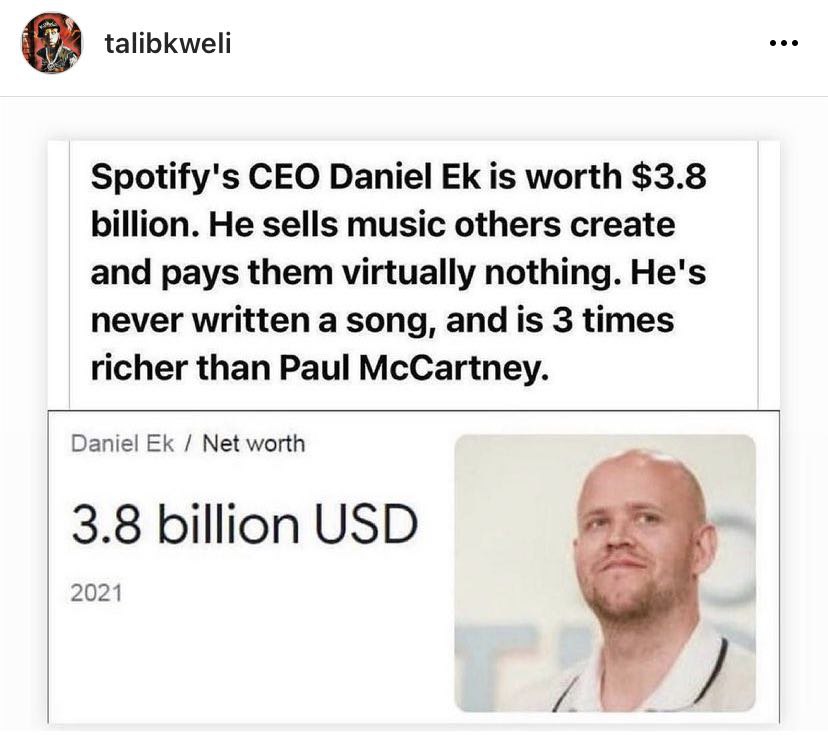 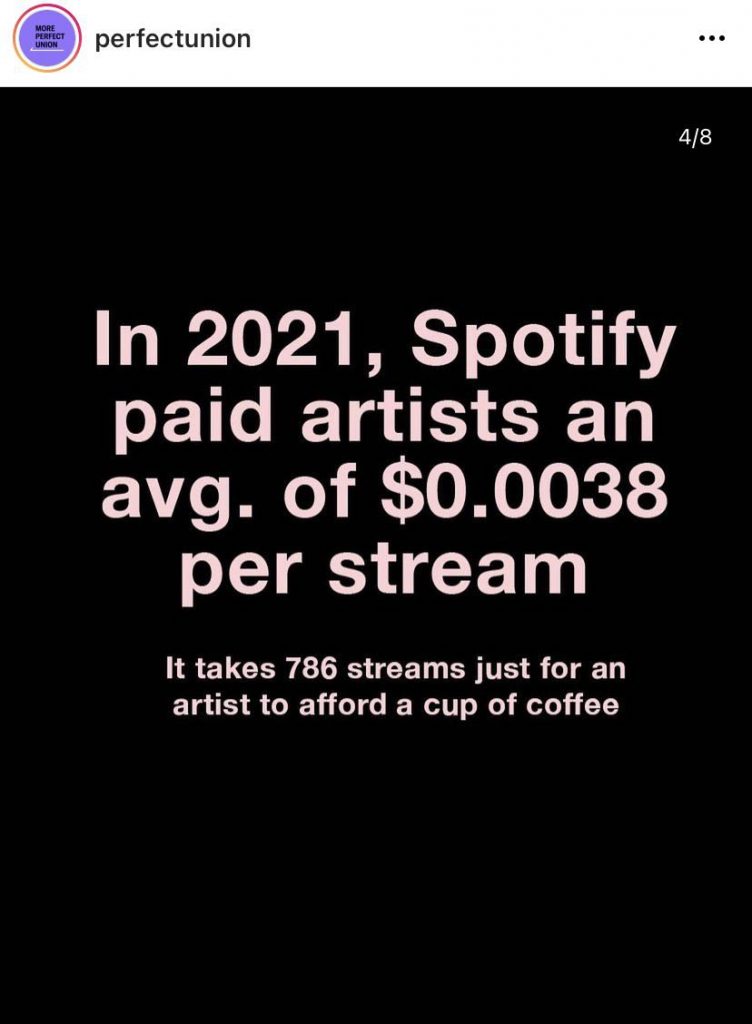 Grappling with these phenomena means acknowledging the contemporary parameters that define and shape the meanings of culture, as well as the labor relations and power dynamics that transpire in the (inescapable) platform environment. Luckily and thanks to digital platforms that disrupt the spatial and temporal requirements of presence and attendance, this talk is still available to be seen on this link.