“I never thought I’ll be a refugee,” a colleague wrote in a Facebook group chat. Me neither. While the Ukrainian army and citizens bravely defend my homeland, I write this diary from Berlin. I check if my friends in Kyiv are fine by the green circle in the Facebook chat or through the “last seen” notification in Telegram. I can’t find the right words, emojis or stickers on how to respond to the incoming news. It’s hard to recall which day is it today and seems like a nightmare that must break at any moment. I’m in shock here in the safety of Berlin and can’t even imagine the feeling of people who stayed.

I visited my friends Vika and Oleg. We spoke about a possible war and they told me about their worries. We agreed that we didn’t expect war to be possible nowadays because we know the history. After the horrors of WW2 we were sure that it would be impossible to repeat human history.  Then they showed me an app called SkyRadar for tracking the sky. We caught an odd drone from Sicily and concluded that it was a monitoring mission to check the situation from above.

Today I tracked a police helicopter above the street where I’ve been walking. I felt like I was in a dystopian movie.

I ordered a backpack suitable for a laptop, documents and some clothes. I didn’t want to leave Lviv but I thought it was better to have a proper bag.
Black ribbons appeared on our national flag that day. 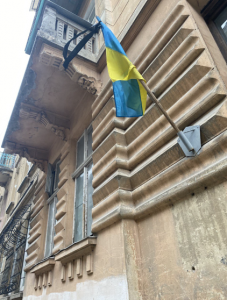 I use Twitter as a notebook of funny phrases and almost don’t read the feed. But that day, I found out the post of the channel calls “Translate it, dude” (like an urban dictionary) with the following term:

Screenshot from Twitter: False flag – is an act committed with the intent of disguising the actual source of responsibility and pinning the blame on another party.

I had supper with Sofia in the Jewish restaurant called Jerusalem, located near the Russian council in Lviv. When we came out, Sofia smelled the smoke of paper. Then we saw that something was burning on their territory:

Sofia concluded that they might burn papers: visas and other documents. We kept talking about what it could be, and if our suspision was true, we figured that things weren’t great. We went over the district, and I proposed to recheck the council. This time we saw a bonfire in the yard behind the fence. Three or four men stood around the fire. I took a camera, made a video of that scary performance, and immediately sent it to my colleagues in private chat. My colleague asked permission to spread this video on Twitter. I agreed. We started joking with Sofia about what we had just seen and laughed aloud, but our laugh was hysterical, not fun. We were scared of reading that sign. The same fire was in Odessa council that evening. Twenty minutes later on Instagram President Volodymyr Zelensky launched a mobilization. I asked Sofia to stay with me that night.

We bought a ticket for Saturday. My colleague told me that a twitter-account of a person who published that video was banned because Russian bots started to attack her account. February 23 is celebrated in Russia as the day of the Soviet Army–and the annexation of Crimea happened on February 20, 2014, including the occupation of the Donbass region. There were some observations about Putin’s admiration of commemorates.

06:24 A phone call from the Kharkiv region:
— Yes, dad.
— They are bombing the nearest town to us. We heard an explosion, but far away.

It was the first time I noticed that news was spreading faster via phone and private messages than through mass media.

Telegram messenger, Lviv <-> Kharkiv region
10:26 Karyna: How are you? I read there is “Smerch” (a heavy multiple rocket launcher)  in Kharkiv.
10:27 Father: Here it is calm. We stored up food. Going to stay here. Maybe you can go to Poland somehow?
10:28 Karyna: I’ll check. The first day is the most panic.

The atmosphere on the street was extremely nervous. There were two things most people did: buying food and talking about evacuation. We met with my neighbor Regina, she told me that she bought tickets to Warsaw for today, and I asked her to book tickets on the same bus. Then we checked the basement in our building, bought some food with a long expiry term and water.

Telegram messenger, Lviv <-> Kharkiv
12:22 Karyna: Have you found bomb shelter in your building?
12:22 Father: There is no bomb shelter inside. Your aunt will go and check the nearest other option.

My mother, father and elder sister were in the Kharkiv region these days because my mother had to go immediately to take care of my grandmother, who had serious sequelae after COVID. They are taking turns with my aunt, but my aunt has broken an arm recently, and my grandmother is bedridden. I repeatedly asked my father to take grandma and grandpa to Kyiv because of the critical situation on the borders, but they deferred the issue in the hope that it would cease to exist.

Facebook Messenger (group chat), Kyiv <-> Lviv
Yana: KMDA published to go to the shelters in basements.
Olena: I’m riding 5km/h. There is smoke and air fighters above me… 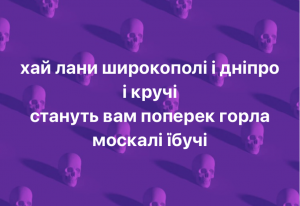 Facebook post:
let the deer and broad fields
and the Dnieper with his cliffs
stands across your throat
fucking moscals 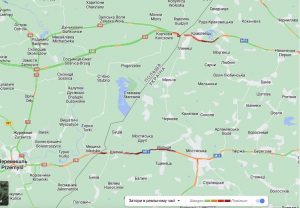 Google maps: 17:53 the border between Poland and Ukraine

I still thought that the fire would end, and I still couldn’t accept the reality.
During all those years of war on Donbas, Russian propaganda and their troops on borders, the status of war became a new normality. Everyone was taking Putin as a bogeyman, despite all those messages and narratives of Ukraine that our researchers have identified all those years. https://imi.org.ua/en/books/pro-russian-and-anti-western-conspiracy-theories-of-information-war-i39874

When I got to the bus, I called my mom, and she told me that they were going to escape from the Kharkiv region because my father concluded that Russian troops could blockade the area. Ukraine was on fire, and the road was long and dangerous for them. They had to leave my mother’s parents, with the possibility of running out of food and medicaments for those who stayed.

During my phone call with mom the girl who sat near me – Masha from Kyiv-, listened to my conversation quietly and then in the end when I burst into tears she hugged me and told me that the most important thing for me now is to keep calm and support my relatives in a good spirit.

The bus was full of people, and there were dominantly youths. It may sound weird, but I saw how privileged I was becoming a refugee and being a woman. When we came closer to the border, the bus driver announced that all men aged 18-60 won’t cross the border because of the military regime. After a while, the only adult man in our bus remains the bus driver.

Our route took 17 hours instead of 8.  Everyone on the bus was in contact with their relatives or friends who stayed in the country. My parents and elder sister started escaping from the Kharkiv region by car. There were lines for the fuel already, and a friend who fled Kyiv stood in line for several hours to fill the gas tank.

When we came to the Polish border, the guards didn’t ask any questions. Conditions of the border crossing were straightforward. Many of my stereotypes about refugees and international assistance were broken that day. Since the Revolution of Dignity, I witnessed how people can unite and help each other inside Ukraine, but it was the first time I saw it internationally.

Ukrainian mobile operators made free-roaming and the internet for all Ukrainians. I kept in touch with Anton, who was waiting for me in Berlin and relatives in Ukraine. My parents were glad that I escaped, but I felt mixed emotions because the atrocities in my homeland had continued: I felt the guilt of being secured while others were in danger.

We arrived Warsaw at 16:47. Marta, a friend of Regina’s, met us at the bus station. Anton also took a ticket from Berlin to Warsaw to meet me there and stay there for the night. I saw a Ukrainian flag with a world of solidarity on the city screens.

I keep in touch with my relatives, friends and colleagues by Telegram, Facebook and Instagram. It was so strange to see  the war-insta-stories in between Insta beauty commercials or other stuff not dedicated to what is going on in my country. More than 40 million peaceful people were brutally attacked by Russia, and I can’t define it as war anymore, it is a genocide.

Me and Anton were chained to our devices. We’ve been watching the news, communicating with others in web. My parents and sister have got to Lviv, and I had a phone call with them. Dad told me they saw Ukrainian army troops with different anti-tank weapons and said he saw the Starlinkin the sky, and it was beautiful. All the days blend into one.

More than a hundred thousand people in Berlin came to support Ukraine that day. It wasn’t a joyful parade. People demanded strict action from those politicians and governments to whom they delegated power: switching RF from SWIFT and closing the sky. My wish was to bring murderers to responsibility: Putin, Lavrov, Zakharova, Solovijov and many other regime servants should be judged. 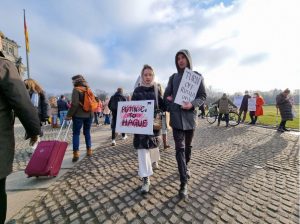 I thought a lot about the Kremlin’s propaganda. Of all the horrible consequences it brings to my home. The first war prisoners-of-war started to appear in my channels: they were 18-20 years old, and they told cameras that they didn’t know where and why they were coming. I don’t feel any comparison to them, but I’m overwhelmed by the scale of the Kremlin’s lies. People for them are just cannon fodder.

I hardly define what day of the week is today. Everything smashed in one perpetual nightmare. But Ukrainians bravely define their homeland. We don’t give up. Because we are free, we are strong, capable of uniting and defending the truth.