I thought it’s just me, but Asia says she is losing sense of what day it is. I feel the same, not all the time, but some moments, definitely. Writing stops, only fragmented notes are made, but I will now bring them together by reminding myself what I wrote to Asia one of these mornings: It is important to clearly mark dates and reflect on how things change. Reflect, analyze, structure this flow. So, here we go. 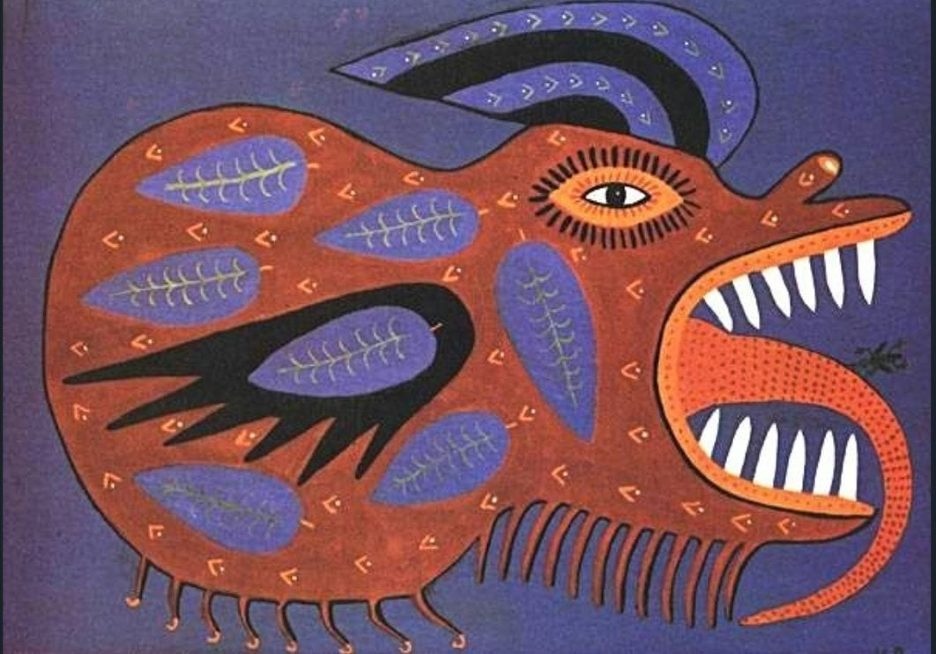 The war tension oscillates between two poles these seven days – AI and nuclear. An educational message received via several Telegram channels on March 3rd explains to the broad audiences what a deepfake is. In case this method of disinformation is used, the channel proactively informs users, they could see a video where Zelensky announces a full capitulation or asks to surrender. Despite how realistic it might be, it is a deepfake. They asked and I had to go through this with my 80/85 year-old parents, slowly and in simple words unpacking the nuances, complexity and danger of this technology so that such videos do not fall on them like an information bomb. But then we talk about the war and after giving me a short news update, I realize they might not always distinguish between Ukrainian and Russian TV brought to their screen by a random click, they are confused, overwhelmed, and their reality is a convergence of two absolutely conflicting narratives: if this is not a deepfake, I do not know what is.

Since the end of February, still before the war, there have been attempts to envision various possibilities of engaging AI in the current Russia-Ukraine cyberwar. During and after the Maidan, fake Facebook profiles spread disinformation using online stock photos; now such profile pictures are generated by AI. Interesting, why was AI engaged for such a mundane task? Is it anything about these faces? Are they made particularly trustworthy? Do they appeal to some social groups? To some media audiences? Many questions arise. Still, the major use of AI in this war seems related to decision-making, where Al serves as a tool “that collects and analyzes data,” including data collected by drones, “parses it out and gives the most optimal outcome to help make tactical decisions.”

A graphic summary of the nuclear theme by Charlie Hebdo says it all. But cyberwar is “thermonuclear” not only because of the tactical raising stakes as it crawls closer to nuclear weapons (for instance, as it happened during the Operation Olympic Games when the United States and Israel manufactured a state-of-the-art malicious computer worm Stuxnet to disrupt Iranian nuclear facilities), but also due to its ability to turn other objects into nuclear weapons. This is what occurs when missiles hit the site of a radioactive waste disposal facility in Kyiv; or when an inactive Chernobyl Nuclear Power plant that cannot be abandoned without daily routine operations is in danger because the personnel of the plant are taken as hostages by the Russian troops and they have been working their shift for already ten days, split in two groups, exhausted and with a limited supply of food and medication; or when the line of combat is drawn through Zaporizhzhia with 6 active reactors of the local NPP, currently the largest in Europe. The column of Russian heavy military machinery entered the territory of a nuclear power plant in Energodar, a satellite town of Zaporizhzhia NPP; at 11:03pm on March 3rd, Energoatom’s telegram reports a visible rocket strike in the industrial zone. A fire breaks out at a training building outside the NPP around midnight as a result of the continuous shelling of its buildings and units; then, at 6:20am on March 4th, it is extinguished after continuously burning for at least four hours throughout early Friday morning. The radiation level has not changed. The NPP is now under control of the invader. Envisioning a scenario of a hypothetical accident, the Norwegian Radiation and Nuclear Safety Authority (DSA) has been modeling the speed and scope of pollution dissemination in the framework of the meteorological prognosis for the following three days. And this is a telling point of meeting between AI and nuclear.

Another dimension of cyberwar unfolds as a battle of cybergroups. On February 28th, a Medium post reported a list that includes information about different groups’ alliances (Ukraine / Russia / unknown), types of attacks (DDoS / hack / data breach / ransomware), platforms (mostly, Twitter), potential location (West Europe / global / Russia / Belarus / Georgia / Ukraine / unknown), and the day they started the activity (2020 to February 2022). The internet in our Khmelnytsky region and especially in my town has slowed down incredibly. People are often hacked, possibly, via WiFi. My IP address, along with my neighbours’ phones and computers, were hacked two days ago, and we moved to mobile internet. Zoom and Skype were down, my media comments and interviews all fell through yesterday.

I am writing this fragment on March 1st in the basement where we are hiding from potential rocket strikes. This is the fourth siren that has gone off today. Often the three of us – my neighbours from Kyiv and Chernihiv and I – are alone here, while other neighbours remain in their apartments. The town has not been hit yet. So people are really giving up on running downstairs “for nothing.” Some nights I turn off a siren alarm on my phone, yes, there is an app for that, because I need sleep. Before I got this app, I was receiving air raid alarms by Telegram, because despite all the additional sirens installed in town, I still could not hear them in my apartment. Neither do my parents at their place. I watch my Telegram, and when I get a warning message, I call my mother, so she and my father can get to the safe room without windows (in the end, they cannot make it to the basement each time, although my father has prepared it for the worst case); and after I make this call, I run downstairs with my emergency backpack. On the one hand, I consider stopping these sprints downstairs to save energy; on the other, I feel like it might be important to embrace this war regime completely, install it in the body, for safety reasons.

The basement where we hide is very small. Perhaps 1.5 x 4 meters. It is all concrete. I bought thick styrofoam and my neighbour covered the floor and put some near the walls to lean against when you sit on the floor. As a shelter, it is shitty. One entrance, no real ventilation, and provided how this building is built – bricks and sand – a small hit would probably collapse it like a house of cards. Each time when I find myself there, I make a note to myself that I still do not believe our town will be hit.

I’ve been thinking about the logic of these air raid sirens. We are told the automatic system reads the space of the entire Ukraine and identifies the trajectory of a potential rocket flight, then the alert goes off in all cities and towns in its way. In moments like this, we are probably all united by the flight of the rocket, with most of us probably sharing the same affect. This is a profoundly cybernetic event of control and communication in the animal and the machine: an intermixing of complex heterogenous systems at a huge scale. 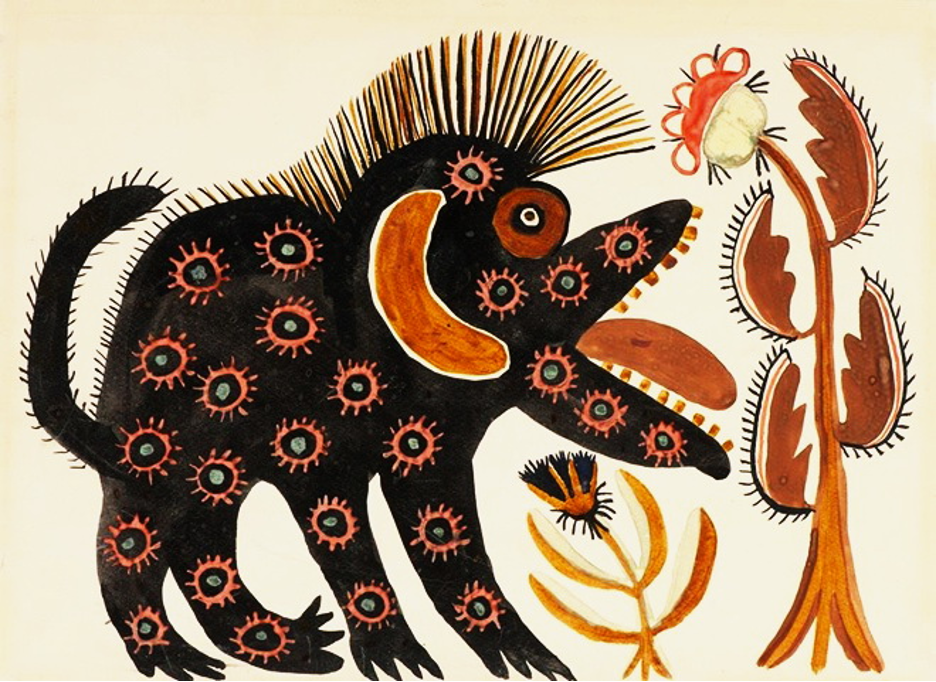 On February 28th, it was reported that 25 works of Ukrainian naive artist Maria Prymachenko were burned, when Russian forces attacked Ivankiv – another horrible loss on a list of many losses of exquisite masterpieces of architecture, monumental sculpture, museums, and more. Born in 1908 in Bolotnia village, now in the Chernobyl Zone, Prymachenko witnessed two World Wars and the nuclear colonialism of the Soviet Union with the Chernobyl catastrophe as its crowning event. But then it was reported that a local man ran into the burning museum in Ivankiv to save them. And he did.

Asia calls. Having escaped Kyiv after two first days of war to her hometown, she is hesitant whether she needs to run again. “My home – your home.” But the escape routes are the problem now. Escape routes and transportation. As well as logistics and companions. So, she does not know. When I read the current numbers of people leaving the country to become refugees, I think the reality is now best measured by this statistic.

But we all know how it will end. P., who climbed to power by stepping on the dead during the First Russian-Chechen war, staging the explosions that hit civilian apartment buildings in the Russian cities in September 1999, who stayed in power by boosting his popularity during the Second Russian-Chechen war, the Russia-Georgia war, the annexation of Crimea, the war in Syria, and many other acts of aggression, including what his regime has done to his own country, will fall from the huge monument of flesh and blood he has been building for himself for twenty three years, during his last war, of which this is the tenth day.