Everything that I write is unacceptable for Ukrainians now, our problems are not commensurate with the victims of bombings and blockades. But we in Russia must develop resistance tactics, as well as mentally and socially survive.

The war was a shock for us, as it was for many. The blackmail and repression over the past years since 2012 and especially since 2014 has continued to rise. 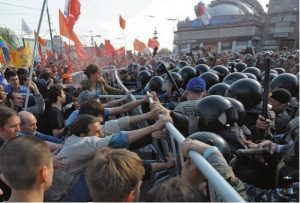 The history of repression is that invisible part of politics that can explain where everything comes from.

We can get any Ukrainian channels and opposition channels with political discussions. They are available thanks to VPN. I, like many people, use the Dutch Proton VPN. Many thanks to them, they massively opened up access and I hope they can technically withstand millions (?) of Russian users. 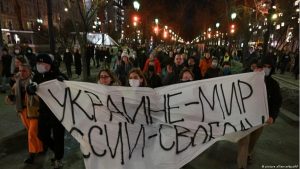 1st day of the war https://www.dw.com/ru/kak-molodezh-v-rossii-ubezhdaet-roditeley-ne-podderzhivat-voynu/a-61018360

The first week we held demonstrations and protests on the streets. More than 5,000 people were arrested, but now it is not possible to gather in one place for a picture. The criminalization of protest marks a new low; after it was introduced that any picket statement can last just a few seconds, the police still do not shoot at citizens, although the corresponding law has already been adopted. 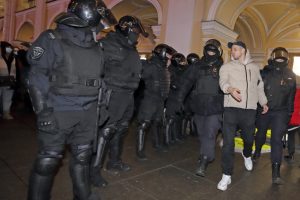 The idea that a million people on the streets can change something has not been confirmed either in Belarus or in Russia over the past 10 years. This is the question of repressive apparatuses. How do apparatuses of suppression work in the era of media, social networks and Covid? And how can networks of resistance be rearranged? It is very possible that refugee visas will be needed soon in case of shootings and mass torture (like in Belarus). Russian students stayed in Utrecht, I know that the university fought for them. Some students are activists, here they would be under arrest.

There is two step procedure: two “administrative arrests” on the street within 15 days, then 15 years. They have already adopted a law for the criminalization of street protests. IT and public activists left for the neighboring post-Soviet countries of Georgia, Kazakhstan, Armenia and Kyrgyzstan. Some of them were our students. I’m not talking about the rich, they are far from it. 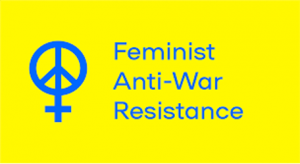 There is a lot of work networking against propaganda: helping with an urgent departure; we have networks of lawyers who accompany arrested activists; prisoners-info (OVD-info, Apology lowers); Feminist Anti-War Resistance is very active in 40-50 Russian cities. There is an acute phase of civil war between social networking and administrative power, which is generally against any networking. We have a lot of crypto-channels for practical work. FB, Instagram are blocked, big media too, but Telegram channels have hundreds of thousands of participants with news aggregators from subscribers. Anti-war YouTube vlogger Yuri Dud has 20 million views. Just in case, people renovated some BBS protocols. Many media groups produced email news lists, like in 1990.

The militaristic dictionary about the confrontation between Russians and Ukrainians, about the Nazis, is an ideological trap. Russian-Ukrainians oppose  traps that aim to cover up the self-preservation of the elites, and to fool people who do not have educational and cultural resources. They made culture and science an inaccessible luxury, and for many people there is only one social elevator – a military mercenary. Now the most vulnerable group are the mothers of dead and captured soldiers, they are being blackmailed, threatened; I’m afraid they can be imprisoned. Groups of volunteers and soldiers’ mothers organizations are working to help deserters leave for third countries. If they return, they face prison; if they go over to the side of Ukraine, their relatives will suffer.

There is a strange statistic that supposedly 68% of people are for the war, especially the elderly. Older people see everything, but they cannot cognitively and psychologically accept that their anti-war education, their upbringing after the Second World War, turned out to be militarism and aggression against part of their own families in Ukraine. This is not true, many refuse to participate, anonymity is questionable and the questions themselves suggest a frame for the answer. It’s like giving them a gun and forcing them to kill their neighbors. Our power elite first created economic subjugation, then the destruction of meaning, now it inflicts psychic trauma and wildly bombs the people of a neighboring country. They hope to crush their own citizens not only economically, but also mentally.

It is a military coup, but what is logic and causality of that? We continue to teach as before in alternative schools, but large state universities have introduced severe censorship. There is a lot of psychological work and some discussion groups to rethink post-Soviet history with students, friends and relatives. Many young people are in a deep depression because to be a part of country-aggressor is a severe trauma of guilt and shame. And their future hopes are being taken away. They discuss partisan tactics, I persuade them to think first of strategies and theories. They also learn not to immediately blame relatives (who are afraid to accept the new reality) and to give them time to accept the collapse of values and meaning. Many psychologists and psychotherapists work for free or for donations, they are waiting for the growth of clinical psychopathologies.

As for the underlying reasons, it is a consequence of the global neoliberal experiment to transfer the scientific and technical economy into a resource economy ‘oil needle’. The beneficiaries are a small elite who has been at war with its society for 20 years and escalates institutes of internal repression and violence because of ‘economic parasites’ – consumers who should not have independence, education, initiatives. For many people, the accusation that ‘folk’ created Putin is strange (this is the thesis of the Moscow ‘liberal’ propaganda of the 2000s), they fought him for many years and considered that he was held in power by world elites, like the oligarchs of the Forbes lists. And especially after the scenario in Belarus, they have no choice: either they go to jail or they start a war. And in general, it seems that military coups could be the mainstream of modern history of the 21st century. But I hope that after this war, social care and safety will be the main political orientation of global political economy instead of economic competition, conspicuous consumption and financial offshoring.