Dear friends and colleagues, I want to write important thoughts for me.

It is very difficult for me to talk about culture and art at a time when war is going on. The official Russian authorities call what is happening in Ukraine “a special military operation by Russian servicemen to protect Ukraine from militarization and nationalism. The word “war” is forbidden in the Russian press. Radio stations and the press, which criticize the official news and tell the truth, are shut down. Anti-war rallies are held in major Russian cities. The police act harshly. More than 6,000 people have been arrested. Russian society is now torn apart.

The older generation of Russians, people who are now over 70 years old, are at the mercy of television propaganda.  This is already leading to family tragedies. Relatives are cursing each other. It just blows up families! We understand that this is the way the Empire that was built over many years is collapsing. And we are witnesses and participants in this difficult time. We too are responsible for the actions of Putin’s government, even though we never supported or elected him. A lot of people who were civic activists and were afraid for their future left Russia. I don’t condemn them. But I personally have no intention of leaving St. Petersburg. This is my homeland and my favorite city, where a lot of thinking and talented people live. And we won’t give this city up to anyone!

What can culture and the arts do today? It seems to me that culture and the arts are the only hope that can help us get out of the pit into which we have fallen. The Germans experienced a similar thing after the collapse of the Nazi regime. And they realized that only culture and art could save Germany. And this choice helped them to find new meanings for Germany. At the core of my last American-Russian project is non-conformism. In Russia, its emergence was closely connected not only with the totalitarian political system but also with the ban on the information. Citizens of the Soviet Union were behind the Iron Curtain, they could not freely travel outside of Russia, they could not freely communicate with people from other countries, and they could not read new foreign literature, listen to music, or see exhibitions of contemporary art, or see movies. Russia was living under an information blockade. And it affected her life and the picture of the world.

Today, we once again face the threat of such informational and territorial isolation. And only culture, art, personal human contacts can find a way out for the future of Russia, which we do not yet know, but very much want to see. And I am grateful to everyone for their kind attitude and understanding of the complexity of the situation. Russia will be free! 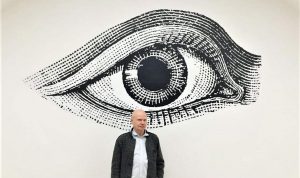