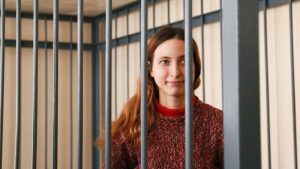 On April 13, a Saint Petersburg court sent the artist/musician to a pre-trial detention center. She faces between 5 and 10 years of imprisonment because, on March 31, she swapped price tags with stickers containing information about the actions of Russian soldiers in Mariupol in the “Perekrestok” supermarket.

She is now accused of distributing fake information about the Russian military according to a new article of the Criminal Code of the Russian Federation, which went into effect on March 4. It carries a sentence of up to 10 years in prison.

Sasha suffers from celiac disease – genetic gluten intolerance or, in other words, wheat and rye protein intolerance. Sasha also has bipolar affective disorder, so any deviations from her daily routine, lack of sleep, and severe stress may cause an exacerbation of the disease.

Aleksey Golovenko, a gastroenterologist, said that the complications and neurological disorders that would arise after several months in the pre-trial detention center will amount to  “awful psychological pressure.”  The current prison regime and rules nearly amount to a death sentence for Sasha.

Please, sign the petition, help us spread this information, and save Sasha!