All Russians are poisoned with their propaganda. The two things they’re outstanding with are stealing and lying. They produce an overwhelming amount of disinformation, distortions, and fakes.

‘No war’ is a famous meaningless statement by Russian self-proclaimed opposition or liberals. The war goes on. The world has known about gathering russian troops near the Ukrainan border since May 2021. Where were all liberals, activists and journalists before Russian troops invaded Ukraine?

Even now they are stealing attention from crucial things like green corridors for civilians in Mariupol LIGHTNING TOPICS LIKE Maria Ovsiannikova, the former editor of the state-owned First Channel. For eight years, she’d been creating content that leads russians to the violence and torture of Ukrainians. She is personally responsible for the crimes in the informational sphere she committed. Still, instead of being judged, she fled to Germany and was hired as a correspondent for the Welt and she’d been honored for their services as fighters for freedom and democracy.

According to Wikipedia, Mariya Ovsyannikova has been working for First channel since 2003, and it was her “dream job”. At the start of the 2000s, after moving to Moscow, she was hired for Channel One Russia’s main evening newscast “Vremya”, thanks to the protection of her husband Igor Ovsyannikov, now a director in Russia Today (another state-owned propaganda channel).

She said in her video message that all responsibility for this war bares only one person – Vladimir Putin. Wait, but why? Choir of them shifted the blame on their president Putin. This war is not the first case of “Putin’s war”, and this is the 13th Russian war in the last 31 years. So the one person of a 140 million population country is responsible for 13 wars, while the others are..?

‘Out of the politics’ is the position of “good Russians”, which comes down to the delegation of their political responsibilities to Putin. It seems like their journalists were also out of politics somewhere in the forests of Unicorn Country. 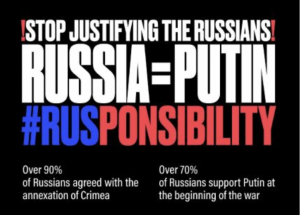 I found a crazy initiative that helps Ukrainians, set up by Russian journalists, writers, activists or whatever… It’s called “True Russia“. Watching their videos, I feel sick of their rhetoric. They invoke to help Ukrainians, but I think the first thing they should do is to help themselves over-think their imperialist mindset and overthrow fascism. The first step to healing is to identify and admit an illness. Being “good Russians” by helping Ukrainian refugees is a bad idea. They should highlight Russian reality, combat propaganda, go to jail and describe what they see there, and even lay down their lives for freedom and stop the list of russian wars in the future.

The Ukrainians need help in winning this war. The Ukrainian army needs an offensive weapon. Ukrainians need a green corridor in Mariupol to save the lives of people. More than 2000 people were killed, according to officials. But how many people are still under destroyed houses and streets? How many of them are still alive and couldn’t get help just because the russian army didn’t let evacuate people from the city. 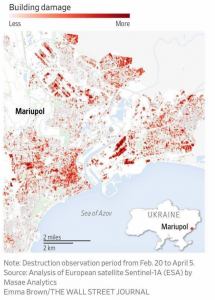 But what about Alexey Navalnyj? Navalnyj has the same emperor mindset politician as Putin. His position on Crimea was clear:

“I think that despite the fact that the Crimea was seized with outrageous violations of all international norms, nevertheless, the realities are such that Crimea is now part of the Russian Federation,” Mr. Navalny added. “So let’s not kid ourselves. And I advise the Ukrainians not to kid themselves, either. It will remain part of Russia and will never become part of Ukraine in the foreseeable future.”

A lot of Russian journalists were applauding the annexation of Crimea. So here we go. Let’s check what Meduza (the popular russian “independent” media) has written about Ukraine in 2014 when the war just started.

This article is absolutely uncritically described TO WHICH WAR RUSSIA PREPARES. I found this article last week, during preparation for this text and I was stunned. They quote Putin’s doctrine of war without making any edits or giving any context, they just copy-pasted the doctrine itself. I recommend reading it in English using a browser translator.

And another prominent example of their independent journalism in their article “Euromaidan, a year after”:

“After Euromaidan, the new Ukraine was at the centre of the largest geopolitical conflict. In March, Crimea left the country – the region was annexed to Russia; in April, a civil war began in the south-east of Ukraine – Donetsk and Luhansk regions demanded “federalization” and then declared independence. The political crisis in Ukraine continues to this day.”

If we recall all russian wars that I mentioned at the beginning of this blog, we’ll see a similar sign: all wars russia has engaged in, started from “civil wars” organized by russia. Ukraine was a peaceful country and the annexation of Crimea and occupation of Donbas was declared previously in russian international political documents.

Making the equivalence between Ukrainian and Russians is a big mistake. We are not a brotherhood nation. We are not the same or even similar. This is another propagandist narrative of russikij mir. We are not brothers and sisters and never were.

For Europeans, who didn’t observe Ukraine-Russian relations it might be hard to understand, but let’s remind ourselves of:

Christopher Kelty: The Internet We Could Have Had

Ten years ago I began writing a book. It was going to be called Power/Sharing and would pick up on my previous book Two Bits: The Cultural Significance of Free Software. It was a turbulent time: the occupy movement, M15 and the indignados movement, the protests in Tunisia and Egypt, protests against legislation called SOPA/PIPA, [...]

OUT NOW – THE PSYCHOLOGY OF THE WEB DEVELOPER, REALITY OF A FEMALE FREELANCER

The Psychology of the Web Developer, Reality of a Female Freelancer By Maisa Imamović Underneath the user interface of any website—be it simple or complex—lurks the web developer’s struggle with money, prestige, and power. An ever-lasting race to the top, never not working. Yet what are these unseen costs of being a traditional web developer, [...]