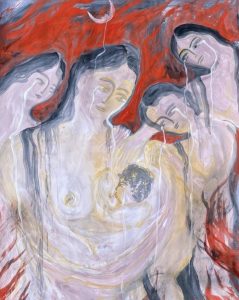 We met around 8, on a Thursday evening[1]. Welcomed by the smell of homemade soup. Courtesy of Mirror Soup Kitchen Lviv. Hackers, artists, researchers, journalists, and passerby’s filled their bellies with the very same soup that’s providing essential sustenance a mere 1.362km away. The very same recipe, cooked on the very same day. It tasted delicious, though a little sad, and warm in many ways.[2]

Marleen Stikker moved towards the front of the crowd. Her words making public what had long been in the making. In late February 2022, a group of like-minded Netherlands-based media specialists came together to support independent tactical media, journalists, newsrooms, and civic initiatives in Ukraine, Belorussia, and Russia. Together they formed the Tactical Media Room.

The word Tactic finds its origin in the modern Latin tactica (17c.), and from the Greek taktike techne, meaning “the art of arrangement”. Specifically pertaining to tactics in war—The order or disposition of an army. The root of the word comes from “to touch, or to handle’.

But it is more than the mere weaponization of media.
There is an inherent shift—Relations change in reverberation
A move from being subjected to media to becoming its very object.

One of the things Marleen says stays with me particularly. “TMR is not a collective of organizations. It’s a coming together of individuals that bring a network.”
A web of nodes with a collective urgent agency.[3]

Kristina Petrasova welcomes Alexander Gubsky and Ilya Shcharbitski to the stage. Respectively the publisher of The Moscow Times, and a civil activist and spokesperson of the Belarusian opposition movement in The Netherlands.

We talk about changing perceptions, in Ukraine, but also in Belarus and Russia.  We discept some of the strategies of Putin’s dictatorship and chokehold on information.
We discuss the many lives subjected to the echo of words and formulas dictated by the Russian state.
And how somehow     Lie + lie + lie + lie + lie    equals      a thick vacuum
Of rigidly controlled public space

Our brief guide through the disturbing (dis)information landscape is followed by a positive forward-looking announcement. Ellen Rutten presents the University of New Europe. She and many colleagues with her recognize a lack of equality and educational standards in Europe for its citizens and refugees and want to raise funds to be able to train disadvantaged students, with a special focus on those parts of Europe where intellectual freedom is at risk. They aim to fill the gap created by political repressions against the leading East-European institutions of higher learning. Find out more about the initiative here; https://neweurope.university.

We settle deeper into our subject.

В озере лжи много мертвой рыбы
In the lake of lies, there are many dead fish[4]

Boris Noordenbos takes to the stage. He spearheads a discussion on the role of historical narratives and conspiracies in Russian Propaganda.

I think along with Sylvia Wynter,
Who once so eloquently explained the power of narration,[5]
We humans are a unique alchemical storytelling species: the stories we tell literally transform us both physically, genetically, and socially.

It’s funny, Haraway taught me to love SF[6]
But they completely destroy it.

I’m reminded of an article by Elvia Wilk in Artforum on Ecosystemic Fiction.[7]
“Fake news creates real news”. Alluding to the power of fiction to intervene in reality. In the current political climate, there is barely a needle-pin gap between conspiracy theory and state policy.

We’re stuck in a downward spiral of self-fulfilling prophecies from hell.
A fictional turned non-fictional land where the global L.G.B.T.Q. movement is a plot against Russia, Ukraine is preparing bioweapons and the West is eagerly scheming to carve up Russia’s territory. All the while Hollywood is working hard to produce the scenes used to discredit Russia. [8]

These battles of words are shedding real blood.

We live in a conspiratorial reality, where fiction is being utilized as an ideological vessel.[9] Always a generation behind reality.

We must reconnect what words have separated.

I just don’t know how
Instead, I offer a quote from Etel Adnan[10]

Writing that requiem I had to hear the representative of those humans who claim that they are tired of the world’s situation and that they will be looking for a new Revelation. But the choir kept telling them that Revelation is indivisible. It’s one. It’s very likely what was meant by Nietzsche when he mentioned, the eternal return of the same.

Looking to ways to offer help nearby? Have a look here: https://www.inzamelplekkenoekraine.nl, an initiative by Michael Del Pino.