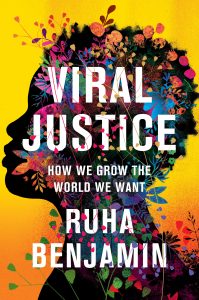 With grace, eloquence and wisdom, Ruha Benjamin recently presented her book “Viral Justice – How we Grow the World we Want”  in Amsterdam. As a Research Masters student at the University of Amsterdam and on behalf of the INC, I  attended two of her events, both at SPUI 25 and the Institute of Advanced Study. Benjamin began her speeches with the words of the Black radical world changers who came before her:

All that you touch,

All that you Change,

Benjamin’s command of her craft stood out; as a true teacher, she took on complicated social relations, marred by decades of strife, pain and suffering, and explained how we can identify what we want to change, and then put a language on it, in order to grow the world we want.

Benjamin discussed her book in its early theorisations as part memoir, part manifesto. The book masterfully balances heart-(wrenching/warming) accounts of her youth, with calls for justice, social change and radical love, and how this conversation necessitates a reflection of the role of academic writing. Benjamin advocates for storytelling as not only a means of sharing but also as a form of knowledge production, moving towards legitimizing the format in the academic canon.

When discussing two studies, linked here, and here, Benjamin stresses that, even in the face of well-respected, established social data that clearly indicates racist bias, the majority of the people to whom the data was presented were still not moved to advocate for any real change. She states how ‘we can’t just produce data, and hope that’s going to change people, or lead to certain changes and outcomes, so narrative story, culture, all of that matters, not just as framings, but as generating meaning and knowledge about the world.’

She flips the script for us, as participators, publishers, researchers, and academics, calling on us to reflect critically on how we enact social change in the field of anti-racism.

‘When we’re talking about interdisciplinary methods, oftentimes around technology, we are looking at the onus of the responsibility of those in stem,  the people who are producing the data technologies, but the humanities, and the social sciences, but the danger of the stories that are told and that tell out of our fields, about history, about sociality, it’s partly about our own complicity in producing the problems. […] It’s not just a problem for those on that side of campus, we are also responsible for generating the kind of meaning and knowledge that is creating these distorting lenses, it’s not just a data problem, it’s a story problem.’

To bring this back home, when we consider anti-black and other forms of racism within the European context, there is no shortage of case studies that we may draw upon. Co-speaker Dr Ghebreab spoke about the treatment of Black Refugees and the racist and classist roots that arose from the recent Childcare crisis in The Netherlands. It, clearly, is up to us as participants in this drastically flawed society to follow Benjamin’s lead, interrogate the world we have inherited and challenge the biases ingrained in our systems, thus making a case for change.

The work of the INC is far-reaching and varied, but a core value has always been the power of urgent publishing. Working hand in hand with academics, artists and students, we strive for a strong combination of theory and practice in advocating for social change and justice. Through the medium of urgent publishing, we practice resistance as it lies in challenging traditional channels of knowledge production, giving a platform for people to share their stories and facilitating urgent publishing as situated practice (find our most recent publications (free to download) linked here).

Similarly, on the topic of sharing; find linked below a few collectives, organizations and advocacy groups working on the ground here in Amsterdam.

Leaving both talks with Benjamin, my friends and I were all struck by her advocacy. Some of my companions commented on her passion as a researcher, teacher and activist, the undivided care and attention she gave to each audience question, her wisdom and humility palpable. Yet what stood out most, to me, was undoubtedly her presence; standing strong and passionate in her activism, she embodied a model of change, a true inspiration. It was an honor to attend her talks, and I highly recommend and urge anyone reading this to engage with her works, so that we can all challenge the world together.

Boost facilitates interaction and cooperation between local residents and refugees as a means toward a fully-fledged position for refugees in Dutch. The foundation organizes, amongst other things, housing, meeting places, language classes, courses, dialogues and start-ups, all of which are focused on inclusive integration. The Foundation also researches and develops concepts for local civic integration and an inclusive society. 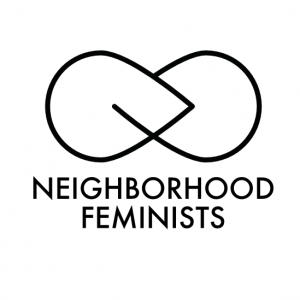 Neighbourhood Feminists is an anti-racist community based collective that organizes local, direct-impact projects to make a tangible difference on the ground in Amsterdam. They focus on issues of period poverty, as well as fostering community solidarity, human dignity and bringing opportunities to women of color and other marginalized groups.

DATACTIVE is a research project and a research collective exploring the politics of big data. As a collective they experience engaged research as an approach to research that aims to make a difference for groups and individuals, while privileging systemic, evidence based, social science research as well as a grassroots perspective.

This blog post was written by Jasmin Leech, a research master’s student in the department of Media Studies at the University of Amsterdam and a Digital Publishing intern at the Institute of Network Cultures at the Hogeschool van Amsterdam. With a bachelors in Media and Philosophy, their research interests lie in digital development of epistemologies, digital post-humanism and post-colonial theory. This year they write their thesis concerning datafication, mediation and emotion.