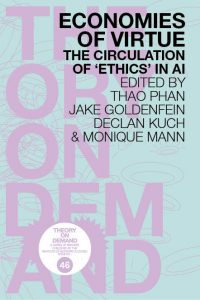 Economies of Virtue: The Circulation of ‘Ethics’ in AI

AI ethics has never been far from the industries it sought to critique. While originally designed to bring values such as fairness, accountability and transparency to Big Tech and its products, the lines between Big Tech’s PR initiatives and AI ethics funding has never been clear. In practice, AI ethics now operates as a means for the co-option of critics and to enable regulatory capture. It is used by corporations to create legitimacy and to further accumulate value. The result is that ‘ethics’ has now become a high-valued industrial commodity, and AI ethics its foundry.

This anthology is a collective response to the reification of ethics into commodity forms. It explores how industry participation in ‘ethical AI’ research has created a new ‘economy of virtue’—a massive network of actors variously situated across industry, civil society, and universities, producing and circulating ethics as a service and a product. The contributors present both critical perspectives and first-hand experiences of this economy. They address a wide range of topics including: the contradictions and personal dilemmas of working in industry-funded spaces; case studies of AI ethics in domains such as defence, facial recognition, and standards setting; critical assessments of techniques like green-washing and the manufacture of trust; and the risks and practicalities of direct action such as speaking up, organizing against and dropping out. Together, these contributions give voice to the intractable problems of co-option, capture, and complicity that plague AI ethics, and give shape to the networks and circulations defining the field.