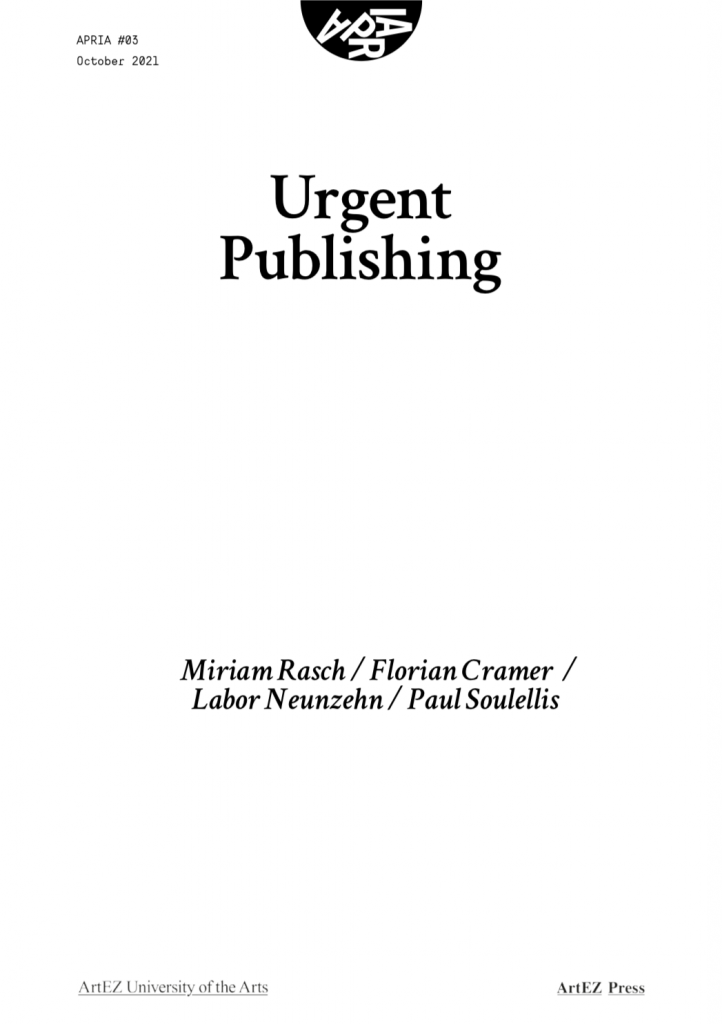 Edited by Miriam Rasch and Nishant Shah.
With contributions from Florian Cramer, Labor Neunzehn, Miriam Rasch and Paul Soulellis.
Published by ArtEZ Press and APRIA: ArtEZ Platform for Research Interventions of the Arts.

Publishing can be a slow business—frustratingly so when you want to participate in societal debates that evolve ever faster. That’s especially the case when you want to elevate such debates with high-quality materials—well-researched, well-designed, sustainable publications. It gets even more tantalising when you’re after a public outside your own (academic) bubble and want to build critical and communal audiences. In the project Making Public, these experiences and ambitions were the starting point for two years of experimentations and conceptualising around the notion of ‘urgent publishing.’ Over the course of the project, our thinking about time in the publishing process shifted from an understanding of urgency as a business asset into one referring primarily to ethical context.

How can a different approach to the timeframes or tempo of publishing help in building relevant publics for content? In the language of the research question: How to achieve an optimal balance between the speed, quality and positioning of a publishing project? In a media and publishing sphere dominated by breaking news, hype cycles and metrics, how do you keep up your quality standards and care for your publics, while also being part of ongoing societal debates? How can publishing in this context be a tool for critical community building?

Funded by Regieorgaan SIA, the Making Public project ran from 2018-2020 and brought together more than a dozen partners from education and research, publishing, design, and development.

It led to an exploration of the concept of ‘urgent publishing’—which of course has to do with time and speed, but first and foremost views publishing through the lens of urgency, thus asking: Who is your relevant audience? Why do you publish (why now, in this form and for whom?)? What is your publishing doing? How can such urgent publishing be an act of sharing, collaborating, commoning, and care?

The research was most of all practical and experimental, so it was carried out through the making of publications and prototypes. The project resulted in three prototypes, each addressing a different aspect of urgent publishing. One focussed on the need for mutual support among small (online) publishers through the development of a semi-automated tool for sharing content across platforms. Another prototype aimed to involve readers in unearthing content in the publishing archives of periodicals, thus prolonging the ‘afterlife’ of publications, making content relevant again in new contexts. And finally, a manual was developed for editing non-linear narrative, which allows for less directive or steering storytelling, translating urgency to the conceptual level of narrative ordering.

Great care was put into the publishing of the results of the project itself, which, true to the rationale of urgent publishing, were disseminated in different formats and for different publics. The final publication came out in paperback form (and open access, of course) but was first published as a weekly newsletter. This way we aimed to build an intimate connection to the audience by coming straight to their inbox and by using time in a different way than usual. After signing up, the readers would receive one chapter per week, thus stimulating a non-hasty approach to the content and its promotion, while at the same time benefiting from a stretched-out momentum for the project.

A more formal experimentation was undertaken with the special issue of the Pervasive Labour Union zine, which gathered materials around the Urgent Publishing conference that took place May 15-17, 2019. Online video documentation of that event is also available. This APRIA special issue brings together peer-reviewed articles that dive deeper into the question of what urgent publishing might be and do and is the result of a reflective process that took place after the project was officially finished in 2020.

In order to answer the question of what urgent publishing is in theory and practice, Florian Cramer makes a comparison of two highly popular contemporary ‘urgent publishers’ who deal with societal debate and critique: the author and YouTuber Jordan Peterson and Natalie Wynn of the ContraPoints YouTube channel. The two could not be more opposed ideologically, yet at the same time, both understand how to operate in the digital sphere, unlike many others. This digital sphere most of all values that which can be memed. So even though Peterson and Wynn distribute long-form, information-heavy online content that demands time and attention from the audience, they are also attuned to the fast and furious meme-sphere. And while academics work for years on writing the books that counter falsehoods in Peterson’s rendition of theory, his hours-long videos can be uploaded and shared within an instant.

Cramer identifies five characteristics that are on display here: ‘speed, reach, tapping into existing subcultures, partisanship, meme-ability.’ If Jordan Peterson and Natalie Wynn both serve as examples of urgent publishing—which also goes to show that urgency in itself isn’t restricted to one side of the public debate—there might be something that can be learned about why traditional publishing seems so non-urgent: ‘The non-urgency of a publication can perhaps best be defined as a situation in which the urgency for the creator is not the same as for the reader; where, in other words, no communal urgency defines a publication and the act of publishing.’

In his contribution, Paul Soulellis goes deep into urgent publishing as artistic practice, and, more importantly, as communal practice. It is a lecture delivered on different occasions, most recently at the Contemporary Artists’ Book Conference in New York. In this sense, it may be regarded as a form playing with urgency itself. Soulellis argues that urgent publishing should also be seen in an artistic context as primarily a tool for and of community building. Publishing is a political act and without political or communal urgency; there is no urgent publishing to speak of. He discusses different historical examples of activist publishing that took on many different forms to establish an urgent publishing tradition that we can learn from in our current times of crises and political upheaval.

Soulellis highlights how the publishing and distribution process was part of these examples of community building, even though this has often been left aside in analyses or in artistic valuations. Soulellis makes clear that urgent publishing has always been about building community, about mutual aid within a highly political context. Even if it functions strongly within capitalism, it is also empowering: ‘Because while publishing can most certainly be a tool of the oppressor, the ability to circulate stories and information in public space is also one of the superpowers of the underserved.’

In that way, urgent publishing is not primarily about making a product, but should be seen as a possibility for intervention. It is not just documentation, but often a starting point, just as The Combahee River Collective’s Barbara Smith’s way of ‘photocopying of the radical text and delivering it in person—“coming prepared” to a new audience—was both casual and urgent, and probably didn’t look or feel like publishing in the moment. But it was a necessary and timely act of dissemination.’

In her non-linear essay ‘A Vade Mecum of Urgent Editing,’ Miriam Rasch invites the reader to pay attention to an often overlooked in the publishing process: the editor. Moreover, the reader is offered the chance to become final editor of the piece themselves by jumping through the different sections, following their intuition, and thus foregrounding editorial choices. In doing so, the form of the essay displays the need to think about editing as an act of making connections and of fabricating a story.

In traditional publishing, the ideal editor remained invisible, shying away from publicity and withdrawing from the text altogether (with a few star editor exceptions). Instead, urgent editing affirms the position of the editor and allows the editorial work to remain visible or traceable. Urgent editors play a vital part in their tending to community and the possible different positions a publication can take up within different publics. Such urgent editing doesn’t work towards a finished product, which can drop off the end of a value chain but sees the publication as a live entity that can act as an intervention, making things happen and doing something in the world.

Labor Neunzehn are a Berlin-based collective who delivered a workshop at the Urgent Publishing conference around their project ‘ASAB—All Sources Are Broken.’ It may be regarded as a case study of another important time-factor in publishing, which pertains to the afterlife of publications. Urgent publishing also means caring about your publications and readers after the first celebratory book launch, and especially after the publication has been followed-up by one, two or numerous others.

Labor Neunzehn focus on what could be called the network of a book, made up of the constellation of references used in the book that often remains stuffed away in footnotes or long bibliographical lists. This network that surrounds the work is further brought to life by each reader that engages with it: ‘ASAB’s editorial flow fosters the creation of parallel narratives starting from the reading and rereading paths contributed by the users.’ The different technologies used in tracing, opening and following up on references are important. By highlighting these as an articulate afterthought, the book itself appears again as a technology itself. In that way, the materiality of a work and how it lives among its readers is brought to light. Urgency here also resides in the ‘cracks, leaks, drifts and open spaces,’ those places where the book opens itself and asks for a response. It challenges us to ‘rethink the margins not as cracks to be repaired but as new openings waiting to be expanded,’ demanding a slowing down of the encounter one has with a publication.