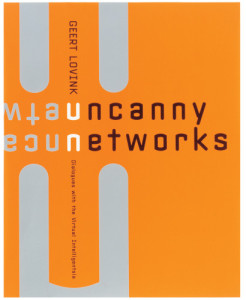 About: A collection of interviews with new media artists, theorists and critics from East and West-Europe, USA and Asia who reflect on their concepts and practices. It provides a critical context of ideas, networks and artworks that have shaped the past decade.

For Geert Lovink, interviews are imaginative texts that can help to create global, networked discourses not only among different professions but also among different cultures and social groups. Conducting interviews online, over a period of weeks or months, allows the participants to compose documents of depth and breadth, rather than simply snapshots of timely references.

The interviews collected in this book are with artists, critics, and theorists who are intimately involved in building the content, interfaces, and architectures of new media. The topics discussed include digital aesthetics, sound art, navigating deep audio space, European media philosophy, the Internet in Eastern Europe, the mixing of old and new in India, critical media studies in the Asia-Pacific region, Japanese techno tribes, hybrid identities, the storage of social movements, theory of the virtual class, virtual and urban spaces, corporate takeover of the Internet, and the role of cyberspace in the rise of nongovernmental organizations.