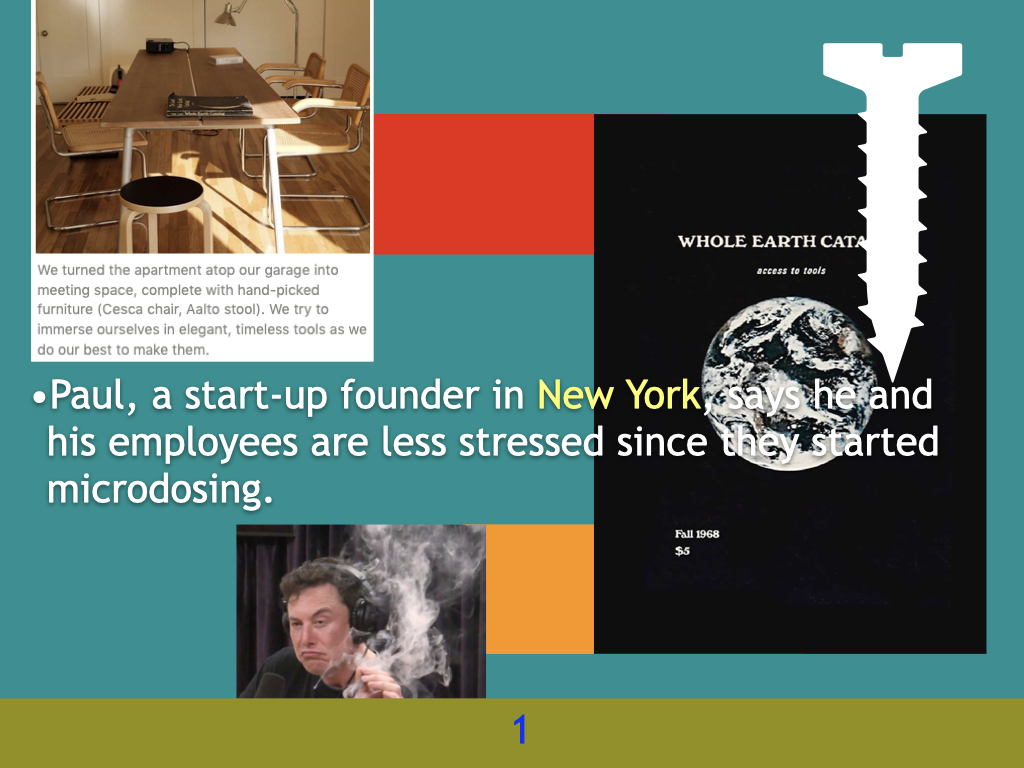 The mainstream use of software and psychedelic drugs share a countercultural history that originated in 1960s California. Software has been booming since. But most research on psychedelics was stopped in the war on drugs. As a reaction towards the ongoing mental health crisis, a lot of the research on psychedelics has been revived and initiated, and a lot more trips have been taken. Perhaps this psychedelic renaissance has something to do with the effects of software on our brains? At least the evergreen analogy of two kinds of users suggests so.

Software has been mainly developed as a tool to enhance productivity at work—the gaming industry perhaps being an exception here. Historically, hippies aren’t that known for being the most productive (,or happy) in an office. At the same time tech figures like Steve Jobs or Douglas Engelbart are known for using and promoting LSD as a creativity booster. Software developers find themselves at psychedelic retreats or are micro-dosing at their standing desk. Google found their CEO at burning man, and Apple still loves to dress as the creative default for the anti-establishment. Psychedelics and by extension the (counter-)culture they were popularized in, found their way into the office as a productivity tool and brand narrative. Software blows my mind.

Another genre of productivity tools is presentation software—also called slide-ware. PowerPoint is one of the most installed pieces of software on the planet. In One Damn Slide After Another Erica Robles-Anderson and Patrik Svensson look at how PowerPoint has homogenized all occasions for public speech. Presentations are no longer the work of admin but a performance opportunity for everyone. For the project-oriented, entrepreneurial extroverts entering the liberated firm this is ‘neither job nor calling but a site for personal growth’. It is a chance to speak, a moment for personal expression, that according to Robles-Anderson and Svensson doubles as an auditing method, to establish if someone is a member of a group. They cite Franck Frommer, who argues that:

PowerPoint is an ideological apparatus that has allowed decentralized organizations to discipline knowledge workers.

Discipline here is not top-down but vaporized into the silent agreement that everybody signs when entering the office as a gateway to a new horizon. The office is not just a place to work, but a place to gather around shared ideals. If the presenter can ‘lay it down fresh’, it unifies the speaker with the organization—as if ‘everything connects’. The authors cite Rich Gold who describes presentations as ‘the war dance that inspires the fighting power of a tribe’. Even though the speaker is ‘armed with a template for authoritative speech’, it’s less about the transmission of information and more about finding agreement and unity. The liberated knowledge worker is a pacifist. So maybe presentation culture behaves more like a rave in the desert, at sun-down, around a fire? Within that setting, slide-ware facilitates a form of file-sharing that enables a collective hallucination firing up spirits and production.

This is what Fred Turner describes in his lecture Burning Man at Google. Turner uses Yochai Benkler’s term, commons-based peer production to describe how the open-source, communal spirit of places like Burning Man is used as an infrastructure to leverage informal product development at Google. Back then more than 50% of Google’s products came out of time that was dedicated to ‘personal growth’, by workers that gifted them to the community. Turner ends the lecture with a defense of bureaucracy, arguing that organizing money and labor according to social norms makes it harder to challenge what’s in place.

Here Jeff Bezos’ six-page narratives handed out in Silent Meetings, break with the formalized informality of live presentations, of ‘charisma channeled through institutional means’, of ‘one damn slide after another. But why all the complaining in the first place? Robles-Anderson and Svensson argue that even though there is a rich history of artists misusing slide-ware and deconstructing presentation-culture in general, those interventions don’t harm the infrastructural imperative of one slide at a time. But isn’t a word also just one damn letter after another? This blog post is just one damn sentence after another, so are memos. But besides the document itself, the key here is who is in charge of tempo.

Where the slide presentation enforces a rhythm of looking and listening, the memo in a silent meeting asks each reader to pick their own time and place. And by switching from live speech back into writing the silent meeting allows introverts to participate in the presentation culture of extroverts. It’s the comedown, the ‘cooling of all senses’ in the McLuhian sense. And like that closer to hallucination than the actual (public) speech event and its after-party. Where the keynote might be compared to the frenzy of liquid light shows, the silent meeting sits closer to how 60s happenings were conceptualized by artists like John Cage or Allen Karpov. The memo becomes the index card or grid for a scripted environment through which each performer/reader moves individually as the session progresses from silence into discussion.

The silence in a Silent Meeting might be the logical reaction towards the continuous buzz of a presentation culture. In structure, it’s the awkwardness of no follow-up questions. It’s the ringing in your ears after leaving the venue. Depending on the memo it might as well be the break in a continuous stream of arguments, a conceptual gap that hasn’t been named yet. Or in the words of Jeff Bezos:’ The standard is there, and it is real, even if it’s not easily describable.’ 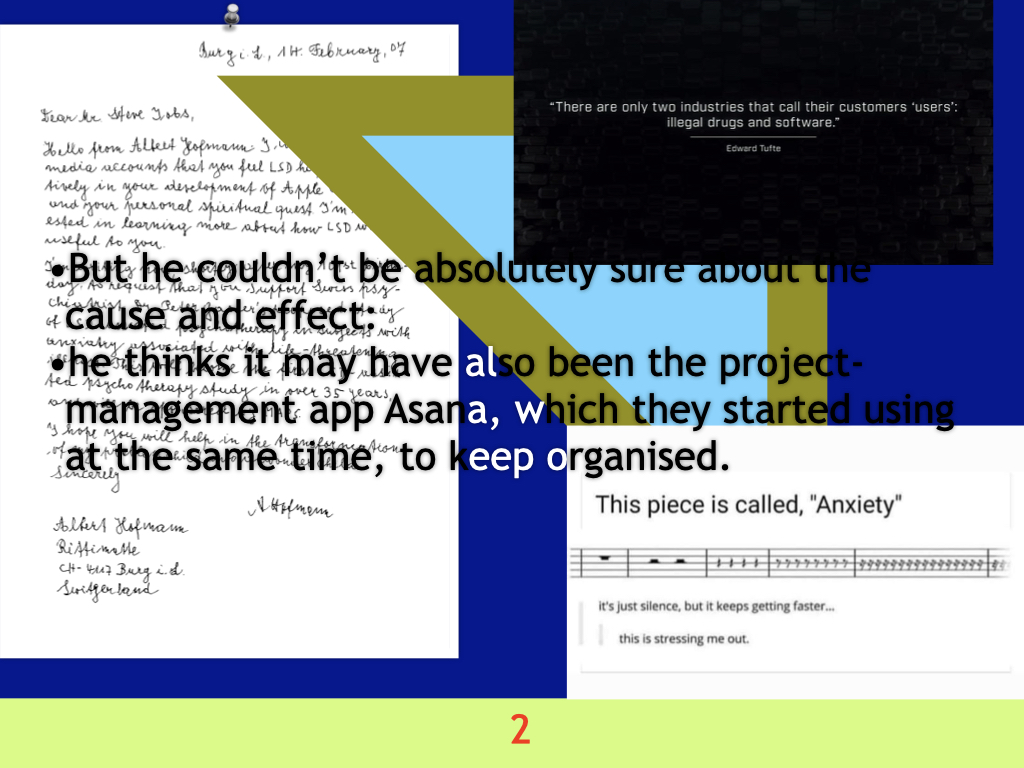 Talking about the aesthetics of big-tech is tricky. The ubiquity of flat, geometric sans-serifs, cutesy illustrations and their compulsively positive kindergarten appeal seems to be too easy of a target. How do you criticize something that is already so blatantly parodying itself? It seems like, everything that has been automated, A/B tested, and put into [...]