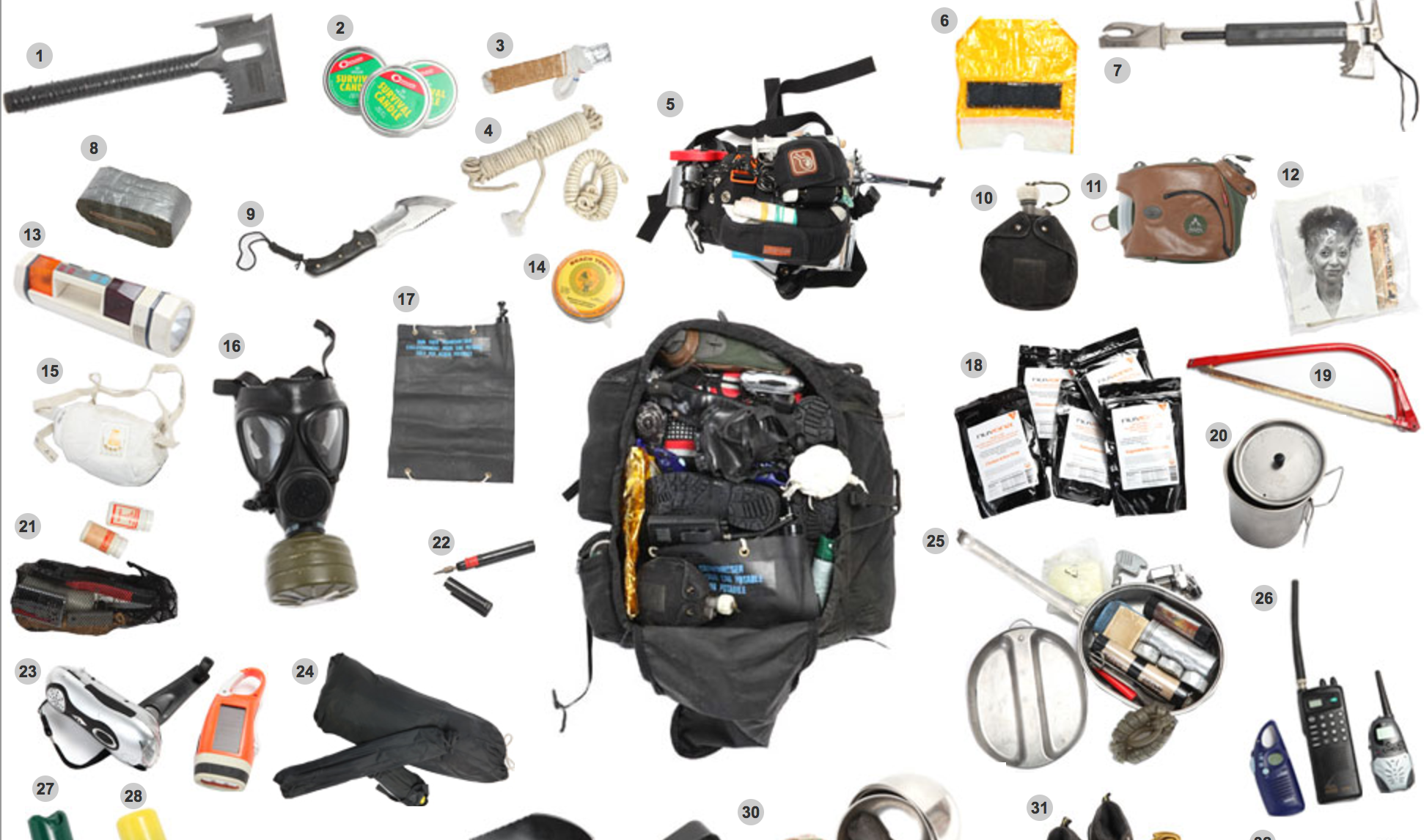 While you’ve been busy salting away a handful of pennies you made in the gig economy, while working a third shift in unpaid digital and emotional labor, there have been rising whispers amongst immensely wealthy white men, hedge fund managers and CEOs from Silicon Valley to New York, that speak of a palpable fear that all that smart, networked, and artificially intelligent stuff the Silicon Valley has thrust upon us eager masses, sooner rather than later, is bound to cause social tensions that could take on a violent form. Think pitchforks, class warfare, or worse: the Apocalypse. These so-called Survivalists, Seasteaders, or “Preppers” as some call themselves are preparing for the moment the proverbial shit hits the fan.

Antonio García Martínez, a former manager at Facebook, bought five acres of wood on an island in the Pacific Northwest and stocks up on food and ammunition. Peter Thiel, a venture capitalist and billionaire, bought land in, presumably, self-sufficient New Zealand. Reddit’s CEO Steve Huffman and the former Facebook employee Yishan Won both have had laser eye surgery. Huffman explains in an interview with The New Yorker: “If the world ends…getting contacts or glasses is going to be a huge pain in the ass. Without them, I’m fucked.”Asked by The New Yorker to estimate what share of fellow Silicon Valley billionaires have “acquired some level of apocalypse insurance, in the form of a hide away,” Huffman responds “fifty-plus per cent.”

Some billionaire libertarians, one of them, notably, Milton Friedman’s grandson, founded the Seasteading Institute and plan to build autonomous city-states on floating seaborne platforms. These Lockean floats function largely as a tax haven for the ultra rich, partly as alleged “free zones”, and partly as permanent dwellings outside of government control, at sea, off the coast of Tahiti. And Larry Hall, a former computer scientist at the Florida Institute of Technology, and a billionaire and specialist in networks and datacenters, started the Survival Condo Project, “a fifteen-story luxury apartment complex built in an underground Atlas missile silo,” somewhere in the north of Kansas, The New Yorker reports.

In a former nuclear warhead Hall has built his molehill where the ultra-wealthy can grit their teeth and hole up, for about five-plus years, underground, in 12 luxury condos tailored to all the owner’s needs 4 million US dollars can buy. The shared amenities include a pool, a rock-climbing wall, a pet park, an Apple-Mac-equipped study room, a gym, a movie theatre, and a library. The “medical wing” of the Survival Condo is decked out with a hospital bed, a procedure table, and a dentist’s chair. In case of societal collapse, or when the Internet of All Possible Things becomes a supernova, a “SWAT-team-style truck picks up any Survival Condo owner” within 650 kilometers, Hall explains.  He has sold all units of his Survival Condos. Taken together his bunker can withdraw and support a total of seventy-five fortuned people, and their pets. – Dear Mother of God, here come the have-nots… I’m outta here!

There seems to be the insistence, a quasi-religious conviction if you will, that the totality of the system is inherently flawed, ultimately self-destructive, and wrath is upon us. You better run to your million-dollar bunker and gut it out with your underground hydroponic vegetables produced under grow lamps running on renewable power.We may ask: What is gained when “all” goes South? What does an apocalypse insurance compensate for?

Douglas Rushkoff argues in Present Shock: When Everything Happens Now that more than “rational self-preservation” apocalyptic thinking “gives us a way out. A line in the sand. An us and a them. And, more important, a before and an after.” The opposite of “we’re fucked” is “here comes the Singularity.” We know what is coming next. We are here now. This way we are going. And this is how it will all end. Solace is found in “knowing” what comes next, after the shift, even welcoming collapse, and preparing for that by going off the grid. We don’t like surprises and loath unknowns. “Collapse porn”, to use Leigh Phillips’ term, gives us a sense of location and direction, an illusory semblance of control. Preppers hope to defer immanent societal collapse by adjusting the present conditions of their lives. Wise in foresight, they wish. They attempt to domesticate the future, to break it like a horse.’I just know it will happen.’ “Apocalypto,” as Rushkoff calls it, resolves the “precarious uncertainty” of present times, it offers “the relief of finality.” The all-too-human drive towards determinancy and consistency draws Preppers towards whatever they can latch on that helps them cope with indeterminancy and inconsistency, albeit as frightening as stories of immanent apocalypse and as absurd as to slap-dash 4 million US dollars on the table to bury yourself alive.

In her Marshall McLuhan Lecture of 2017, held in Berlin, Sarah Sharma critiques what she calls sEXIT strategies. sEXIT comes in a variety of forms, Sharma explains, “the refusal to work, to reproduce, to care, to do particular kind of labor, the ease of exiting a room”. Such exit strategies, she argues, “fall heavily on gendered lines.” “Exit is an exercise of patriarchal power,” Sharma argues. What sEXIT promotes is to not show up in the political arena, but to “take shelter beneath it, refuse politics…”, Sharma says. sEXIT strategies, she writes, stand “in direct contradistinction to care … Care is that which responds to the uncompromisingly tethered nature of human dependency and the contingency of life.” The point Sharma makes is that “sexodus” has a gender, a class and a color. “The white patriarchal penchant for exit rears its ugly head at any hint of having to live with one’s supremacy in question.”

For Preppers, I suppose, worse than the Apocalypse is the perpetual ambiguity about when Dr. Frankenstein’s creature will show its strength and take away their toys.

this essay is published in On the Necessity of Gardening: An ABC of Art, Botany and Cultivation  Against Gardening: Moments in the Life of a Gardener by Patricia de Vries The story is the schoolbook example of Joseph Campbell’s monomyth template: a protagonist encounters a decisive moral challenge and, after some struggle, learns an important [...]

Design for Care? Narratives of Climate Care in Design

this article is published in Press & Fold Magazine     Design for Care? Narratives of Climate Care in Design by Patricia de Vries May you live in interesting times, is an expression you may have heard over the past year. Some use it as a blessing — something you may wish for others. Others [...]

Slanted Magazine published an excerpt from my book Algorithmic Anxiety. You can find their #37 AI issue here Here’s the PDF of the article: Slanted_AI#37_Patricia-de-Vries