Wormser is philosopher, being an expert in philosophy of Sartre. He is also the editor of sens public.
Moreover, instigator of this event and this network. We talked then about independent thinking about Wikipedia. We have to emphasis the similarities and differences in comparison to the rich history of encyclopedias; we have to put Wikipedia into perspective. 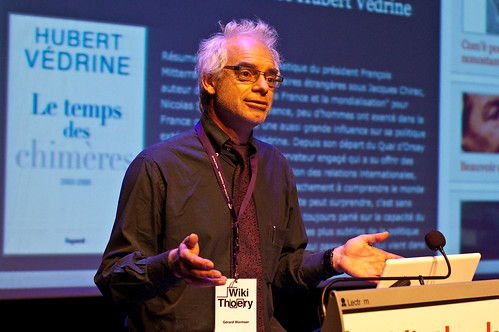 “I will try to make a transition of the first and second session: I will stress a point not yet mentioned and that is: Is Wikipedia becoming a media or an editorial project?” The problem is: if Wikipedia is the 7th most important website, it is a large part of the internet. It is altered by megalomania. Can you have unity in this project if everyone has to bind in? And what is still the goal of other editorial processes? It is multi- linguistic, but not international (separation of languages). Is Wikipedia a mirror of our society, or is it new in the society of knowledge?

The concept of the knowledge bar is introduced: it is about maintaining ambiguity. The bar is place to meet and discuss, but is is also where we select information and links. We need both significations of the bar. The point is that every project needs physical meetings, otherwise it becomes a utility (just like water from the tap).  The sphere of knowledge is in a contra-dictionary movement. On the one hand, knowledge never has been so important for society. On the other side, the standards of knowledge are becoming blurred: it becomes hard to critique, because it is becoming decentralized. This is the risk facing Wikipedia publications. We have to rediscover that science is not in line with business economy.  This is also part of economic part of science. Websites like Wikipedia are lowering the costs of knowledge, not paying the actual workers. In a post industrial  economy, how can one be in charge of their own economy. If what is learned in university is of no use in society, what then? Or what is at stake when this knowledge is freely transportable via open access publishing? The problem is that this knowledge production is not translatable in a social positions. However, these issues are not new in history: encyclopedians during the french revolutions also faces these issues, with the difference that the condition in which Wikipedia is now evolving is much easier than the ways of working of the encyclopedians at that time. Also then, encyclopedians were codyfying knowledge of people, but without a methodological order in this knowledge. They were searching for links between knowledge; this was more important than actual loose facts. The same double face appears with  encyclopedians of the French 18th century. The goals of an encyclopedia is to link some words to facts.

The way we can circulate into the pool knowledge and can make use of the knowledge bar, this is the most important. On a practical level, the navigation inside these websites becomes relevant. Wikipedia is challenged by other projects, but also by the fact that everyone of us can be the best journalist, having real debates with real persons over real time. We consider the entire reference sites as to be important in Wikipedia project; it is open. The encyclopedia of the 18th century were also not enclosed in the library in the 18th century. An important distinction is that the equivalent of our screens were not closed, private experiences, rather, they were public and open. The two meanings of the knowledge bar were at work at that time: collecting knowledge and discussing knowledge live, openly and public. Now we do not know the use of these Wikipedia pages. If it has to be discussed in public space, we should have more public discussion (like today). 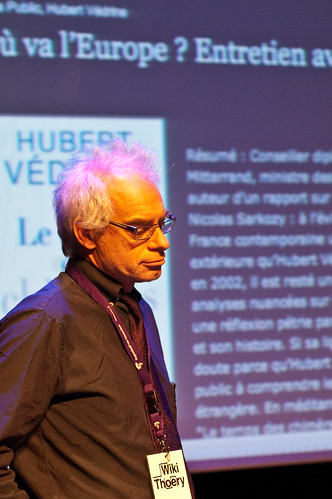 For our century, the question is to understand how our reflection can open as a new discipline. If we cannot find a new way to behave, then the inner goal of any encyclopedia will be lost. It is not a surprise that the 18th century encyclopedia and the Enlightenment lead to the revolution. This was a result of the way that society was regulated compared to how knowledge was regulated. The fact that emancipation was on the side of the Enlightenment-thinkers made people think that regulation was on the right side. This was en example of the links between the knowledge bar and the emancipation bar: It was no longer possible to stay with a monarchy with the new knowledge regime. A direct consequence of new knowledge.

This was real context of which Foucault was writing in “words and things”  (les mots et les chausses). It was changing the mind order of how people were thinking, talking and educating. Wikipedia will be confronted with a choice: will it grow into a mere utility (such as a TV), or does it still have he potential to change people’s minds (unregulated). Open access does not say anything about the user, the usage and the possible future.

Some questions to end with: discussions is about where collaboration on encyclopedias begun (on the long term). Erasmus and Moore were very collaborative. 16th century, the beginning of open publication and collaborative encyclopedias was already begun. We have to maintain the idea that critical space is alive. This space is different from open space.

We are open with our body, knowledge is not only prestige; it is sensitive and meaningful. We have to embody the knowledge; we do not only have to be dependent of a technological tool. We must involve more young researcher in the field of research into publishing.We (at sens public) are establishing a network of international research. We embody our own knowledge with our own behavior. This ethical point of view cannot be separated from a practical point of view in the production of new knowledge.

Q: Difference between 18th century and now: discursive confidence. In the eighteen century there was a normative science. We lost that. 18th century was dependent of a fact.

A: I do not think Enlightenment thinkers were per se deterministic. Knowledge had to be conveyed in a sensible way. The literacy or  language style is therefor very important. This is lacking in Wikipedia. How deterministic and standardized Wikipedia is becoming (the style and quality of writing) This could be great progress if we want  multiplicity of culture in a single syntax.

Q. I am appreciative of the historical perspective. But  think that you have missed  is the realization that the Internet has brought radical differences. My q is: what practices would accentuate that were also present in the 17th and 18th century?

A: The collaborative side is one note. To be partner in such discussion in the 18t century, you had to member of a formal society that was organized to discuss these matter. It was a social network more than a scientific academy. What is different with the now: the student of the university now is also a good journalist in order to assess positions. The student is more empowered. Specifically new is that there is a real society that is not producing new knowledge, but receiving knowledge and work it via scientific journalism. I would maintain with John Dewey, the question of the public is still important.

Q: In the beginning you posed the question: Is Wikipedia a media or a editorial. The people who are working with it,that I know  want to work away from normative stance (ending up with these networks becoming even more normative)

A: We have to invent new collaborative institutions. I cannot be left to pure benevolent activists. The Wikimedia institute is a good example.