Reagle’s presentation can be accessed on his own website. 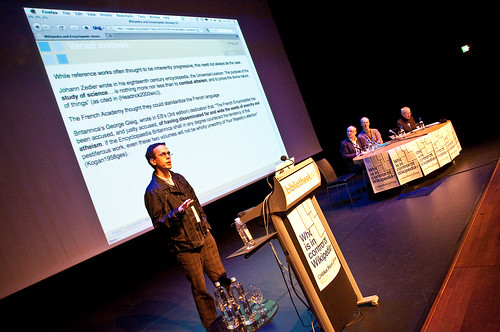 I want to make sense some of the criticism Wikipedia receives in a historical frame. I want to do this in a very simple proposition, that; reference works embody larger social anxieties. One of the central things about thinking about encyclopedias is through their motives. Because of the Enlightenment, we tend to think of progressiveness as an inherent property of encyclopedias but that has not been always the case (Reagle’s examples can be found in his presentation on the link above). Encyclopedias can combine progressive or conservative elements and their reception can again be perceived as either, regardless of the inherent qualities of the work in question. The same has been true about Wikipedia as well. While some people criticize it for being anti-academia and hostile to expertise, other people blame it for being a servant of peer-review institutions. While Wikipedia aims to represent all claims to knowledge via verifiable sources in a neutral point of view, this creates an inherent bias towards opinions that are more widely represented within verifiable and notable sources. This natural bias for representation according to proportional evidence aggravates fringe opinion holders (Creationists etc.). Yet, even among scholars the meaning of what an encyclopedia should represent is not certain, not only concerning Wikipedia but concerning historical encyclopedias as well.

Based on all these opinions and issues in discussion, we have understand this debate not strictly about encyclopedias but about larger societal issues. That is my approach; To get a sense of what it is that Wikipedia stirs in society.

At the heart of most discussions concerning reference works in general, and Wikipedia in particular, is a question regarding the degree of normativeness a reference work should embody in contrast to being merely descriptive (Telling how things should be instead/in addition to telling just how they are).

Also, Why should even we care? We certainly don’t care as much about Facebook, to the extend of having conferences solely devoted to it.

I) This is a market construct. Mid-20th century marketing of Britannica; “Send your children to the Britannica.”

II) Questions of material constraints: What do we put it, what do we take out?

I) Collaborative Practice- How do we work together? II) Encyclopedic impulse III) Bibliomania IV) Technological Inspiration – To what extend technology facilitate our struggle to reach our encyclopedic goals?

I will be focusing on the last one.

One of the central arguments of the merits of technology relates to hypertext. It has been hailed as a door for more fluid and accessible learning but it has also been accused of destroying the sanctity of authorship and removing us from real knowledge in favor of mere information. I find most such discussions to be ahistorical, the urge behind connecting information like this is not new. Otlet dreamt of connecting knowledge with index cards and loose-leaf binders.

One other point of heated debate is concerned with the hype surrounding Wikipedia. Critics argue Wikipedia’s shortcomings as a general cultural model. Yet, Wikipedians themselves are seldom the ones that believe in this hype. They usually say “Wikipedia is awesome not because it’s perfect, but it’s surprisingly good. We thought it wouldn’t even work but it’s surprisingly good.” While some critics find even this to be not good enough, I think this might be a question of glass half-empty of half-full. However, comparing something to Wikipedia has become the new cliche. Another indicator that Wikipedia is being used as an example in a larger cultural discussion. Such discussions closely reflect larger, and very common, generational issues, maybe not directly related to age but to certain sensitivities (quotes Douglas Adams on the way people’s perceptions change over time regarding technology). Before Wikipedia, there were many books pointing out shortcomings of other encyclopedias.

A lot of the discussion about Wikipedia is representative of some of the prevailing attitudes and beliefs, and some of the contradictions of these attitudes and beliefs, as they shift, as facilitated by technology, and therefore (my argument); Reference works do embody and provoke larger social concerns and with respect to this issue of technology and technological inspiration, I think we can see a concern about the integrity of knowledge, the sanctity of the author and the concern about hype, with the background of this generational difference in perception. 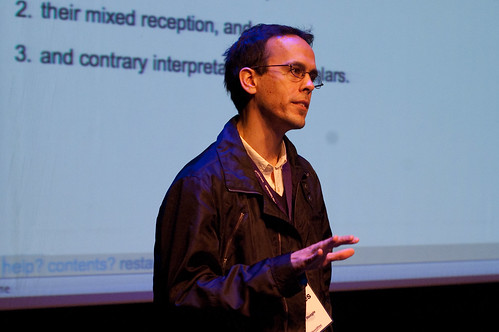