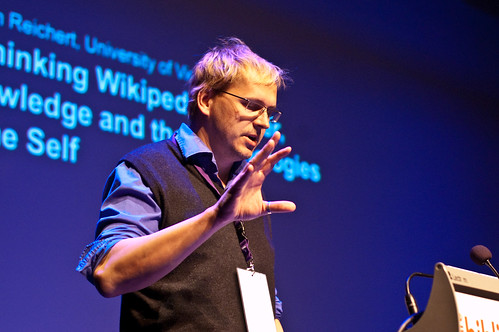 Wikipedia is fundamental in current shifts on how knowledge is produced and organised. This is the thesis outlined in R. Reichert’s presentation.  According to Reichert  Wikipedia should be understood as representing a new mode of power. Attempting to offer (a short) archeology of Wikipedia, to a room of mostly non-Foucauldians,  Reichert argued that power, as a regime of mechanisms on Wikipedia, is controled and exercised through the network of users and editors. Wikipedia thus produces normative orders of knowledge via the micro-management of political engagement with so-called knowledge. So, for example, wikipedians can’t change what they can do on Wikipedia, there are rigid roles and fuctions engineering the discipline of the self.

Wikipedia represents a specific discourse of participation and produces particular technologies of the self. On Wikipedia subjectivity means engeenering  the impersonal view of the self. Reirchert also streesed that wikipedia represents a certain way of organising knowledge towards effectiveness, and control. Its objective is to disaminate a normative based archive of knowledge, and a new social clasification system of flexibility.Wikipedia  is also a space in which discursive practices of excluding and discipling reign. For example edit wars are about exclusion and also about  accepting, together with other practices they form disciplines.

Reichert key argument also focused on outlining how Wikipedia constitutes a new paradigm for organising culture that is increasingly adopted by many business. Joining many outside the and inside the Foucauldian tradition Reichert sceptically explained how the wiki way of orgnaising and doing knowledge is alarmingly being exported outside the realms of profit making. Acocrding to this line of thinking Wikipedia technologies of the self produce flexible and efficient human labour in an organisation that can be assigned to any task.

Finally Reichert talked about how Wikipedia visualises the discoursive process it generates. This means users can actually see these practices deisgned in the wikipedia interphase.

Audience responce was typical of the cynicism often voiced in responce to Fouldian analysis: what does this all mean? does it mean subjects are actually subjugated and that we cant really escape the wikipedia mechanism?…As the morning progressed Reichert’s pessimistic scepticism appeared less cynical, it grew on the audience …and echoed more like  a refreshing european negative thought in comparison to the more alien american positive voices that had surfaced by late afternoon…. 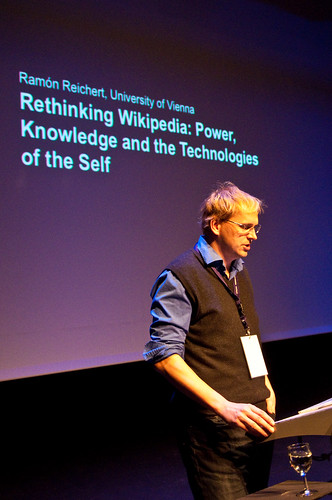