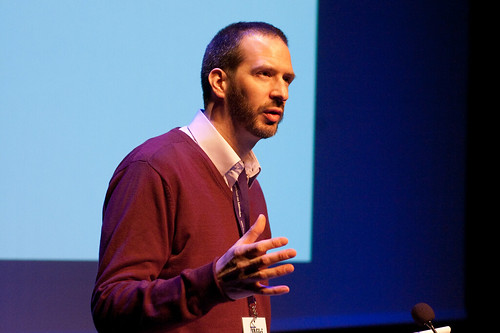 With a love for technoculture, a research past in Californian cyberculture, and a present in French critical intelectual new media thought, O’ Neil presented a compelling talk on wikipedia user culture or rather “tribal culture”.  O’ Neil presented his stream of conciousness in tags (projected on a large screen) as he developed his arppoch to on-line triibes. Interested in the hacker habitus and how its production,  his talk opened with a brief discussion of the shortcomings of critical sociology. Despite O’ Neil’s  pessimism with regard to the conspiratorial and dis-empowering aspects of critical sociology, he went on to focus on the work of Boltanski and the field of justification, which Boltanski understands as “open”. Before linking Boltanski with Wikipedia O’ Neil was careful to frame his understanding of Wikipedia within the context of new media political economy mentioning that 13% of Wikipedia editors are female, and that this means that certain types of behaviors are more tolerable, that for example aggressive commentary and flaming are accepted as standard practice. Machismo, in other words, frames the wiki habitus.

O’ Neil proceeded to literally map the different orders of online justification, and how these can possibly come into existence in different tribal formulations in different network cultures. Central to understanding the map was the term “on-line tribal burocracy of social organisations” coined in his book Cyberchiefs Autonomy and Authority in Online Tribes. O’ Neil understands charisma, hacking, sovergnity, and the archaic, as central to conceptualizing how on-line user tribes work. Situating Wikipedia in a map showing a sovergnity and charisma in each end of the vertical and horizontal axis,  O’ Neil concluded that charisma and soveirgnity are in particular very important in understanding how Wikipedia as tribe works, and that charisma is actually more important. O Neil also discuss ethical issues arising when conducting research with wikipedia editors.