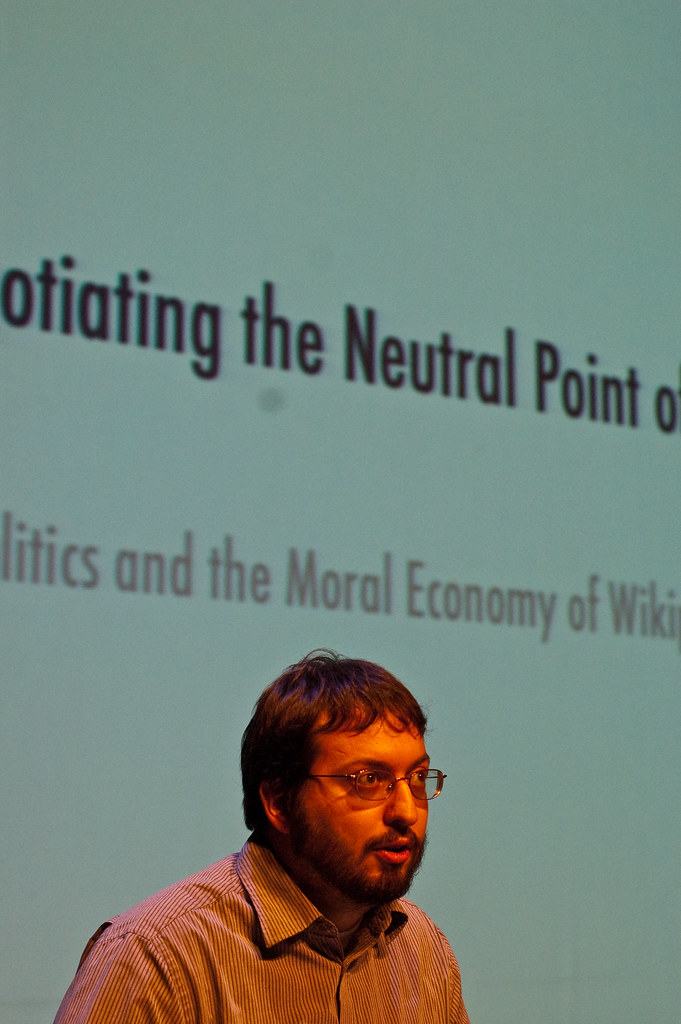 Negotiating the Neutral Point of View: Politics and the Moral Economy of Wikipedia

Presentation by Andrew Famiglietti for the Critical Point of View (CPoV) conferece in Amsterdam, 27.03.2010

Andrew Famiglietti’s presentation was about the concept of moral economy applied to the Wikipedia. He does so by analyzing the article called ‘Gaza War‘ in the period of 2008/2009. He starts by referring to the work of E.P. Thompson and how crowd intervention influenced the way grain prices were regulated in the 18th century. He applies this idea into how Wikipedia regulates its resources around its community. First, how was the crowd regulating resources in times of scarcity? In case of Wikipedia: how do they manage the scarce resource of volunteer labor within the site? This is a matter that Wikipedians have to work out themselves. He believes that they do that in terms of what Thompson called ‘Moral Economy‘. In the 18th century there were outrages concerning the procedure of regular market forces that was considered illegitimate by the starving population; in the 21st century’s Wikipedia there were outrages by the editors, who considered some of the actions by the site owners were illegitimate based on moral values.

He presents then a case study of how values that organize the moral economy have particular political effects in the particular case of the Gaza War article. He shows how the particular design of the page influences how debate emerges. Famiglietti starts by pointing out to the title, which is handled as being an important element on debates. Secondly, he points out to the info-box on the right side of the article, which has a central role in structuring information around the article and therefore was an important part of the debate. He continues by calling our attention to the 66 archive pages of the discussion, which are equivalent to about 600 printed pages. The page provides bookmarks to particular important debates, which is necessary due to its sheer volume. There is also a timeline that can be used to see how the debate evolved. He focuses his studies on the heavy editing period while hostilities during the event are going on and the period immediately after that.

The volume of information on the discussion page, along with the difficulties of navigating it, makes it difficult for editors to actually keep up with the conversation and understand what is going on. Bots here have also a role, as they archive pages by moving them form the main page. Some editors become increasingly frustrated and others believe that this is done on purpose in order to sabotage them.

As the pages become longer and longer, chunks of information are split out into sub-articles. The discussion than shifted into whether this was a POV (point of view) fork. Forking points of view were suggested by some editors (maybe naively, not knowing about Wikipedia’s policies) as a kind of a potentially positive direction to Wikipedia to move. This notion of splitting different POVs has been explored by Wikipedia, however it would set up different articles on the same topic, avoiding neutrality. The idea was largely rejected and Famiglietti believes that it has to do with the management of labor as a resource. Forking duplicates effort and splits the labor force. He believes that the containment of forkings is intended to retain scarce labor resources. (I ask myself though; discussing is so much more work, so splitting would be a better option, if it was the case.)

Dangers of nationalism to Wikipedia: Administrators have fundamentally played a role in policing the boundaries of the editors’ community. The issue was therefore under a particular administrator’s scrutiny. The editors were aware of that scrutiny and the fact that they were under surveillance. Neutrality was constantly renegotiated. In several occasions the title of the article was changed depending on who was available to talk to at the moment. This also points out to the fact that it is not possible to represent all POVs in the title, which is another design problem of the platform. Moreover, the process of neutrality involves the three guiding principles: Neutral Point of View , WP:V and WP:OR. Several times it has been enforced that they were after verifiability and not truth. This moves debate from difficult questions about the truth to a debate about reliable sources. This is useful in keeping the editing process moving. However it may privilege certain historical forms of inequality, as there is a large reliance on western, but not in Arabian sources.

Famiglietti finishes by emphasizing this was a presentation with the goal to show how the community works and what seems to be valuable for them. Also, he tried to show the community’s attempts to organize their scarce labor force. By understanding that, he hopes one can better intervene in this debate more effectively.

I do not particularly agree with him, that NPoV has anything to do with managing the ‘scarce’ volunteer labor force. His presentation was nevertheless very interesting and brought up many important points about the design that were new to me.