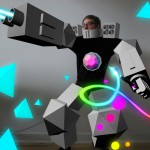 Jeremy Bailey is Toronto based media artist that focuses his practice on the interaction between his own built software and his body, exploring actions and gestures with which he integrates himself with the virtual. He tests his augmented reality bodies by means of video performances that take the form of internet video tutorials;  all of this carried out with a deep sense of humour and the amusement characteristic of a comedy show . He bases his work on the ironic hope in technology that his naïve character “Famous New Media Artist Jeremy Bailey”  emphasizes in every new creation, turning all his discourse into a sweet parody of our current relationship with technology.

Since his early works Jeremy started doing performances focusing on the interaction between himself and the computer.  As he suggests, in the 60s and the 70s artists commenced doing specific performances for the camera – best described in Rosalind Krauss “Video: The Aesthetics of Narcissism (1976)” . However,  with the birth of the computer  video-art experienced some changes and artists started doing  “Performance for the Computer” .  For instance, in his early video “Don’t Mouse Around” (2004), Jeremy  pretends that computer cursors lift his lazy body laying on the floor. This work is a more simple (in terms of software) but a good example of some of the first ideas behind his general work, which focuses  on the limits and possibilities of technology. Jeremy experiments with interactivity in an attempt to explore this point in which computers  (although becoming extensions of our brains and bodies and thus fulfilling all type of desires just possible in a virtual reality) are still machines and consequently, they limit and impose us specific patterns -actions become determined by the software we employ-. Despite the limitations, Jeremy conceives the computer as an element for artistic expression,  and exaggerating this last statement, he becomes  this famous and naive character who believes in the “unlimited” possibilities of this medium in order to construct a better human.

For instance in his work “The Future of Television”(2012)  he creates a mask on his face on which he projects multiple TV channels following symmetric patterns. Another piece  is  “Your Ad Here” (2008) where Jeremy becomes a billboard on which different ads are projected. In “Public Sculpture”(2009)  he makes public virtual sculptures  during his residence in Ukraine, proposing a more free and personalized public sculpture that poses questions on public art. In his series “Videopaint 1.0” (2004) “Videopaint 2.0” and “Videopaint 3.0”(2007) he draws on the computer using a software that detects gestures, levels and speed of voice and movements; a fair demonstration of Jeremy’s notion of the computer as an expressive and creative device. . “Warmail” (2008) is a collaborative software performance that consists of using audience’s dance and  songs to send an e-mail to Jeremy’s mother while directing a space war campaign. Finally in one of his last works “Augmented Reality Portraits” (2013)  he creates augmented reality  portraits for people that want to contribute on the crowdfunding site kickstarter.com. If you still want to see all his videos visit his channel on YouTube.

We have interviewed  Jeremy Bailey to ask about  all these issues and to let him better explain it with his own words. Due to the context of Video Vortex, Jeremy made the interview augmented using a similar mask to that one of “The Future of Television” and despite of some Internet connection problems -which were very appropriate while talking about technology- he summarized for us the main ideas of his works during a really nice chat.

In this post I want come back to Cinemagraphs and add some more thoughts about this visual phenomenon located halfway between photography, video and animation. Although Cinemagraphs might seem like a very novel visual case they actually have a lot in common with many of the characteristics of early cinema and animation; they both have […]