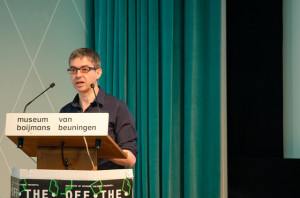 Alessandro Ludovico, the author of Post-Digital Print, The Mutation Of Publishing Since 1894, is an Italian media critic and editor in chief of Neural magazine (http://neural.it/) since 1993, for which he received an honorary mention of the Prix Ars Electronica 2004. He has published and edited several books, and has lectured worldwide. He’s one of the founders of Mag.Net (Electronic Cultural Publishers organization). He has been guest researcher at the Willem De Kooning Academy in Rotterdam and he teaches at the Academy of Art in Carrara. He is one of the authors of the Hacking Monopolism trilogy of artworks (Google WIll Eat Itself, Amazon Noir, Face to Facebook). He is currently a PhD scholar at Anglia Ruskin University in Cambridge (UK).

Alessandro begun his lecture by addressing the changing mediascape, shaped by two opposing forces: on one side the underground, personal agendas and, on the other side, the corporate interests of Google and the like. The post-digital print era is witnessing the booming in net-content or IT-processes based artist’s books (with a whole taxonomy of techniques and approaches), and the efforts in collective scanning of underground culture in print, shared in proper digital repositories, is revamping the production and rediscovering of critical content in a classic form. On the other side, the unveiling of Google’s major plan with the industrial scanning, the rising of the un-sustainability of newspapers’ business model, the growing role of software in literary and journalistic production, and the constant fine-tuning of commercial e-publications’ rules. 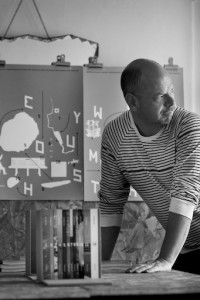 Alessandro went on to describe the taxonomy of publications scraping the information from the internet. As a prime example, he introduced a New York-based artist and creative director, Paul Soulellis, the founder of Library of the Printed Web, a curatorial project organized around artists who use screen capture, image grab, site scrape and search query to develop printed matter from content found on the web. Soulellis has tried to define this common strategy as a sequence of “search, compile, publish.” Due to the coupling of free content available on the internet in ‘big data’ proportions with the inexpensive Print-on-Demand platforms, a new type of artists’ books has emerged – one that ‘scrapes’ or ‘harvests’ content from the Internet and re-work it into book format. Ludovico, after Soulellis, attempted to compile a draft taxonomy through three categories:

All the approaches presented above enable for the ‘transduction’ between the internet and the print  book, namely they take a sequential, or reductive part of the web and mould it into traditional publishing guidelines. It is often the case that this practice is undertaken to compansate for the imbalance between the colossal amount of information available instantly on the internet and the limited human capacity to process this information comprehensively.

The process of digitising everything is two-fold: it comprises of creating natively digital content and digitising analogue cultural objects through scanning. This dematerialisation, to quote Jacques Derrida, is “a very deceptive word meaning that in truth they are moving from one kind of matter to
another”. Ludovico pointed out the unique characteristics that digitised may possess – an example he discussed was a project by Stéphanie Vilayphiou, La Carte Ou Le Territoire (‘The Map or the Territory’), which exploits Google Book searches to find identical phrases across texts, revealing the ‘plagiarised’ nature of all writing.

Google’s efforts to digitise all human knowledge through the Google Books project are widely discussed in academia and otherwise. Initially advertised as a “dream of a universal library”, Google Books has been interpreted and unveiled for its own final goal, which is creating artificial intelligence. Google and the World Brain (2013), through interviews with people directly involved, investigates the whole scope of the project.

As opposed to the monopolistic inclinations of Google, Ludovico introduced individuals and groups which strive to digitise culture in order to facilitate the spread of knowledge, free of charge. To further illustrate his point, Ludovico used three examples from Italian hacker community : 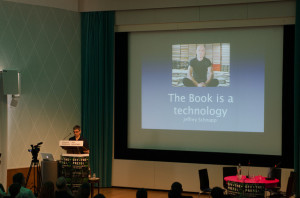 The statement above is embodied by the post-digital print, which reacted to and reflected on the advent and subsequent ubiquity of digitised texts. In order to survive to the online competion even newspapers since a decade have included more ‘data’ in their own visual structure than they ever did, in the form of big figure or sophisticated infographics. Examples go further, to name only a few: books by Marshall McLuhan, Jerome Agel and Quentin Fiore. The main question, then, is whether the internet is a new medium, or just an accumulation of all the ‘old’ media? Photographs, texts, video clips, all predate the internet. If not a ‘real’ medium, is the internet an agent, inducing radical changes in other historical media, but leaving their inner core intact?

You can find a PDF of his original presentation here: Presentation Alessandro Ludovico