The final session of the “Off the Press: Electronic Publishing in Arts” conference approached another side of the e-publishing field, namely what happens after the e-books are launched: where do we distribute, store and manage them?

In traditional publishing, perhaps the most iconic actor to play this role is the public library. However, as Mars pointed out in his talk, the public library itself is currently under a financial, social and political threat. Furthermore, there is still the question which actors can take up its role in the virtual world. Proprietary platforms like Google or Amazon have already stated their ambitions to become such global knowledge keepers, but this comes with the danger of intellectual copyrights and censorship. Mars, alongside with the other speakers of this session, discussed the existing alternatives: open, collaborative, non-proprietary platforms. How can they be designed to best fit the role of public libraries, and how should they adapt this role online? 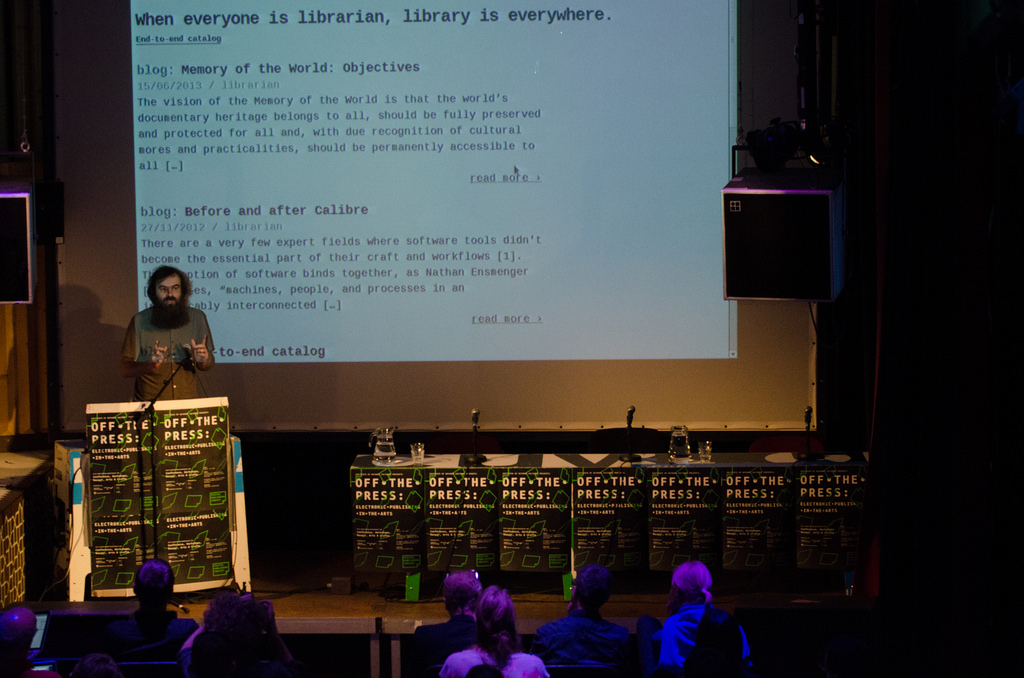 Mars is a hacker, activist and researcher with a strong interest in book sharing and book hacking. He began by explaining the very narrative associated with the public library concept. The latter, he argues, embodies humanity’s dream of an epistemological heaven. The thought of being able to generate knowledge about knowledge has always been an ideal often reflected in philosophy as well (take the example of Leibniz and his proposal to have a language so formal that it would explain and recreate everything – much like humanity’s hopes with the public library). In reality, however, public libraries were built after the French revolution in the 19th century and were far from the ideal of open access to everyone, argues Mars. In this sense, public libraries have always been gripped by politics – one example is that access is conditioned to being a citizen (have a valid ID card and residence within the city/country, which excludes vulnerable groups such as refugees or immigrants). The public libraries world-wide are furthermore constrained by financial cuts and even shut-downs. They are not able to buy books and borrow them, since publishers agree only on licensing contracts – a problematic proprietary regime.

In this context, what vision of public library should we strive for in the digital world?

Mars identifies three essential pillars of the public library that also translate to the digital ones: free access, a library catalogue and the librarian.

Mars strongly advocates for free access of resources for everyone, instead of access by means of identification. The library catalogue equivalent online is the web index, argues Mars. Essentially, whoever has a more powerful and refined way of indexing all the knowledge is in fact seizing it altogether. Google is currently the most famous player when it comes to indexing, in close competition with Amazon’s index. Monopolization is dangerous, warned Mars. Instead, he supports the idea of having many more, alternative and collaborative indexes, thus decentralizing the process of knowledge sharing. In this vision, anyone can become a librarian, and “when everyone is librarian, library is everywhere”. He gave the example of Calibre – a platform where users can manage their own e-books, convert to different formats, tag, search, share, download (but also purchase from publishers), and connect with other users. The major strength of Calibre, Mars points out, is that its technical design allows sociability. With Calibre, a user can connect any PC to the Calibre built-in server and thus has access to their e-book collection, as well as to the network of Calibre librarians everywhere. The capability to use independent servers rather than via third-party providers is also desirable in order to protect these online catalogues.

Mars also mentioned a number of other online collections and platforms for e-book sharing, among which are aaaaarg.org, LibGen, UbuWeb or Monoskop. While some are just online depositories, others host entire communities of librarians, researcher and readers. In the end, the purpose is not to have just one universal (digital) public library, but rather many small ones that work in a decentralized, collaborative manner.

Marcell Mars is one of the founders of Multimedia Institute â€“ mi2 and net.culture club mama in Zagreb. He initiated Public Library, GNU GPL publishing label EGOBOO.bits, started Skill sharing in mama + Skill sharing’s satellites g33koskop, ‘Nothing will happen’ and ‘The Fair of Mean Equipment’. His full biography here.