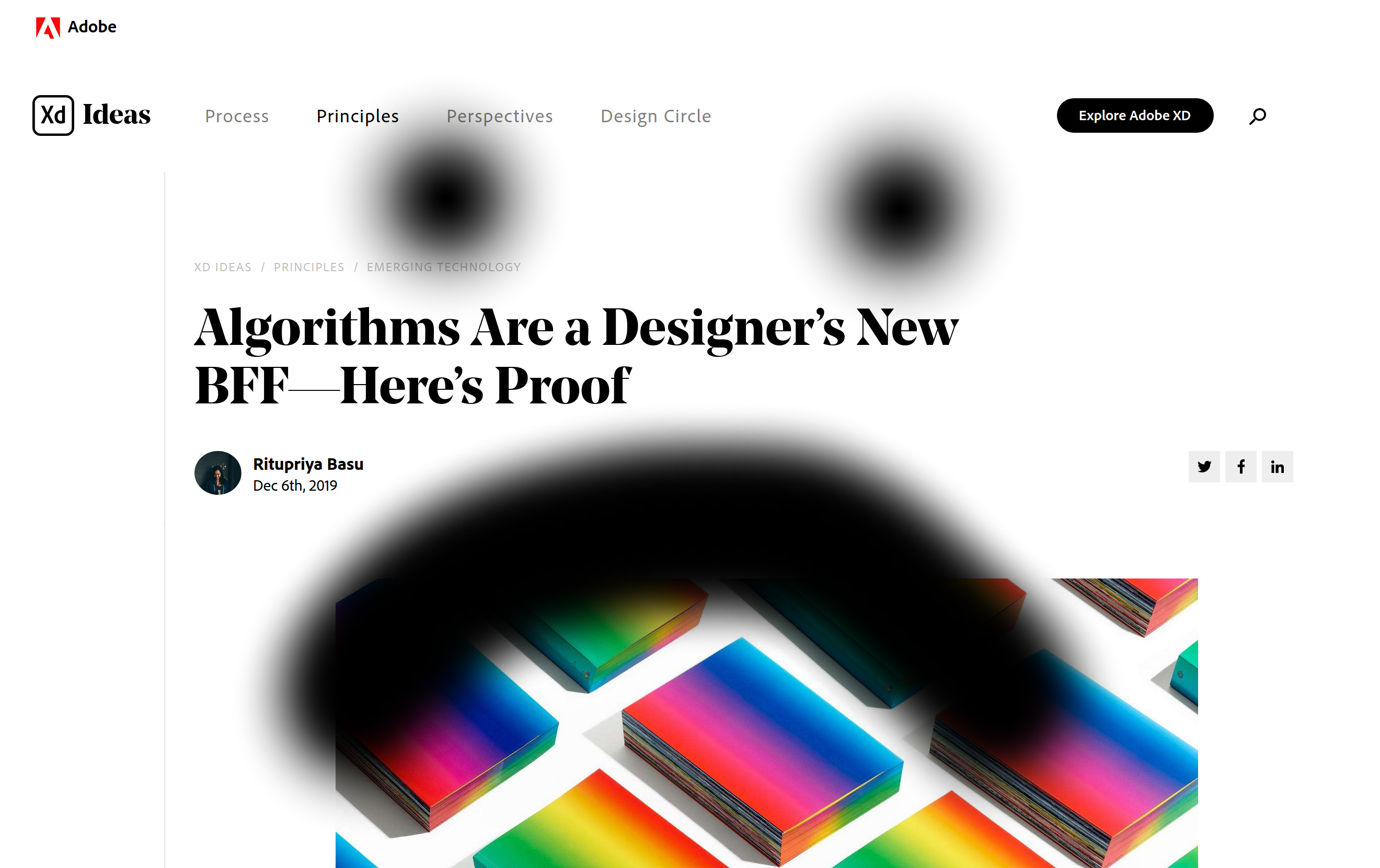 Some time ago, I was asked to answer some questions on automation and creative work for AIGA Eye on Design. I’m quite fond of this magazine, as it is deals with important topics such design education and it promotes laudable initiatives, such as a call for salary transparency. Fast forward one month and I find bits of the interview published on the Adobe blog (no one told me it was online). In the original inquiry there was no mention of a partnership with the company. If there were, I’d have declined the request, or at least I would have asked some money to be turned into Adobe infomercial (I’m a free software fan). Furthermore, the tiny bits extracted from the lenghty answers I gave are both misplaced and misquoted. The very text within quotes has been changed, and with that, its meaning. For someone who advocates the abandonment of any notion of quality (see answers below) the title “Why (good) designers are never going to be obsolete” sounds abhorrent.

As the about page of the magazine says, “AIGA Eye on Design covers the world’s most exciting designers—and the issues they care about”. Turns out I care about my time and ideas and who profits from them (whereas AIGA is a not-for-profit, Adobe is clearly not). This is why I’m disclosing this backstory and posting my answers in their entirety (I was quite happy with them anyway). Of course I’ll also ask the magazine to remove my name from the Adobe blog.

Automation and AI is painting a picture of a world where graphic design [or design in general] doesn’t necessarily require a designer. Do you find the future unsettling?

What I find unsettling is not so much the disappearance of the designer (which I don’t believe in and therefore doesn’t concern me much), but the effacing of human beings in general, those same human beings that contribute to the potency of AI systems. Here I’m not talking about a future scenario: the present is troubling enough. And we are part of it: think, for instance, of random users spotting things in pictures to show that they are human, only seldom aware that by doing so they might be training AI object recognition. Luckily, these dynamics as well as the reality of ‘ghost work’ (often carried out in emergent of damaged economies) is reaching mainstream thanks to the efforts of academics, such as Florian A. Schmidt and Antonio Casilli, and artists, like Sebastian Schmieg and Elisa Giardina Papa.

In your book titled Entreprecariat: Everyone Is an Entrepreneur. Nobody Is Safe, you discuss the impact of platforms such as Fiverr on the work of designers. When faced with commodification of design and template culture, what does the intellectual role of the designer look like?

The intellectual role of the designer was the topic of an essay of mine from 2017. My statement was more or less the following: the designer as intellectual is increasingly becoming a fiction, one that is fed by design schools and designers themselves. The supply is too big. For each designer that acquires once and for all the status of Thinker, there is an army of other ones inhabiting a purgatory of InDesign and Photoshop semi-automation, lack of professional recognition, 50 euros logos and 200 euros websites. Browsing Fiverr is like descending into this purgatory to find out that there are people who create book covers (with “unlimited revisions”) for 5 dollars. Shall we blame those people? Of course not, they are just doing what the technology affords them to do. Especially now that high-brow designers and design students themselves are starting to use Fiverr for the uncreative or semi-creative parts of their jobs. But we can blame the platform, as it is actively diminishing the value of the profession, as it did a few years ago when it published a sponsored post that asked: “why pay $100 for a logo?”

Most of the prescriptive tasks in the design process, such as selecting colours, typefaces, styles and layouts are already being dictated by AI. Which of ‘our’ [human] skills do you think are up next for automation?

Instead of focusing on skills, I’d like to say something about the way in which selection itself is presented to the user. I was recently stunned by a demo of a tool by Nvidia that turns simple sketches into realistic pictures. Things that are in a symbiotic relationship with each other (trees, clouds, rivers, etc.) become discrete entities. A mountain range becomes a brush, an option to select. I wonder: how does such a tool influence the way we think the world? Does it encourage a radical monadism where one can not only add individual things to an environment but also subtract features and emotions from beings (e.g. boy + youth + despair)? 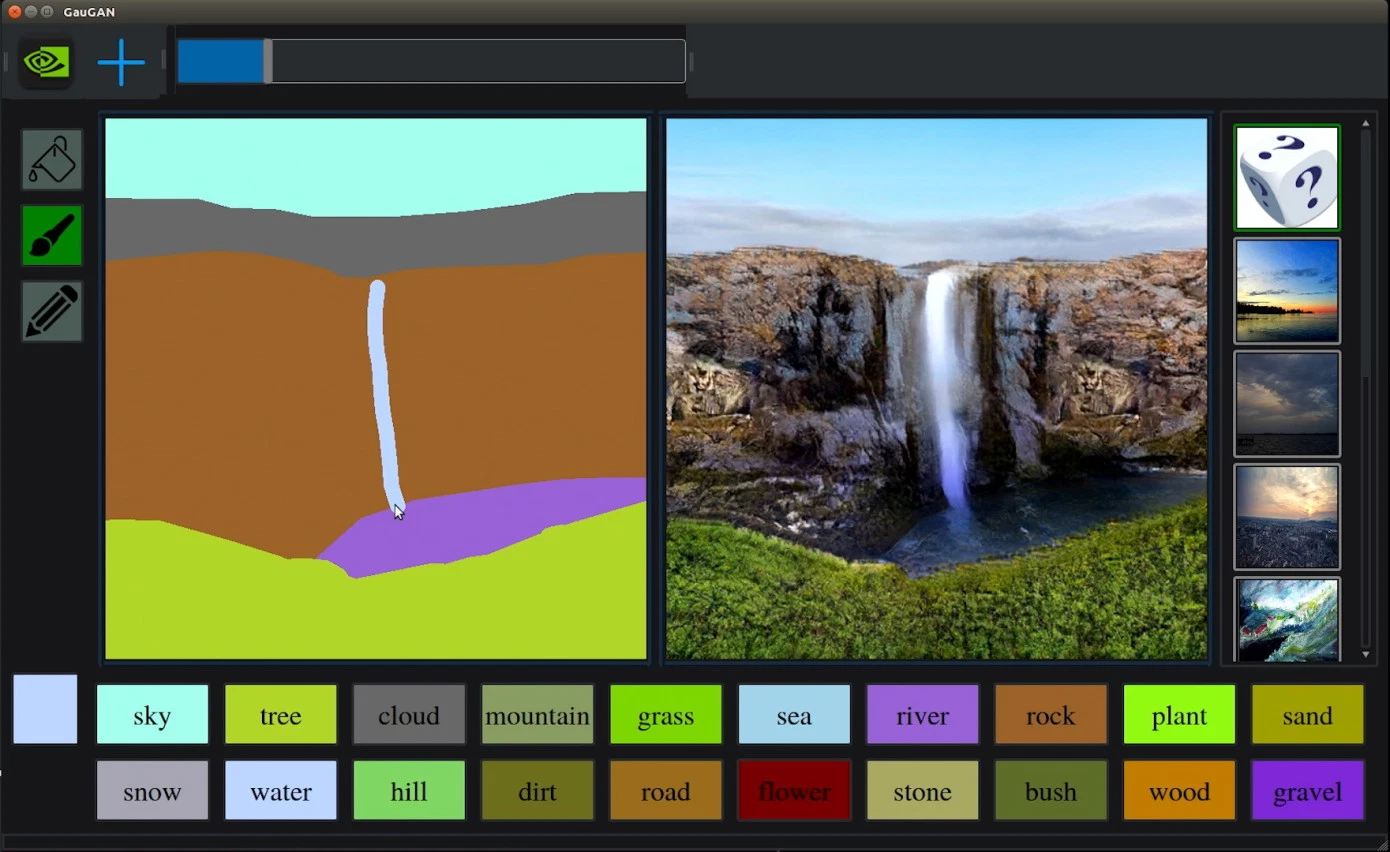 As AI shortcuts the digital design process, the future designers role will evolve to that of directing, selecting and fine-tuning rather than making and creating. Do you agree?

Again, this really depends on where one positions the future designer in the production chain. One doesn’t need AI to direct, select, and fine-tune. Selecting and directing is literally what art directors do, while fine-tuning is often what junior designers—and now gig workers—do. I look at the field of publishing and find out that it’s cheaper to outsource typesetting to workers in India than it is to develop an automatic workflow to do so, thusI suspect that full automation is still far away. If it’s true that many people still operate as the ‘semi’ in semi-automation, we should think of making and creating as heavily politicized activities, as something to claim or reclaim, not just as neutral professional shifts. How many designers—and workers in general—are nowadays able to make, to dedicate themselves to what Richard Sennett calls “a good job well done”?

If ‘everything’ can be automated/generated, what then becomes the responsibility of the designer?

A novel responsibility, adding up to the ones that the designer already had, involves the politics of generated content. Let’s say, for instance, that a simple Twitter bot posts a racist statement. In that case, the bot’s maker can’t justify themselves by saying: “it was the bot who did it”. Designers must do their best to anticipate the consequences of endless permutation and, as this is not always possible, take immediate action when things go wrong. In this sense, they have to ask themselves: “what is the logic of this machine I’m using? Where does this permutation come from?”

What kind of skills do designers need to acquire to use future tech to augment their practise, rather than letting it take over their craft?

I can’t think of any exhaustive answer to this question, so I’d like to offer a couple of intentions I’ve had for some time now. The first is to go back in time and study some early developments of computers, when the notion of augmentation and its limits were discussed. I’m thinking of the work of Douglas Engelbart, known as the inventor of the mouse, who dedicated his life work to “Augmenting Human Intellect”; to IA (Intelligence amplification) more than AI. The second is to travel to an even more remote time to reconsider the concerns that the Arts and Crafts movement had towards work and technology. In particular, I was struck by John Ruskin’s description of the nature of Gothic architecture. Ruskin differentiated between “servile ornament” (typical of Greek and modern architecture) and “constitutional ornament” (typical of Gothic and medieval architecture). As the former is obsessed with perfection, it assigns the tradespeople to extremely simple tasks that cannot be executed wrongly but, at the same time, curb the labourers’ will and inventiveness. On the contrary, constitutional ornament, while acknowledging a hierarchical relationship between the master and tradespeople, allows the latter to invent, make mistakes and therefore to be gratified with what they do. Do our intelligent machines treat us as serfs or as constitutive actors?

You’ve previously written that ‘in the near future automation and AI seem more likely to polarize the job market than suddenly rob out most professions.’ Would you say this polarization is of more concern than of the potential ‘obsolescence’ of designers? And if so, what can designers do to fight a scenario where the market is disparate and polarized?

Yes, definitely. Designers have developed their own “caste system”: the self-taught Photoshop whiz is not really seen as a colleague but rather as a kind of fraudster. I suggest dropping notions of quality, excellence and expertise altogether in order to expand as much as possible the definition of designer: from the senior art director at Pentagram to the occasional teenage meme-maker working on Fiverr, as they appear one and the same in the eyes of the platform. In this sense, “design is one” indeed.

What advice would you like to give young designers who are entering the industry at a seminal time, when automation and future tech is increasingly informing the evolving role of the designer?

The advice I would give them is the one I give to myself, as today’s professionals, young and old alike, re-enter the industry over and over: they are never set in once and for all. This is what I tell myself: try to find a balance between skepticism and enthusiasm, don’t become a grumpy reactionary but also don’t be paralyzed by techno-stupor. Try to be like an infant: in awe of new things and always ready to break them apart to understand how they work.